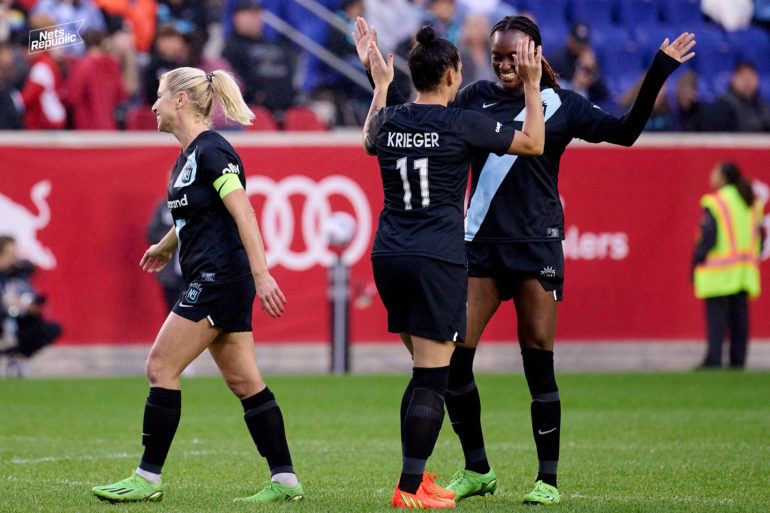 Gotham FC will look to get back to their winning ways in 2023.
Home
Gotham FC
Alexis Juarez

Five Things Gotham FC Can Do This Off Season

The holidays are here and now is the perfect time to make a wish list for NJ/NY Gotham FC. 2022 was a season to forget for Gotham FC. The team finished bottom of the table with 13 points, only recording 4 wins out of 23 games – their worst season since the rebranding of the team in 2021. The off-season has been and will continue to be a very important one for the team to get back to winning ways. Here is a wish list of five things Gotham FC needs to do during the off-season to get there.

The team’s most important acquisition during the off-season was the hiring of head coach Juan Carlos Amoros. Arriving from the Houston Dash, Amoros took the Houston Dash to a team record 4th place finish and a franchise-first playoff berth.

Last season, the team went through two coaches. They started their season under Scott Parkinson, whose style of play did not mesh well with the club. Under Parkinson, the team would often try to play possession football and play through the midfield where they tended to lose the ball often. There appeared to be a lack of creativity, and an inability to effectively move the ball forward. This led to the team trying to play the ball from the back, having the full-back send a through ball or cross to the winger in hopes that they would get to it before the opposing defender did.

Eventually, Gotham brought in interim head coach Hue Menzies. While the team did improve significantly on the pitch, they were unable to get winning results. Amoros could be the coach that can get Gotham FC back on track. His style is attacking football and employs a 4-3-3 formation to make it happen.

Amoros likes to get his entire team involved in the attack. Back at the Dash, he liked his defenders to move up the field rather than stay back, the midfielders to always win the ball back and apply pressure to the opposing player to force a mistake from them, and the forwards to play out wide to create more options in the final third. Gotham FC’s roster as it stands seems to lend itself to Amoros’ style of play.

2 – A New Central Midfielder To The Starting XI

When looking at the Starting XI from the top to bottom, Gotham looks great on paper. It is a team full of experience and talent, but an improvement in the midfield can be made, particularly in the center-mid position.

Gotham’s midfield had quite a tough season. There appeared to be a lack of creativity going forward and a propensity for turnovers, leading the team to rely on tactics such as sending the ball out to the winger in hopes they get to it before the opposition.

One player that was a midfield mainstay was team captain McCall Zerboni, who had to alternate between central midfielder and defensive midfielder, depending on who was playing alongside her. Throughout the season there were no lack of options for the 6 position however, the lack of a true 8 hurt the team. The team needs an 8 that is creative going forward to avoid another season of long balls.

While the Starting XI is looking strong, the team lacks is bench depth. Let’s start with the forwards.

The 9 spot is secured well with Onumonu and Taylor Smith. The right wing has Purce and Tucker but there are questions as to whether Tucker will truly be the backup to Purce due to the lack of minutes. The left wing has Monaghan and Kawasumi, but it is likely that we will see Kawasumi shifted to the midfield. A signing at the left wing is a must for Gotham during the off-season.

Since Zerboni has yet to officially re-sign with Gotham, there are currently only five midfielders on the roster. Signings will have to be made in these positions, especially since the midfield struggled tremendously in 2022.

Center attacking midfielders are Kristie Mewis and Delanie Sheehan, both play their roles well, and considering Amoros likes to play attacking football, these two should have no problems playing their roles. Another signing for a center defensive midfielder could help out Torres and Long. Finally, signing another creative midfielder to back up Pickett could serve the team well, especially since Pickett’s versatility could mean she is moved around the field as needed.

The right-back position is completely secured with O’Hara, Flores, Bruninha, and Jean. Jean will most likely be moved to the left as there are too many right-backs. The center-back position has plenty of experience with Krieger and newly signed Kristin Edmonds as the likely starting duo. Mandy Freeman is a solid backup but there are questions about Livingstone, who has only played one game for Gotham, coming off the bench as a substitute. The only left-back on the team is Dorsey. Since Jean is mainly a right-back, only playing left-back when Dorsey is subbed off, another signing could be made in this position to shore up the left side.

The No. 1 goalkeeping spot is up for grabs. It could be Michelle Betos or newly acquired goalkeeper Abby Smith in that spot next season. Hancuff is currently on loan to A-League side Brisbane Roar until the end of their season. With these three goalkeepers, there is no need for another signing.

The 2023 NWSL Draft is coming up soon and Gotham FC have three picks. It is crucial that the team make picks that shore up squad in areas that need improvement. Gotham should attempt to pick a left winger, center midfielder, and center back as these are the areas in which the team needs improvement and greater depth.

The players chosen by Gotham should be in the team’s plan for the future, considering the roster lacks youth. It would be good for them to stay with the team and learn from the experienced veterans on the team.

Gotham FC achieved the first free agent signing in the history of NWSL by landing two-time FIFA Women’s World Cup champion and Olympic gold medalist Kelly O’Hara with a multi-year contract. She previously played for the team back when they were called Sky Blue FC, appearing in 75 matches and scoring 15 goals. The move definitely caught many by surprise and it is a great addition to the roster.

The team also signed free-agent goalkeeper Abby Smith on a three-year deal. Smith previously played for the Portland Thorns, where she won the 2022 NWSL Championship. Smith will bring competition in the goalkeeper spot at Gotham FC now, competing with Michelle Betos and Hensley Hancuff when she returns on loan from the A-League.

Most recently, they signed center-back Kristen Edmonds from the Kansas City Current on a two-year deal, adding another veteran presence to the roster. Edmonds played all 21 games for the Current, starting 20 of them including the NWSL final.

There is still plenty of time to acquire another free agent and Gotham could add to their roster even further with veteran depth during this free-agency period.

For more information on Gotham FC, visit their website.