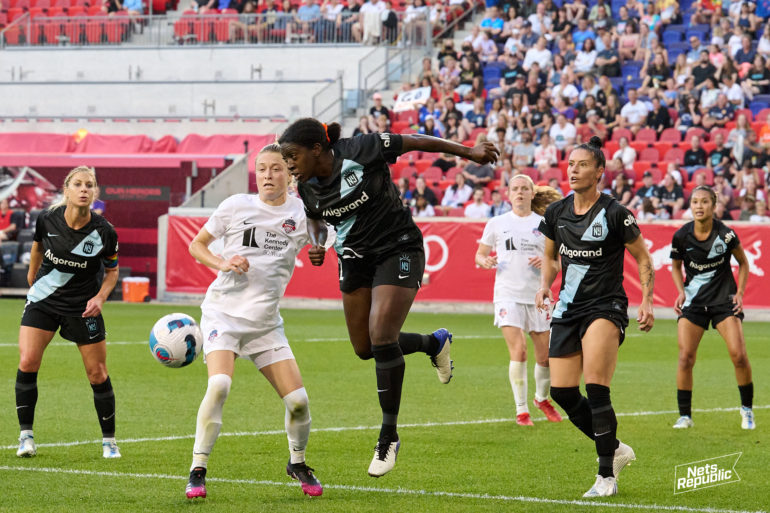 On Thursday, NJ/NY Gotham FC announced that the club re-signed defender Mandy Freeman to a two-year contract. The deal will keep the defender with the club through the 2024 NWSL season.  Freeman, a center back, has been a mainstay on Gotham’s backline. Her contract renewal comes after the club announced their new coach Juan Carlos Amorós and re-signed fellow free agents Ifeoma Onumonu and Taylor Smith.

“I’m excited to continue my career with Gotham FC,” said Freeman in a press release. “In my six seasons with this club, I have seen the growth and believe in the potential for us to be great. We have the best fans who show up for us every day, and we get to represent the amazing and diverse people of New York and New Jersey. Thank you for believing in me. I look forward to working with head coach Juan Carlos Amorós and being a part of the many great things this club will undoubtedly achieve.”

Freeman was drafted to the club, then known as Sky Blue FC, as the tenth overall pick in 2017. Since then, she has played in 80 matches and recorded 258 clearances, 56 blocks, and 109 interceptions.

“Mandy epitomizes everything we want Gotham FC to be,” said Gotham FC general manager Yael Averbuch West. “She is a reliable defender and excellent passer with a team-first mindset. Mandy has been a rock for our club and we are really proud she is remaining with us.”

On and off the field, the 27-year-old has been a symbol of resilience. In 2019, Freeman suffered an injury to her Achilles tendon, a season ending injury. She returned for the 2020 NWSL Fall Series. In the summer of 2021, Freeman picked up a knee injury which saw her sidelined for over two months. After another successful recovery, she re-entered the game day roster in October. She was a pivotal part of Gotham’s 2021 stalwart defensive unit, helping the team reach the playoffs for the second time in club history. In 2022, Freeman was a consistent starter for Gotham appearing in 17 matches and playing 1441 minutes.

Freeman’s two year contract is another promising sign for Gotham, a club that is looking to brush off their 2022 last place finish. With the off-season just beginning, there is certainly more to come from the team.

You can follow all of Gotham FC’s off-season moves with our tracker .