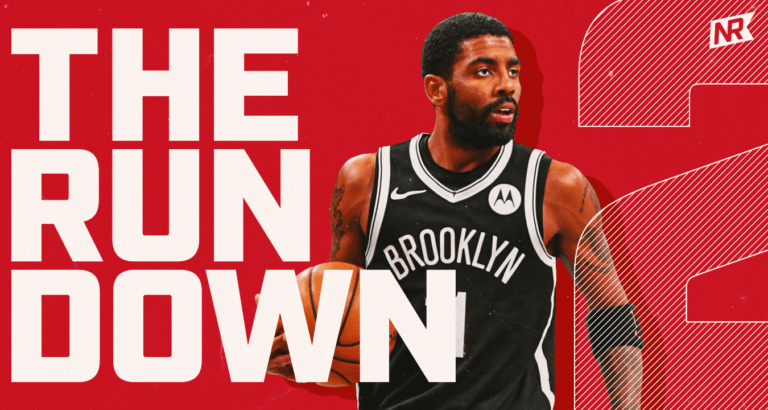 The Rundown: Highlighting Trends Through the Brooklyn Nets’ Slump

Well, I definitely can’t stand this week was as fun as the opening week of Brooklyn Nets basketball. Alas, there are still takeaways to uncover. Let’s get into it.

After what can only be described as a disappointing week of Brooklyn Nets ball, we’re still excited to bring you the second installment of The Breakdown, a weekly Nets film-based column focusing on the more under-the-radar details from the past week.

Jordan Having Trouble Catching the Ball

It should come as no surprise that DeAndre Jordan is being featured in a negative light for this week’s installment. His stint as a Net has been underwhelming so far, to say the least, and his play on both sides of the ball has left much to be desired from Brooklyn Nets fans, especially effort-wise.

Ever since Kenny Atkinson’s “mutual departure” in March, Jordan has started in every game he’s been active for. Jarrett Allen has seen more playing time as of late even though but he’s still technically the backup. It should also be noted that head coach Steve Nash has opted to play Jordan or even Jeff Green to close out games in crucial clutch minutes in the past week.

Jordan’s defensive effort and offensive wherewithal have been lackluster — but that’s a story for another day (we’re keeping this brief.) Right now, I’d like to focus on his inability to effectively convert one of the staples to Brooklyn’s offense: the pick and roll.

When the action is run by a prolific ball-handler and scorer like Kevin Durant or Kyrie Irving, defensive players usually give them the brunt of their attention. Thus, theoretically, leaving the rolling Jordan with an open lane after a pocket pass. Unfortunately, DJ has been bobbling passes lately, and if this trend continues the Nets’ offense could be turning the ball even more often than they already are.

Jordan seals on Capela well here with a little spin but is ultimately unable to corral the ball and the Hawks pick it right up. Not ideal.

A similar play here, except Jordan has to a completely wide-open lane to finish the play. His hands are in position but he gets butterfingers when it matters most. Luckily, John Collins sticks his hand in the cookie jar and DJ is able to draw a shooting foul. Considering his putrid shooting numbers from the charity stripe though, I’m not sure how much of a consolation prize that truly is.

The Brooklyn Nets’ offense isn’t struggling by any means. But ranking ninth in the league in offensive rating for a team that was supposed to be shooting like gangbusters is a little underwhelming. A plausible explanation for the Nets’ relative disappointment on offense is where their shots are — and aren’t — coming from.

Only 28.5 percent of the Nets’ attempts from the field are at the rim, according to Cleaning The Glass, well below the league average of 33 percent. Caris LeVert is surely a contributing factor, especially considering his love with the mid-range push shot. He rarely forces the issue going to the hoop like he once did.

On the other hand, we have Irving. No matter the issue, Kyrie is going to be an enigma. Even with his prolific shot-making abilities, I can’t help but feel that Irving needs to tone down his shooting for the betterment of the team. He often dribbles into multiple defenders early in the shot clock to hoist one up, and it will often fall through the net. Still, his crazy fadeaways don’t justify him taking three more shots over Durant (who is undoubtedly the more lethal offensive player) per contest, or leaving your teammates hanging from the corner.

Let’s end this one on a positive note. Joe Harris has been firing with renowned confidence and from ranges never-before-seen this year, which he has partly attributed to the leadership of Durant and Irving. These two plays before simply would not have taken place next year under the tutelage of different staff, seeing as Joey Buckets usually found his shots through a set or designed plays within in the offense. Now, the Nets have the freedom to play creatively and find opportunities themselves, even the shots aren’t drawn up from the sideline.

Obviously, his marksmanship from behind the arc helps put points on the board for Brooklyn, but the sharpshooter’s astute stroke impacts the game for the Nets even when he doesn’t have the ball. Just look at Harris’ gravity in the clip above on the fastbreak: Davis Bertans is too hesitant to leave Harris and commit to the ball, gifting LeVert with an open dunk on his way to the rim. I think even he was surprised at how much space he had there!

That’s it for The Rundown this week, thanks for keeping up with the series! This upcoming week is going to be interesting with Kevin Durant quarantining due to the NBA’s Health and Safety protocols, but I believe it will prove to be a fun week of Nets basketball nonetheless.