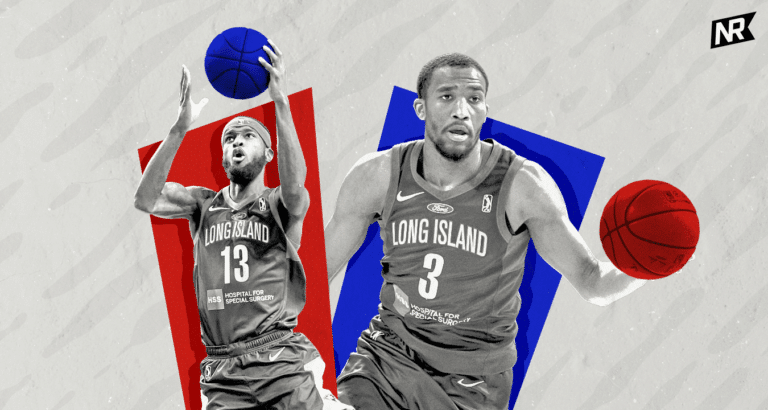 Going into the NBA G League bubble in Orlando, fairly lofty expectations were on the Long Island Nets to compete. Expectations were built further with the likes of Reggie Perry, Jeremiah Martin, BJ Johnson, and Tariq Owens all confirmed to feature on the roster.

After an opening day victory over the Iowa Wolves, the Nets suffered two straight defeats to round-out week 1 in the bubble. The two losses came at the hands of the Lakeland Magic and Greensboro Swarm, respectively.

BJ Johnson leads the team in points per game, with 19, closely followed by two-way guard Reggie Perry (18.7). The latter sits top in rebounds (10.3), with Jeremiah Martin leading the way in assists (6.7).

Long Island are committing 16.3 turnovers per contest, and are struggling shooting-wise from beyond the arc. From range, they’re converting at a 28.1% rate.

The Long Island Nets sit middle of the pack in Offensive Rating (103.8) but sit 3rd-bottom in Defensive Rating (113.7). As their defensive presence on the court has marred performances in the opening week of the 2021 season.

In the season opener, the Long Island Nets won a closely fought contest against the Iowa Wolves to go 1-0. BJ Johnson scored a team-high 24 points on 8-13 shooting, along with 4 rebounds, 1 steal, and 1 block. While two-way forward Reggie Perry recorded 20 points, on 7-10 shooting from the field. Alongside his flurry of points, Perry had 7 rebounds, 4 assists, 2 blocks, and a steal.

Long Island raced out to a quick 20-4 lead, with the score sitting at 41-21 at the end of the first quarter. Iowa cut the deficit to 12 in the second, bringing the score to 70-59 at the half. The Nets’ lead shrunk to as much as 4 mid-way through the third, with the Wolves eventually tying the proceedings going into the final frame, 99-99.

To start the fourth, Long Island scored 14 unanswered points in the first 2:58 of the quarter. The Wolves battled back again to tie it up 128-128 with 31.8 seconds remaining, Elie Okobo then drained a huge 3-pointer to propel the Nets to victory, 131-128.

Okobo finished with 13 points, 3 rebounds, and 9 assists, as the Nets had seven players in double-figure scoring. As a team, Long Island shot 50.5% from the field, and at a 38.9% rate from downtown.

Guard Jeremiah Martin topped the scoring for the Long Island Nets in this one. He finished with 21 points, on 8-14 shooting, 6 assists, and 2 steals. Reggie Perry contributed 15 points, 11 rebounds, 7 assists, and a single block. While BJ Johnson scored 18 points, alongside 7 rebounds, 2 assists, and 1 steal.

It was a back-and-forth contest early on but the Magic got hot with a 12-5 run over a 2:41 period to take a 35-27 lead going into the second. The Nets then chipped away at the scoreline to trail 59-54 at the half. The momentum continued for Long Island, as Johnson tied the contest with 4:47 remaining in the third. After three quarters, the Nets were able to hold a slim lead, 76-75.

Even though the lead was extended to 6 points less than a minute into the final frame, the Magic responded and went ahead 90-88 behind an Andrew Rowsey 3-pointer. Lakeland never surrendered the lead from there, and went onto win 106-100. The record at this point, 1-1.

The Nets struggled shooting from the field, with a 41.9% conversion rate. From beyond the arc, the team were 27%. Long Island were outscored 56-44 in the paint and possessed 16 turnovers.

Reggie Perry had another big performance in this one, scoring 21 points and grabbing 13 boards. With BJ Johnson recording 15 points, 6 rebounds, and 2 assists.

Instantly, the Long Island Nets were down 7-0 but showed some fight to get back into the game after a slow start. However, Greensboro pulled away to hold a 30-23 lead at the end of the first. At the start of the second, the lead increased to 15. The Nets showed some fight with a 9-2 run, led by Perry who scored 7 points, heading into the half with the deficit sat at 4.

Despite bringing the energy, Long Island struggled on the defensive end and the Swarm extended the lead to 8 going into the final frame, 85-77. Greensboro never looked back and went on a 14-2 scoring run in 4 minute period, and eventually won the contest by a wide margin, 123-95.

“Tough game for us, but we didn’t help ourselves either. Our defense has to be our rock, it’s what will carry us when we’re having tough times,” Long Island Nets Head Coach Bret Brielmaier said to reporters after the Greensboro Swarm loss. “This team won’t make excuses, we’ll come back at it tomorrow.”