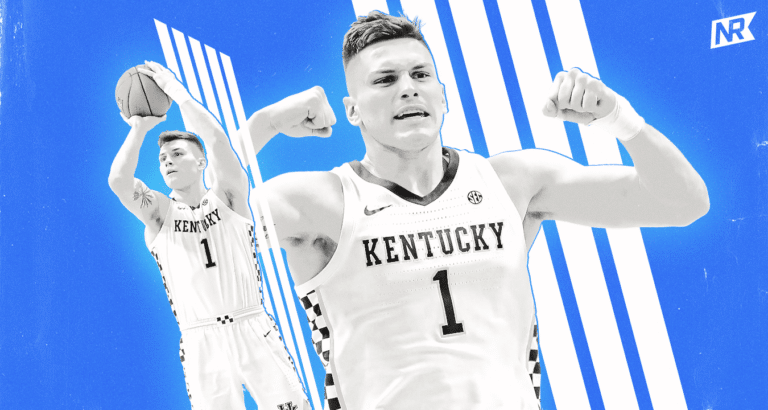 Nate Sestina will step up the professional ranks for the very first time after spending five years at the collegiate level. Between 2015-19, the 23-year-old represented Bucknell University. As a senior, he enjoyed a breakout campaign, posting averages of 15.8 points, 8.5 rebounds, 1.2 assists, and 1.1 blocks, in 31 games.

On 3.4 attempts per contest, the 6-foot-9 forward/center converted at an impressive 38 percent from 3-point range during the 2018-19 season. Following the season, Sestina entered the transfer portal and subsequently joined the University of Kentucky as a graduate transfer for his final season of college eligibility (2019-20).

With the well-renowned Wildcats, the Pennsylvania native featured in 28 games in the cut-short 2019-20 campaign. In those games, he averaged 5.7 points and 3.7 rebounds, in 19.8 minutes played per contest. His lights-out shooting from beyond the arc continued, as he shot a career-best 40.7 percent.

Sestina’s Step up to the Professional Ranks:

After going undrafted in the 2020 NBA Draft, Nate Sestina signed an Exhibit-10 deal with the Brooklyn Nets. On December 11 he was waived and joined the Long Island Nets’ roster for the 2021 G League bubble in Disney World, Orlando.

In a media availability prior to the G League bubble, Nate Sestina described the opportunity with Long Island as being “super humbling”. He also stated his excitement to return to the court, as the Nets face an intense 15-game schedule in just 24-days.

“I come from a really small town so just being able to call myself a professional basketball player now is very humbling. Playing at two prestigious institutions at Bucknell and Kentucky has been humbling for me as well. I’m just really excited to get this thing going.”

“It’s been almost a year for me playing organized basketball, so I’m just ready to go,” the 23-year-old said. “I think the league has done a fantastic job. Starting with the NBA and the WNBA, and just moving into this. I just think we’re all thankful to play again, and play for something that’s a lot bigger than us. To play for the organization and play for our families.”

Furthermore, the versatile big provided some insight into the current make-up of Long Island. A roster that is headlined by the returning Jeremiah Martin, CJ Massinburg, and Shannon Scott. Alongside newcomers Kaiser Gates, BJ Johnson, Tariq Owens, Paul Eboua, and Elie Okobo.

“Our veterans are great and super experienced. They’re great teachers as well, great teammates, and good leaders,” Sestina stated. “We’re all excited to put a jersey on, put some shoes on and go play. It’s been so long for a lot of us. Guys are itching. Practices have been great, everybody’s high energy, high motor.”

Jordan Bowen joins Sestina as a rookie on the Nets, while two-way flexible assignments, Tyler Bey and Nate Hinton, feature on the Long Island roster, from the Dallas Mavericks.

Even though he can be considered an undersized big at 6-foot-9, Nate Sestina possesses a large frame that should allow him to compete, both offensively and defensively, at the professional level. Expect intense action in-and-around the rim, as the rookie battles for rebounds and second-chance looks.

His high-energy offensive skillset is highlighted by a strong transition game and polished touches in the paint. But all eyes are on his ability to stretch the floor and shoot from range. A trait that’s highly coveted in the modern-day.

Through 128 collegiate games, for both Bucknell and Kentucky, Sestina converted at a 37.4 percent rate from 3. His ability to operate as a spot-up shooter and out of pick-and-pop situations, makes him an intriguing prospect moving forward.

When asked about his shooting, Nate Sestina mentioned that it’s something that he and Long Island Head Coach Bret Brielmaier have been focusing on ahead of the bubble season. “Coach Brett, he’s messaged me, sent clips, we’ve talked about it a lot. He said ‘ you’ve got a flamethrower, you got to let that thing go’.”

“He said ‘if you leave a game with a full clip, that’s on you’. They’re very confident in me. Having a front office and coaching staff that’s confident in you should give you ultimate confidence when you go out into the game and play.”