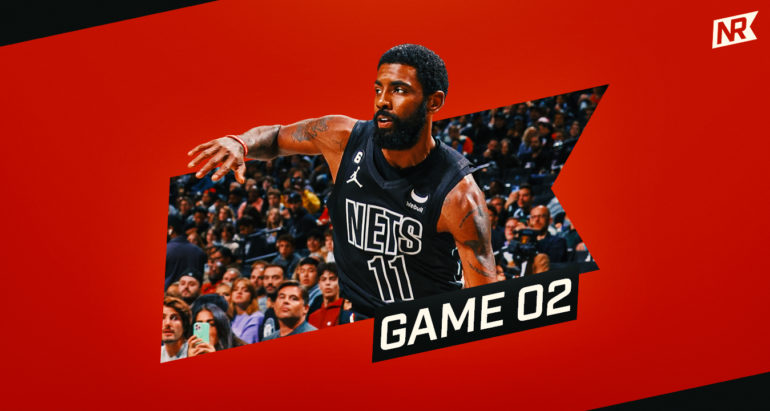 Coming off an embarrassing opening loss to the Pelicans, the Nets took the floor against the Raptors on Friday. Brooklyn came in with some reinforcements, as sharpshooter Joe Harris made his long-awaited return. The rivalry game was as much chaos as it was exciting, resulting in the Nets’ first win this year.

Both teams started off solid offensively, but the Nets had the opening edge with the early 28-24 lead. In a balanced attack, Kyrie Irving and Nic Claxton led the way with five and four points, respectively.

The second quarter belonged to Toronto, which took a 52-49 lead into the half. Pascal Siakam was dominant, scoring 12 points in the quarter on 62.5 percent shooting. Brooklyn meanwhile reverted back to some of the sloppy play seen on Wednesday, with numerous turnovers and defensive breakdowns.

The third quarter was a rollercoaster. Brooklyn came out firing with a 9-0 run to start the half, but Toronto did not quit, responding with runs of its own each time Brooklyn gained some separation. Kevin Durant led Brooklyn’s scoring with 12 points in the quarter. Still, Toronto led 79-78 heading into the fourth quarter.

The fourth quarter belonged to the artist himself. Like a magician, Irving found ways to score and carry the Nets to the finish line while also dishing key assists. However, much like the third quarter, Toronto did not going away. With less than a minute to go, the game was tied 102-102. With the game on the line, Durant and Irving were relied on to make the right plays and ice the game. Durant hit a three to take the lead, and Irving dished an assist to Royce O’Neale for the dagger.

Thrillingly, the Nets held on for a 109-105 victory for their first win of the season.

Claxton continues to show that he’s taken a step as a player in his development. Against Toronto, Claxton showed a flurry of offensive plays that he added to his bag during the offseason. From acrobatic layups to being a full court one-man attack, the Clax attack was nearly unstoppable. He’s also displayed improved passing, making the right reads and decisions to keep the offense efficient.

Claxton was also a brick wall on the defensive end. In a great effort to defend the rim, Claxton recorded four blocks and displayed a great ability to switch and guard smaller guards like Fred VanVleet.

If Claxton is to be the answer to the center position issues the Nets have had in recent years, the team needs him to play at this level consistently.

Team Effort and Glimpses To Come

After a sloppy debut, the Nets needed to control their turnovers and play better defense. Though the turnovers were still higher than many would like (13), the team showed growth. More importantly, the Nets displayed how free flowing the offense can be with a huge emphasis on ball movement. Though there were a few Durant and Irving isolations, Brooklyn displayed multiple offensive sets and plays predicated on motion and ball movement. Those sets and plays led to efficient offense and great scoring opportunities.

The new and improved offense spread the scoring out, even though Durant (27 points) and Irving (30) still shouldered a heavy load of the offense. Claxton finished with 19 points and Patty Mills with 10 along with key contributions from Royce O’Neale and Ben Simmons.

Simmons played a key part in facilitating the offense, quickly leading the way into transition and nearly notching a triple-double with six points, eight assists, and 10 rebounds. More importantly, though, Simmons’s ability on defense was key in contributing to the Nets’ victory.

On the other end, the Nets displayed their newfound length and showed that they can step up defensively. Defense was something that was hard to come by in recent seasons, but the team’s activity and length was clear to see as the Nets only switched when necessary and were able to cover great lengths of the floor with ease. The team also took it upon itself to defend the better than they had against New Orleans, though still allowed 46 points in the paint.

After going 1-1 in the two-game home stand, the Nets will go on their first road trip of the season. First up on the trip will be a stop in Memphis to take on superstar Ja Morant and the Grizzlies on Monday. Brooklyn will look to stop the red-hot Morant and try to build momentum on the young season. This will be another good test for the Nets, as they will be playing another 2021-22 playoff team and will try to snap a six-game losing streak against the Grizzlies stretching back to 2019. Tip-off at Fedex Forum will be at 8 p.m ET and can be watched on YES Network.