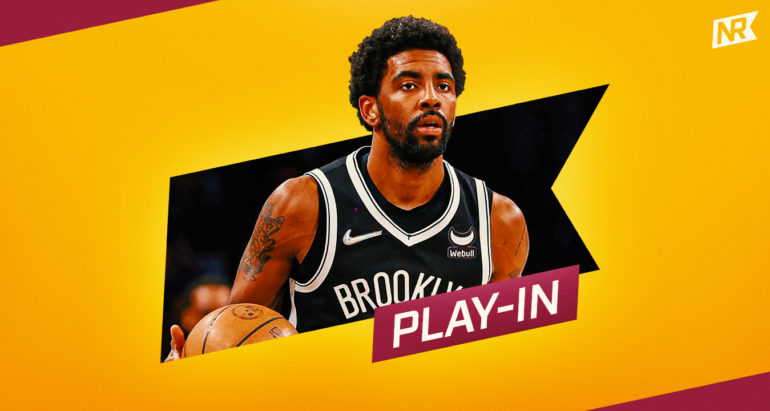 Brooklyn fans can rest easy. Through all the noise and drama, the Nets solidified their spot in the NBA playoffs with a 115-108 win over the Cavaliers on Tuesday night. On a day that started off with a dark cloud over the borough of Brooklyn, the Nets were able to take care of business on their home court.

With the pressure squarely on the Nets entering Tuesday, the point of emphasis was to see how the team would start the game. Well, the Nets hit the ground running with an offensive explosion in the first quarter. It was a balanced effort that saw every starter aside from Seth Curry score six or more points in the opening frame. What truly spurred the Nets’ offense was their level of intensity on the defensive end. No play perfectly encapsulates this point better than the sequence in which Kevin Durant rotated over for a monster block, spurring the Nets in transition and ending in an Andre Drummond dunk plus the foul.

The 7/11 duo had it going as well. At one point, Durant and Kyrie Irving scored 15 straight points for Brooklyn in the quarter.

The Nets took a 20-point lead into the second quarter, where the offense came to a screeching halt. With Durant on the bench, the second unit, led by Irving, struggled to produce offense; the team only mustered two points during the first five minutes of the quarter.

Sloppy play and careless turnovers contributed to the offensive woes with the team having a hard time just staying inbounds. However, the 7/11 duo was once again there to steady the ship, combining for 13 of the team’s 17 points in the quarter. Irving himself had his own seven-point scoring burst, which was capped off by a baseline buzzer-beater.

The second half started off fairly well for Brooklyn as Irving connected with Drummond on a couple of slick passes for dunks. The struggles on offense had ceased, but the intensity on defense started to wain. Even though Brooklyn built as large as a 22-point lead, the Cavaliers continued to fight and chip away much as they did in the previous meeting between these two teams. At one point in the fourth, the Cavs cut the lead to as little as six points. However, as good as Darius Garland was, the Nets had Durant. A few timely buckets were enough to seal the game away for Brooklyn.

The story of the night was easily the dominance of Irving and Durant, and that was not even their best performance together. The two stars got it going early and fed off one another as the game progressed. They led the charge for Brooklyn on offense and did it at near-perfect efficiency, combining for 32 first-half points on 13-for-14 shooting. Irving went 9-for-9 in the first half while Durant went 4-for-5.

Irving continued his hot shooting deep into the second half, but his quest for perfection was foiled in the early stages of the fourth. For the game, Irving finished with 34 points on 12-for-15 shooting while Durant poured in 25 on 9-for-16.

As impressive as their scoring efforts were, their playmaking and facilitating were equally as good. Both players tallied double-digit assist totals as Durant (11) and Kyrie (12) combined for 23 of the team’s 33 assists. Every time Cleveland blitzed off the pick and roll or sent a double at one of them, they calmly found the open man. It is one thing for this duo to kill teams with its scoring, but if it can also get its teammates involved as well, it just makes it that much more dangerous to deal with.

To put it in perspective, the two scored or assisted on 80% of the team’s buckets.

The Bruce is Loose

Outside of Brooklyn’s dynamic duo, the next best player on the floor for Brooklyn was Bruce Brown, something that has often been the case since the All-Star break. Brown has been playing at a level that dwarfs even his production from last year.

One area where Brown is absolutely thriving is in the short roll. Every time the Cavaliers blitzed Durant or Irving off the pick and roll, they calmly found Brown in the short roll, where he would either take it himself or hit Nic Claxton for an alley-oop lob. Brown’s keen ability to seemingly always make the right decision is a big part of why he has had some gaudy assists totals as of late.

It was another stat-sheet-stuffing night for Brown (18 points, nine rebounds, eight assists, three steals). He also had a hand in a few other defensive plays, as well. Since his role has been solidified, Brown appears to be playing with a little more freedom. The energy he brings to Brooklyn each game will be key for this team as it progresses in the playoffs.

Although there were quite a few positives from this win, there are also some negatives. Brooklyn showed that when it is clicking, teams will have to bring high offensive firepower to keep up with them. When you have two of the most gifted scorers in history on the floor at the same time, things sort of come easy on that end. Not to mention Seth Curry did not even score in this one, which most likely will not happen again.

The problems, however, appear on the opposite end of the floor or when one of the stars is off the court, mainly Durant. Brooklyn’s struggles in the “Kyrie-only” minutes are nothing new and something that needs to be tightened up. Whether that’s a change of personnel on that second unit or just more attention to detail, the Nets can’t afford lulls like what they experienced in the second quarter against higher-level competition.

Another area of concern is the Nets’ ability to maintain big leads and put teams away. Too many times this season the Nets have built up big leads just to let the opposing team hang around and eventually come back. Sure, the Nets can flex their muscle at a moment’s notice. The key, however, is keeping those muscles flexed and the foot on the gas.