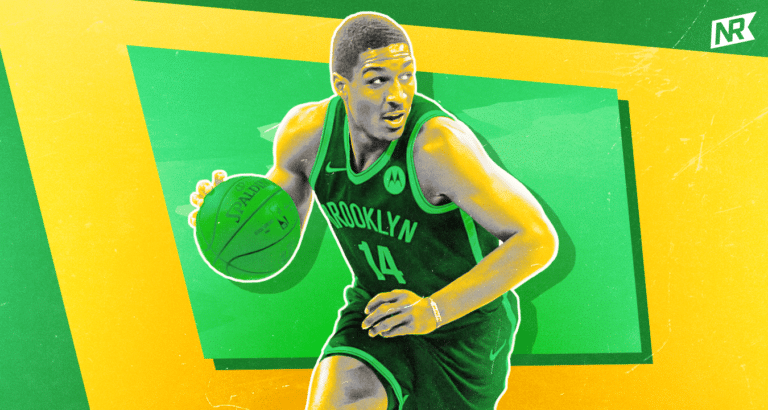 Film Study: What Does Reggie Perry Bring to the Brooklyn Nets?

Reggie Perry, the 57th overall pick in last year’s draft, is getting some serious playing due to the Brooklyn Nets’ paper-thin center rotation. Lucas Kaplan whipped out some film to analyze if this is a good thing or not.

You may have heard, but the Brooklyn Nets’ blockbuster trade for James Harden left the squad thin in terms of front-court depth. For the moment, at least. Sean Marks and the Nets will have nearly $12 million to conquer the buyout market with. Defensive-minded big men and power wings will likely be on the agenda come March. But until a further roster move is made, Reggie Perry will continue to see consistent playing time. The 6-foot-9, 250-pound big man is in the rotation out of necessity, though that may not be the only reason.

The Nets’ coaching staff and players had nothing but consistent praise for Perry coming out of training camp. Teammates cited both his work ethic and skillset as impressive, especially for a player taken in the latter half of the draft. While Jeff Green heaped praise on the rook, he also noted it may be a challenge for Perry to crack the rotation. Well, that was before the Nets made a four-player-for-one trade in acquiring Harden. In the past two games, both victories, the Mississippi State product tallied a total of 35 minutes. Perry starred as the back-up center to DeAndre Jordan, although he did log limited minutes alongside Jordan vs. the New York Knicks. In the immediate future, Reggie Perry will have an integral role on many bench units the Nets roll out.

Above all, Perry is a persistent rebounder. College players that excel on the glass can be tricky cases. Some dominate the boards because a natural athletic or height advantage overpowers diminutive-by-comparison NCAA talent. After just 35 minutes of non-garbage time action, it’s already clear Reggie Perry is not one of those players.

The 2020 SEC Co-Player of the Year averaged 10.1 rebounds per outing for MSU; he must have boxed out on each and every one of those. Because that’s all Perry wants to do on an NBA court. As soon as a shot goes up, on either end, Perry begins to position himself for the miss. On the defensive end, you’re not going to catch him ball-watching. He’s going to put find a body and get low. For a Nets team that’s been eaten alive on the defensive glass at times this season, that’s Perry’s most valuable trait.

Offensively, Perry exerts the same energy, He’s quite opportunistic, creeping towards the paint with each attempt, even if he starts the play on the perimeter. This missed three from Timothé Luwawu-Cabarrot starts with Perry 18 feet away from the basket:

This play also highlights a tendency of Perry’s when he does touch the ball in paint: he’s not stagnant. The rookie is a fan of taking a power dribble or getting into a hop-step as he does above. In other words, his feet aren’t going to stay planted to the floor as he gets bodied by larger opponents. At “just” 6-foot-8, he has counters against tall, springy shot-blockers, including this pump-fake he uses on Julius Randle:

Yet, despite the bucket there, it seems a bit curious Perry did not try and dunk that ball off the catch. It could, though, be an example of Perry knowing the limitations of his own body. See, for all his strength and mass, he is not a truly explosive vertical athlete. Thus, his habit of getting into textbook rebounding position becomes all the more important. And while it’s not the most only tool for an interior defender (see: Marc Gasol) a lack of vertical explosion will limit Perry’s effectiveness as a help shot-blocker anchoring bench units. He can certainly be a solid defender, but fans will be disappointed if they are expecting to see shots pinned to the glass or sent out of bounds:

This isn’t to say Perry is not a plus athlete, though. He’s just more of a grounded athlete who combines exceptional strength with fluidity in his movements. For a man as thick as he, it’s a sight to watch him move laterally and cover ground the way he does. That mobility will give Steve Nash and the rest of the coaching staff freedom to play different defenses with the bench unit. Reggie Perry does not need to stick to the paint. The rookie contained an array of Julius Randle spin moves and jabs while facing the Knicks. He also did an impressive job, particularly for a rookie, staying vertical to contest shots. This play from Saturday highlights an ability to move in space his frame suggests he might lack:

Perry profiles as an intriguing front-court sidekick to DeAndre Jordan in the right matchup. Nash even played the pair together briefly vs. the Knicks, though that could have been a result of having nine active players. Regardless, that lateral mobility could jolt Perry into some time at the four. So does his ability to shoot the ball.

During his sophomore season at MSU, the bruising big man connected on 32 percent of his threes, as well as 76 percent of his foul shots. Perry’s large hands and otherworldly upper-body strength suggests he may struggle shooting the rock, but those numbers, as well as sound mechanics, indicates the opposite. What was even more encouraging in Perry’s minutes this past week was his willingness to shoot the ball. There was no hesitation to pull when given the opportunity. And judging this flawless pick and pop vs. the Knicks, I don’t see a reason for him to hesitate:

Reggie Perry will continue to log minutes for the Brooklyn Nets. The constant stress of a title chase will be spelled by the fun and promise a rookie inspires. If Perry is playing real minutes come playoff time, things have either gone horribly wrong or unbelievably right. In the meantime, tracking the development and impact Perry makes might tell us if Sean Marks and the Nets scouting department discovered a diamond in the rough of the late second round.