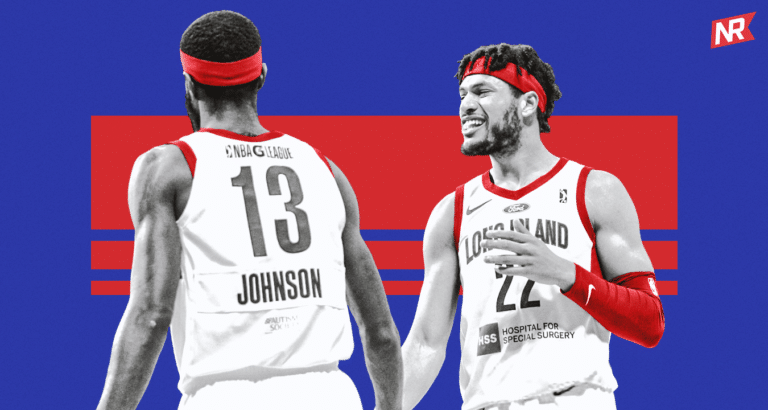 In a Highly-Anticipated Matchup, Long Island Nets Pick up Win Over Ignite

In a highly-anticipated match-up, the Long Island Nets picked up a huge win against G League Ignite on Monday. With the victory, the Nets’ record improves to 3-5.

The AdventHealth Arena in Disney World, Orlando set the stage, with Long Island edging out Ignite 24-20 to end the first quarter. In the opening frame, BJ Johnson and two-way big Reggie Perry each had 7 points.

Ignite were held to 33.3% shooting from the field early on, as the Nets extended their lead to 15 at 4:39 in the second quarter. After a Nate Sestina 3-pointer, the Nets’ opponents mounted a 15-6 run to set the score at 54-48 heading into the half.

Long Island were firmly in control until Ignite pulled within 4 points with 5 minutes remaining in the third (68-64). This was behind a 7-point stretch from former Brooklyn Net, Donta Hall. Bret Brielmaier‘s side then went on a 10-5 run to finish the quarter strong. Going into the final frame, 78-69.

Despite Ignite shooting 66.7% from the field in the fourth, their comeback attempt failed, with Long Island scoring 11 points off 8 turnovers, outscoring Ignite 31-28. Overall, the Nets scored 28 points off 23 Ignite turnovers. The final score, 109-97.

The Long Island Nets picked up their third win of the season and held G League Ignite to a season-low 35 field goals. The team had a 52.1% conversion rate from the field and outscored Ignite in the paint, 54-42. Additionally, the Nets had 27 assists to their opponent’s 19.

In a post-game Zoom call with reporters, Long Island Head Coach Bret Brielmaier emphasized that it was just another game against Ignite, “We prepared for them just like every other team we’ve faced thus far in the bubble.”

“This is always about us, never about our opponent, it’s us continuing to work on improving as a team,” Brielmaier added.

Brielmaier also spoke about two-way assignment Reggie Perry’s continued development in the bubble, “Reggie’s learning to play every game and every minute he’s on the floor, at a higher level.”

“I think today you saw even more flashes of that and when you do, you can see just how dominant he is. He just continues to grow and improve, we’re seeing it game-after-game.”

The Long Island Nets are next in action on Wednesday, February 24, as they take on the Agua Caliente Clippers at 7.30pm ET.