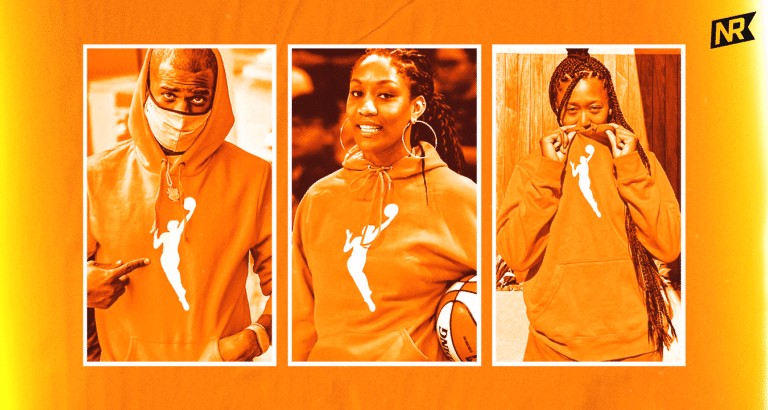 WNBA’s Orange Hoodie: How Kobe Bryant Made It the Fashion Statement of the Year

The WNBA orange hoodie became a huge fashion trend in 2020. Named “Fashion Statement of the Year” by the Sports Business Journal, it became the best-selling merchandise item in league history.  The late icon, Kobe Bryant, had a hand in elevating the success of the now-iconic sweatshirt.

According to the Business Case For Women’s Sports podcast, this all began with Eb Jones, who was hired in February 2019 as the Head of Content and Influencer Strategy for the WNBA. Jones was tasked with rebranding the league with a new logo and creating content year-round on their social media platforms despite the short 36-game season. Jones, given just two months to complete this project ahead of the 2019 WNBA Draft, got to work.

Creating Merchandise with The New Logo

Jones was unhappy with the products available on Fanatics.com, a website partnered with the WNBA to produce licensed sports merchandise. Thus, she found a customization agency to exclusively design gear with the new logo that would appeal to the league’s fashion-forward athletes, as well as their dedicated fanbase. Jones began creating entirely different merchandise for the upcoming draft. Her team planned to give the players an article of clothing to incorporate the WNBA’s upcoming look, because the jerseys had already been printed with the old logo.

Jones wanted the players to wear an item that all fans could buy, which meant they were available in youth, female, and male sizes. At the time, only four items on the website were available in all three sizes. Jones, at first, was reluctant to choose the orange hoodie because the WNBA plays in the summer, which would make it uncomfortable for players to wear long-sleeved attire in the heat. But something in the hoodie just spoke to her, so she sent them to all the athletes and coaches to wear after the 2019 All-Star Game.

The Orange Hoodie Becomes Famous Among the WNBA Players

A’ja Wilson was among the first to rep the new apparel during a game. Wilson wore the hoodie courtside, while sidelined due to an ankle injury. The rest of the players loved it. After that game, many of the WNBA players were seen wearing the orange hoodie, and the trend was born within the W family.

Here’s where it really took off: once the league’s top talent began wearing it, Jones sent hoodies to WNBA-supporting influencers as part of a coordinated publicity campaign. She sent merchandise to Jemele Hill, Robin Roberts, Gabrielle Union, and more prominent celebrities.

Kobe Wears the Orange Hoodie at a Game

A few months later, Kobe Bryant went to the WNBA office to discuss plans for the upcoming season and offer his help in elevating the league. Jones created bags of merchandise for him and his family, including the new hoodie among the gifts. Knowing that Bryant often sported thousand-dollar Armani suits, Jones knew it would be a long shot to get him to don the sixty-dollar hoodie.

On December 24th, Kobe was seen sitting courtside at the nationally televised Lakers game with his daughter, Gianna, while donning the WNBA orange hoodie.

“The rest was history,” Jones said. “That literally was the moment that cemented [the hoodie] not only with WNBA fans and people that supported the WNBA, but that cemented the orange hoodie as a fashion statement.”

That March, merchandise sales were up 220 percent and many NBA stars such as LeBron James, Chris Paul, Trae Young, and many more have been seen repping the iconic WNBA orange hoodie. Late last year, Fanatics said that the hoodie has been the best-selling WNBA item of all-time. This, along with all the other terrific merch the W has to offer, has shown the impact of branding on a growing league.