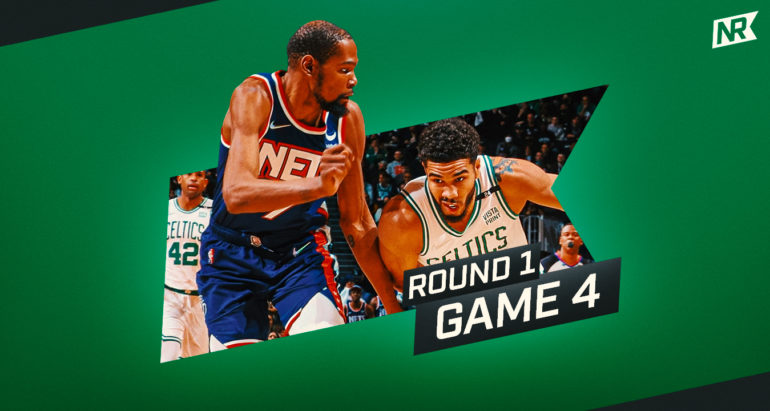 After a debilitating Game 3 defeat, all eyes fell on how Brooklyn would respond in a win-or-go-home situation. Would they roll over and die, or fight until the bitter end?

Despite a valiant effort, the final result unfortunately would mark the end of a season that was never meant to be.

Game 4 did not start off on the greatest of notes for the Nets. The referees were calling any and everything to the tune of 10 first-quarter fouls against Brooklyn. Seth Curry alone picked up three fouls in the opening frame, all of which were questionable.

Despite some early shafting by the officials, Kevin Durant appeared to remember who he was. Durant started the game with an energy and fire that had not previously been there in this series with his 11 first-quarter points set the tone on offense. Nic Claxton, who replaced Andre Drummond three minutes into the game, also displayed some fire and aggressiveness. The young big was active in the paint and drawing fouls. Unfortunately, his free throw woes continued and turned out to be one of the themes of the night. Claxton shot 0-for-6 from the line in the first quarter en route to a 1-for-11 night from the charity stripe.

Despite being saddled with early foul trouble, Curry finally made his presence felt in the second quarter, connecting on a few jump shots. The problem, however, was on the other end of the floor, where Boston got whatever it wanted. The Nets allowed Tatum to get favorable matchup after favorable matchup, and he made them pay. And if it wasn’t Tatum hitting a tough bucket, it was a second-chance putback or corner three. A Grant Williams corner three with one second left in the second quarter put the Celtics up eight going into the half.

Brooklyn shot better than Boston both from the field and three-point line in the first half, however, their woes from the free-throw line and on the boards were the big reasons they trailed. Boston outrebounded Brooklyn 25-17 in the first half and made 10-of-11 free throws to Brooklyn’s 6-of-13 shooting.

The third quarter wasn’t too kind to Brooklyn, either. Although Claxton started the quarter, his struggles from the line continued and the Nets’ offense started to sputter. Tatum started turning it on again and the Celtics were up double digits in a flash, seemingly on their way to blowing the doors off the game.

However, Brooklyn hung tough. A Seth three at the end of the quarter cut the lead to 12. That sparked an extended 9-0 run that got the Nets back within striking distance. Leading the offensive charge in the fourth were not Durant and Irving, but Seth Curry and Goran Dragić, with the two combining for 15 of the team’s 34 points in the frame. Dragić at one point scored eight straight for Brooklyn.

But the Nets just could not get the timely stops they needed, even with Tatum fouling out with just over three minutes remaining in the game. The Nets cut the lead to as little as one with under two minutes remaining, but after a Jaylen Brown layup, Durant missed what would have been a game-tying three and a free throw on the ensuing possession, thus leading to an Al Horford tip-in. A late Marcus Smart free throw iced the game, resulting in a 116-112 defeat.

Here are a few observations from the game and some final thoughts:

It’s unfortunate to say but the two guys pegged to lead the franchise to the promised land failed in this series. As noted earlier, this was Durant’s best performance all series. which is saying something. Although Durant did score 39 points, it took him 31 shots to get there. Very unusual for a guy Nets fans have gotten used to seeing shoot at godly efficiency levels. But credit the Celtics for devising a game plan to make him uncomfortable.

Even still, at least No. 7 went down swinging and appeared to do all he could in this one–on the offensive side, that is. Defensively, Durant had another rough outing, which has been the case most of the series. Poor rotations, bad closeouts and just a lack of attentiveness are traits people are not used to seeing from a guy with All-Defense capabilities.

Moving over to the other half of the 7/11 duo, it seemed to all go downhill for Irving following his tremendous Game 1, and Game 4 was the icing on the cake. In a win-or-go-home game, one would expect Irving to try and put on a show, especially in front of a home crowd. Irving lacked that killer instinct that was on full display in Boston for Game 1. There were times in Game 4 where it looked like Irving could exploit a matchup, but instead settled for a jumper or passed it out. A 20-point, five-rebound and five-assist night is not terrible, but it was not nearly enough.

There was never a time when it looked like Irving was fully engaged in the game–only glimpses. And on defense, Irving almost seemed to go rogue, especially when off-ball. Too many times Irving would come to double or was late on switches, resulting in an easy bucket. Those types of defensive lapses can be glossed over if Irving is putting on a dominant offensive performance, but when he is not, his mishaps on defense are magnified.

It is difficult to pinpoint one word to describe how Claxton played in this one. On one hand, he played arguably one of his best games of the year. He was nearly terrific on defense and did his job on the offensive end with some dunks, putbacks and just overall aggression. On the other hand, one could say he singlehandedly lost the game for Brooklyn with his abysmal shooting from the free-throw line. Claxton missed 10 consecutive free throws before finally sinking one in the second half. It got so bad that the Celtics actually went to a “Hack-a-Clax” for a possession. The Nets as a team missed 12 free throws, with Claxton contributing to 10 of them.

It is not fair to solely put the loss on Claxton; there were other things throughout the game that the Nets could have done to make those misses not make as large an impact. But for the second game in the series, Claxton’s shooting deficiencies played a big role in a Nets loss.

Looking on the bright side for Claxton, he was great on defense. Whenever he was matched up against Tatum, Brown or one of the guards, he made them work. He did a nice job using his length to contest shots and stay down on pump fakes near the rim. Claxton’s defense and energy were solid all series, so it is a shame he did not see time in the starting lineup.

It would be a great disservice if the efforts of one Blake Griffin were not recognized. The leader of the Blue Collar Boys and fan-favorite made an impact on Game 4 much as he did in Game 3. However, it was not his shooting that galvanized the crowd and team, but his effort plays and hustle. In fact, Griffin did not score in Game 4, but he did have four assists, three rebounds and drew a handful of charges. It is almost basketball malpractice that it took so late in the series for Griffin to get some minutes, but in his brief stint during this series, he showed as much heart and grit–if not more–than anyone.

As the book is closed on the series and the Nets’ season, it goes without saying that the 2021-22 campaign can be looked at as an utter failure. Despite the drama during the regular season, the Nets went into the playoffs with championship aspirations and were swept not only by a division rival, but a team they beat in last year’s playoffs. To be swept in a series while having arguably two of the three best players in the series is embarrassing. Yes, the Nets were close to victory in a few of the games and the final point differential is less than 20, but it felt like a one-sided series since Tatum’s buzzer-beater in Game 1. Boston made the big plays when it mattered and Brooklyn did not. Simple as that.

The lack of fight and leadership from Durant and Irving was especially unprecedented. The fact that Bruce Brown was the leading scorer in one of the games and Irving failed to reach 20 points twice in the series is almost unthinkable. Even the most optimistic Celtics fan could not have really anticipated that Boston would win in a sweep.

If nothing else, this series sweep should serve as a reality check for everyone: Nets players, the organization, and fans. You can’t cheat the grind. There will be big decisions coming this offseason and the roster will most certainly look quite different next year. Despite the disappointment of this season, this is not the end of the championship window for Brooklyn. Durant is signed for the next few years and Irving, love him or hate him, will most likely be right alongside him. Then there is the question of what is going to happen with Ben Simmons?

Do not fret, Nets fans. As you are well aware, the sun will rise again.