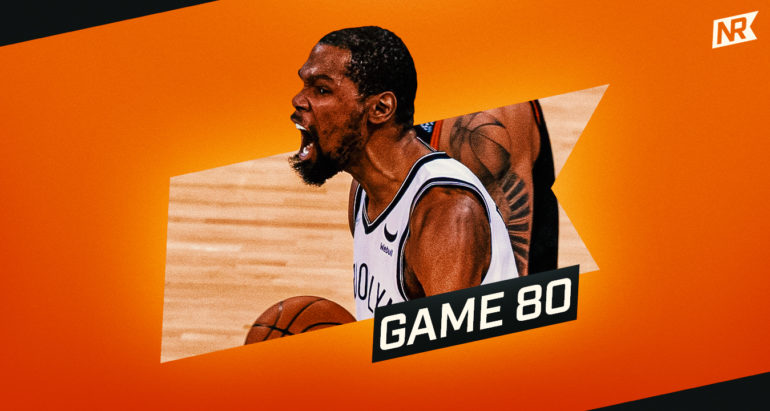 For the first time in their careers as Brooklyn Nets, Kyrie Irving and Kevin Durant shared the court as teammates in a game at Madison Square Garden against the New York Knicks. During the previous meeting between these two rivals, Irving was courtside to view Durant’s 53 point masterpiece at the Barclays. This time, the duo led the Nets to a comeback win at the Garden, sweeping the Knicks on the season.

Seth Curry got off to a hot start in his return to the lineup, scoring eight points immediately. Brooklyn took control early, knocking down open looks while maintaining a small lead. However, New York closed the quarter on a 10–0 run, holding a 29–25 advantage into the second period. Brooklyn’s lack of energy cost the team during the first half, allowing the Knicks to dominate in the paint and from the perimeter.

The woes continued on both sides of the floor during the second quarter. While Brooklyn struggled to find a rhythm, New York shot the lights out from distance, pushing the lead to double digits. Durant and Irving played with little intensity, failing to lead the Nets during important stretches. A lack of defensive discipline hurt the Nets every time they tried to chip away at the deficit. Time and time again, New York found a way to get second and third chances. As those piled up, their lead continued to balloon as the clock wound down. Heading into halftime, the Knicks led 67–50 over a seemingly lifeless Brooklyn squad.

In the third quarter, Brooklyn was still struggling. Multiple times, they had opportunities to cut into the Knicks’ lead, but simply could not. Some questionable foul calls also played a role in Brooklyn being unable to find a groove. Regardless, there are no excuses for how poorly the Nets played throughout large chunks of the game. Every possession was either rushed, or failed to find the open man. Towards the end of the quarter, Durant finally became more aggressive, knocking down back-to-back three pointers. With 12 minutes left to play, the Nets only trailed by 10 after being down 21.

As lackluster as the team looked all night long, something awakened inside the squad during the fourth. Patty Mills came alive with a couple of threes, and an Irving steal turned into a violent dunk from Durant, sparking some energy after a dormant performance. Within a couple of minutes, the Nets only trailed by one point.

Brooklyn did regain the lead, but it was short-lived. After Durant put the team up by three, the Knicks responded effectively. Obi Toppin and RJ Barrett had their way, putting New York in front and maintaining a small lead during most of the fourth quarter. That being said, Durant simply would not let Brooklyn return home with a loss.

Steve Nash made an unusual adjustment, placing Durant at the center position. Nic Claxton had five fouls, and with Drummond also in foul trouble, Nash went with a small ball lineup. It worked to perfection, as Durant made several outstanding defensive plays, alongside facilitating for Brooklyn at a high level. Curry and Mills both hit clutch shots down the stretch, and the Nets pulled away as “Brooklyn” chants were heard loud and clear.

For the second time this season, Brooklyn came back from a 20+ point deficit in Madison Square Garden. Despite the rough night, the Nets put it together during the final period in an impressive manner. The final score: Brooklyn, 110; New York, 98.

Can Brooklyn Be Taken Seriously?

It is nearly impossible to figure out the Nets identity. In one half, they will play like a lottery team—no chemistry, poor communication, and lackluster efforts across the board. Then, out of nowhere, the team shows their ability to hold an opponent to only 31 points in a half. A lot of this rides on the fact that Brooklyn is built around their superstars. When Durant and Irving struggle, the whole team loses heart. During the first half, neither KD or Kyrie could find a rhythm. It wasn’t until the late third quarter that Durant showed some emotion, and started looking for his stroke. Once that happened, the Nets unleashed a flood that the Knicks had zero answers for.

If Brooklyn wants to make a serious playoff push, the team has to play with intensity from tip-off. We’ve seen them do it before, (i.e. March 10 vs. Philadelphia)—there are no excuses. The bottom line is that KD and Kyrie are capable of beating just about anybody. Not only that, but defensively, the team can lock opponents up when they feel like it. After New York scored 67 in the first half, the team could barely score 30 during the final two quarters. Moving forward, Brooklyn has to compete at an elite level throughout the entirety of the game, because making a comeback is never guaranteed. With the seventh seeded Cleveland Cavaliers coming to town on Friday, Brooklyn has a chance to claim home court advantage for the play-in. The ball is in their court.