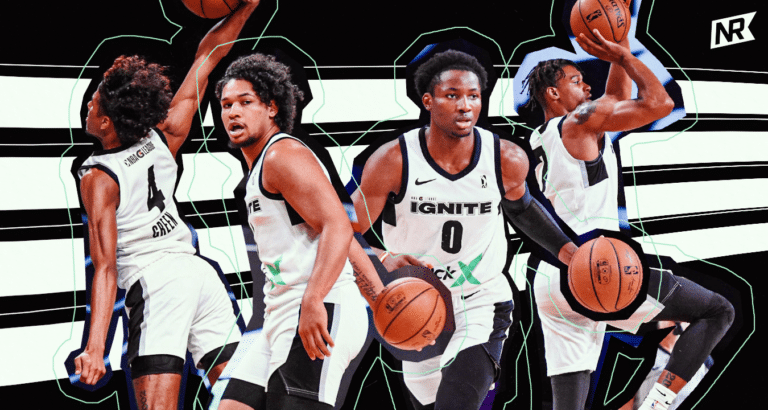 This season, the G League has launched a new team, created to give future NBA prospects a chance to showcase their talents while also getting paid to play the game. That team, G League Ignite, faced off against the team that we here at Nets Republic cover, the Long Island Nets, on Monday, so I thought that would be a great opportunity to watch some of these prospects for the first time and provide some thoughts on them.

The players on the G League Ignite squad that we’ll be looking at are Jonathan Kuminga, Jalen Green, Isaiah Todd, and Daishen Nix. Two other prospects on the team either have not played yet or aren’t getting enough minutes to really focus on, while the rest of the team is made up of veteran players like Jarrett Jack and Amir Johnson.

And just to be fully transparent here, I’m not a draft person, so I’m going into this with no knowledge of these players. Consider this my first look at them, but I love the concept of this team and am excited to dive into Monday’s game.

Alright, let’s go. Here are my initial takes on the four G League Ignite prospects. And just to note, I’m writing this as I watch the game, so each section of thoughts is chronological. Thought that would be a fun way to approach this.

Also, he’s not a prospect so I don’t have full thoughts on him, but Ignite’s Donta Hall is very good. Impressive play after impressive play all game long.

Some aggression early on defense. Commits a foul one time. Gets a steal another.

Shows some good dribbles and smartly passes up threes at some points, but struggled early to convert those shots. Started 0-for-4, including a few plays where he drove inside and either missed in the paint or missed a dribble jumper from midrange.

Ooh, mid-first quarter, Kuminga with a nice cut to the basket, where he finishes through contact.

Ahh, there we go. Gets the ball on the block, makes some nice moves, and draws the foul. Want to see Kuminga working in the post more.

Kuminga with a nice turnaround fadeaway late in the half. Nice to see that aggression.

One Sentence Halftime Thought: Maybe I didn’t catch the best Kuminga game — there are flashes here, but the first half was a bit of a struggle at times.

Yikes, Kuminga with an early second-half turnover. And then a missed pull up. And then gets burned on defense.

Just noting that it’s been awhile since Kuminga has been on the floor. Nearing the end of the third.

Alright, we have the whole young crew on the court for the fourth! This will be fun!

And it was, as Kuminga drains a three off a pass from Nix!

Tries to drive inside, then stops to make the pass. Throws the ball to Long Island.

One Sentence Final Thought: I see it — I see what makes Kuminga a top prospect, but I didn’t really get to see it all come together in this game like I wanted to.

Green is incredibly explosive and athletic, even if it wasn’t always converting into numbers. Made a nice pull-up three in the first quarter.

Smoothly moves down the floor, even if he has some issues finishing at the bucket early on. Looks like he’ll be a problem for opposing defenses in transition at the next level.

(There was way too much Bobby Brown early for G League Ignite. Wanted to see the ball in Green’s hands more in the first minutes.)

Jalen Green went up to grab a defensive rebound. He didn’t get it, but he jumped extremely high! That vertical!

Little later in the quarter, Green takes a mid-range pull up that looks a lot like a Kevin Durant mid-range shot. Swishes in.

Oh man, Green is just so fluid. Hits a three off of a hand-off and it was one of those “well, he made it” shots where you knew it was in before it left his hands. Just such a smooth shot.

Ugh, was about to type about him driving in and finishing through a lot of traffic, but he was called for an offensive foul. Still, he just seems to soar when he was the ball.

I am running out of ways to say that Green is impressing me.

Kuminga drove inside and then had to stop because of the defense, so he hit Green on the outside, who drills home another three.

Mid/late third, Green’s the only of the prospects on the floor. Is that because him + veterans gives Ignite the best chance to win games?

Oh man, another catch-and-shoot three. This is a good day for him.

And another three, his fourth of the game. And then another, his fifth. This is a master class from Green.

Oh my, made a nice bounce pass to Hall, which ends up with Hall at the free throw line.

One Sentence Final Thought: Jalen Green is a very good basketball player and is going to be a good NBA player.

Todd comes off the bench for G League Ignite, but as soon as he’s in the game, you can feel the energy.

Todd takes a catch-and-shoot three but misses it. However, Ignite gets the offensive rebound via Amir Johnson, and Todd comes barreling in, cutting down the open lane and slamming the ball down:

Makes a nice baseline fallaway jumper that the broadcast says is “becoming his calling card.” Hard for defenses to account for that.

Shows some good defensive awareness. Picks up a steal, then on the other end does that fading turnaround on the baseline again. Really impressive shot for him. Gets the defense dizzy.

Going into the second quarter, the broadcast notes that Todd was not in ESPN’s most recent mock draft. Maybe I’m not watching enough college basketball or something, because he looks like an NBA player.

Does seem to force shots some, though.

One Sentence Halftime Thought: Good half here for Todd, who seems to know how to find his spot and looks like someone who should be drafted.

Alright, some second half minutes for Todd here. They are not quite as good as the first half ones were. Seems to have some trouble shaking away from the defense. Misses that turnaround he was money on in the first half. Does make a nice offensive rebound, but can’t get the put-back attempt to go.

Thought Todd was contesting a three well, but looks like he just made some contact with the shooter. He checks out.

Todd comes back in for the final two and a half. Comes up with a big block just after checking in.

One Sentence Final Thought: Up and down play from Todd, but his best moments were NBA-quality minutes.

Nix checks in late in the first quarter for G League Ignite. Turns the ball over early on a missed pass towards Amir Johnson, but looked nice handling the ball on the play.

Not the smoothest first few minutes, but does use his size to back into the post and get deep position and draw a foul, even if he doesn’t finish the play.

At least in the first quarter — I’m writing this live-blog style, so this can change — Nix was the prospect who I didn’t really see the most from, but there were some really solid moments from him.

One Sentence Halftime Thought: Scoring wasn’t really there, but I really like his upside as a passer!

Some nice footwork in the post from Nix, but is doubled on the play and gets blocked.

Solid play in the final couple of minutes once the game was out of hand, including getting his own rebound at the end of the game and putting up the layup.

One Sentence Final Thought: Looks like he can be a nice passer at the next level, but would really like to see some more of him before I really decide where I’m landing on him.

I’ll spare any more words about the individual players since you can find those above.

Instead, I’ll close this piece by saying that I really love this concept of having this G League Ignite team. It’s always good to see players with more opportunities to be compensated for their work! And they get to play against opponents that are better than college teams, which should help them acclimate to the NBA. This was fun.