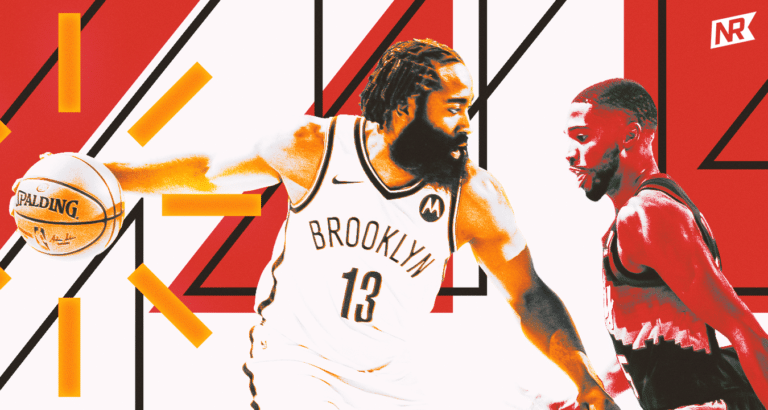 Steve Nash reveals more and more of his coaching ideology with each game for the Brooklyn Nets. The true test is still months away, but there are a couple conclusions to be made on Nash’s core principles. The main one is his ideal for the Nets’ late-game offense, which is based on five-out arrangements. These line-ups rely on Jeff Green, who is top-40 across the NBA in fourth-quarter minutes.

This philosophy, along with some high-end talent, no doubt, has driven the Nets to the third-strongest fourth quarter offense in the NBA. And it was the driving factor behind a franchise record-setting comeback in Phoenix on Tuesday night.

The Brooklyn Nets offense, regardless of the ever-shifting lineups, starts games friskier than it closes them. For one, there’s more player motion early. Nash and OC Mike D’Antoni have made a concerted effort to warm up Joe Harris‘ legs from the opening whistle; you’ll see a ton of pin-downs, flare screens, and handoffs using Harris to kickstart the offense. Brooklyn also starts games playing at a much faster pace, a trend that falls off a cliff by crunch time.

It’s not a bad idea to slow the game when you can let James Harden go to work. On Tuesday in Phoenix, though, with Kyrie Irving and Kevin Durant sidelined, the Nets relied on Harden’s offense all game. Nash made a defensive-minded gamble by starting Bruce Brown and DeAndre Jordan. The decision took away space on offense in the hopes of stifling the Suns on the other end. It didn’t work. The halftime score read 75-54. The Nets defense couldn’t stop a nosebleed, although, to be fair, Phoenix wasn’t helping them out much by caring to miss any shots.

As for the offense, those 54 points, while nothing to scoff at, are below the 2021 Brooklyn Nets’ standards, even with their stars out. Much of that was due to clogging; playing two non-perimeter threats simultaneously mucked up Brooklyn’s attack:

The Harden-Brown pick and roll (PnR) is complicated by DeAndre Jordan’s presence in the lane. And while Brown does find a sliver of airspace to fire off his floater, it’s just cramped. Even with Brown on the perimeter and DJ rolling, Phoenix was able to dedicate three or four sets of eyes to James Harden with the ball in his hands.

Isolation situations presented a similar problem for the Nets; the Suns were able to overload the ball-side and were prepared to send help early. Again though, James Harden is a Get Out of Jail Free card. He’s going to get his, regardless. His offensive talent allows Steve Nash increased lineup flexibility, even if it didn’t work out in the first half vs. Phoenix.

Late in the third, Steve Nash made his first substitution that left only one of the Brown-DJ duo on the floor. It was the stopgap between what we saw in the first half, and how the Nets closed out the game. Harden + roller + three shooters was the engine to elite Rockets offenses for years, and it’s easy to see why.

Here, Jordan comes to set the high ball-screen near the logo, and as his defender comes with him, the paint is vacated. So, That area now becomes available for Harden to attack, DJ to roll into, or, as we see above, cutters to fill. The court opens up, the Nets offense breathes a little easier.

However, while the Harden-DJ PnR has been effective offense for Brooklyn all year, it does hamstring the offense in some ways. The PnR introduces a second defender to one of the unguardable 1-on-1 players in NBA history. It provides Phoenix options: The Suns could switch it, and at least help way off of DJ to aid the switchee, or they could trap and force James Harden to give the ball up. Either way, Phoenix isn’t allowing Harden full dictation of the play.

The Brooklyn Nets In Clutch Time

When the Nets get to clutch time, Steve Nash strips the offense down to its bones. Only the essentials are necessary. The off-ball screening action that often propels the ball from one side to the other, Joe Harris running like a maniac along the baseline, that mostly calms down. Jeff Green enters the game as a five, and the Nets stretch defenses apart with 5 magnetic poles on the perimeter. Despite his gaudy 43% mark from distance, teams are still somewhat willing to cheat off of Jeff Green. But his help defender still has to make the migration from the arc to the paint.

It’s a lot to ask of Mikal Bridges, who stays in the paint to protect the basket instead of following Green to the corner, to do anything about this floater anyway:

Or, to meet Harden’s drive and recover all the way to the corner, from where Green is shooting 44%.

We see each of those possessions came within a 1-2-2 alignment for the Nets, who, in each case, were able to force a switch of DeAndre Ayton onto James Harden. In each play, that basic alignment, featuring two especially sharp shooters on the wings, allows Harden to gather a full head of steam towards the rim before meeting the back-line help. The Beard heading downhill with that much momentum is a raging bull. And Ayton provided about as much resistance as a traffic in that mismatch.

So, you might ask, why are the Suns allowing that mismatch? To generate that switch, the Nets often lean on inverted ball screens, with Green as a more-than-capable handler. Ultimately, the longer you try to have DeAndre Ayton slide his feet 35 feet from the basket, trying to maneuver over screens with a high hedge, bad things are going to happen:

(Man, Jeff Green’s diverse skillset really benefits this Brooklyn team.) All game, the Suns had been willing to give up the switch on James Harden, knowing they were free to basically ignore Brown, and Jordan in some cases. But in the fourth, Steve Nash takes that option away from them by going 5-out. And when Phoenix suddenly needs an alternative, Jeff Green the ball-handler was able to make them pay for the slightest miscue.

As Tuesday night’s game vs. the Suns progressed, Nash and D’Antoni kept opening up the floor for James Harden. They kept expanding his pamphlet of reads. In the pick and roll with two non-shooters, the options are very limited. But it becomes a more dynamic, with the more shooting you add to the floor. And while DeAndre Jordan has provided a crucial lob threat throughout the season, going 5-out has been the final step in dismantling defenses for the fourth quarter Nets in 2021. Every read is open to James Harden, who has the ball in his hands often down the stretch, regardless of Irving and Durant’s statuses. It’s the defense whose options shrink infinitesimally. There’s no easy option to help off of; there’s only hoping James Harden doesn’t come through. And today, yesterday, and tomorrow, that’s almost always a losing bet.

The Brooklyn Nets 4th quarter offense isn’t overpowered because of its complexities. There are no mind-bending schemes Nash and D’Antoni cook up and wait to dish out until crunch time. They do the opposite. Brooklyn eliminates the noise from their offense, and puts the ball in the hands of their unstoppable offensive talent. It’s lethal in its simplicity. It’s silent, deadly, and it just helped the Nets score 40 points in the final frame of one of the best wins of the season.