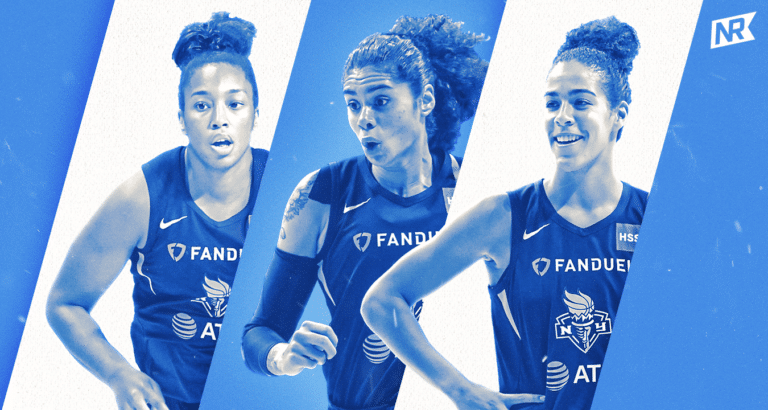 What Kia Nurse, Amanda Zahui B., and Megan Walker Bring To Their New Teams

Change is in the air in Brooklyn as the New York Liberty have brought in a lot of new pieces this offseason. But with addition also comes subtraction, with some key players from last year’s team finding themselves elsewhere now: Kia Nurse and Megan Walker are in Phoenix, while Amanda Zahui B. has signed with the Sparks.

While the three are no longer part of the Liberty’s future, they were a key part of the team’s past. And who better to break down what the trio brings to their new teams than someone who watched a whole lot of the three last season?

So, let’s take a look at how these three will contribute in their new digs.

An All-Star in 2019 for the Liberty, Kia Nurse seemed like a important building block for New York’s future before a disastrous 2020 season suggested that Nurse needed to play a smaller role in order to be the most effective version of herself.

Well, she’ll get to do that in Phoenix, where Diana Taurasi, Skylar Diggins-Smith, and Brittney Griner are going to take a ton of pressure off of Nurse, who will either settle into a role as the fourth option in the starting lineup or as a sparkplug off the Mercury bench.

Whichever situation turns out to be the one Nurse finds herself in, one thing seems pretty certain: her 2021 numbers are going to look a lot better than her 2020 numbers.

During Nurse’s All-Star campaign in 2019, the Liberty weren’t necessarily a good team, but they did have Tina Charles in the paint to command a lot of defensive attention, plus players like Bria Hartley and Rebecca Allen to command attention on the outside.

Nurse averaged 13.7 points per game that season, shooting 39.3 percent from the field and 35.3 percent from three. Her overall efficiency dipped a little from her rookie year, but Nurse–who had a usage rate of 20.8 percent–still looked like a player who was destined to be a strong perimeter scorer in this league.

And then 2020 happened. Nurse’s usage rate jumped to 25.9 percent, a number that ranked 13th in the league. In an ideal world with Sabrina Ionescu healthy, Nurse would have played a secondary role to the dynamic rookie, but Ionescu’s ankle injury meant that didn’t happen.

Instead, Kia Nurse posted some really poor efficiency stats. While she still averaged 12.2 points per game, she shot just 27.3 percent from the field and 23.8 percent from three. Among players who appeared in at least 10 games, Nurse had the fourth-worst field goal percentage.

But again, I think situation had a lot to do with that. Nurse was handling the offense more than she should have been and also seemed hampered at times by an ankle issue.

Back in 2019, Nurse showed some really good upside as a spot-up shooter and a pick-and-roll ball handler. On the latter playtype, her 0.955 points per possession ranked in the 95 percentile among WNBA players. She struggled in transition, but was in the 88th percentile in overall PPP in the half court.

The other piece that arrived in Phoenix was Megan Walker. Walker was the ninth pick in last year’s draft and was fifth in my final mock draft, so you can imagine how excited I was that the Liberty picked her.

Walker never really got going in the bubble. The combination of arriving late after a bout with COVID-19 and also being an early-entrant and coming in with a year less college experience than most other rookies put Walker in a tough spot.

But while Walker’s numbers — 3.3 points and 1.5 rebounds per game on 32.1 percent shooting and 14 percent from three in 11.4 minutes per game — weren’t encouraging, I’m still high on her potential. I pretty firmly believe that if Walker had gone back to UConn, she would be the No. 1 pick in this year’s draft (and would have been the player we lamented losing out on after the Natasha Howard trade.)

In her final year in college, Walker shot 45.1 percent from three on 5.4 attempts per game. She ended up averaging 19.7 points and had a pretty nice Synergy playtype chart, aside from some issues on the pick-and-roll:

There are fair concerns about Walker after a rough rookie season, but her college numbers are simply too good for us to write her off at this point. Phoenix is buying low on an extremely talented player, even if Liberty fans only got to see fleeting glimpses of that talent. Giving up the sixth pick and a 2022 pick for Nurse and Walker is a smart move for this team, even if that 2022 pick could be very valuable if the Mercury struggle this season. Based on this team’s personnel, they shouldn’t really struggle.

What The Sparks Are Getting With Amanda Zahui B.

While Kia Nurse and Megan Walker left via trade, Amanda Zahui B. went to the Los Angeles Sparks in free agency.

The Liberty’s decision to extend Kiah Stokes last season seemed to signal that we should expect Zahui to be on the move, as we knew that the frontcourt was a position of need for this team and that moves would happen. And that was just how things ended up going, with Zahui heading to the Sparks, who had a need for a shooting big after Candace Parker left for the Sky.

Zahui–who I’ve long been a fan of–was the perfect center for what the Liberty want to do, but opt outs and personnel issues meant the team had to play both her and Stokes together a lot. I’m not sure, but I don’t think that was Walt Hopkins’ plan for Zahui B.

She now heads to L.A. where, barring an unexpected trade, she’ll join Nneka Ogwumike in a dynamic frontcourt.

Zahui B. was fourth on the Liberty in points per game last year among full-season players at 9.0 and struggled on her two-point attempts, shooting 36.9 percent on her non-threes. You can see in her shot chart that there were a lot of misses in the space between the three-point line and the restricted area:

But like with Kia Nurse, Zahui B. is going to benefit in Los Angeles by playing on a stronger offensive team. The Sparks should have both Ogwumikes, Erica Wheeler, Brittney Sykes, and Te’a Cooper to take on the offensive load. That should allow Zahui B. to take more unguarded shots. There was a pretty big disparity in Zahui’s catch-and-shoot numbers when comparing guarded vs. unguarded numbers:

With less pressure from the defense, we could see a career year for Zahui B. in L.A. She’s never been afraid to fire away from above the break, and now she’ll be doing so in an offense with more viable options that New York had. Get the Ogwumikes pulling the defense into the paint and let Zahui operate solely as a stretch big on that end? Yes!

Defensively, she gives the Sparks a nice replacement for Candace Parker. Zahui is a smart defender who can use her length to get into a shooter’s face. Her limited possessions as a pick-and-roll defender last season looked exceptional, and while she’s not an ideal post defender, she can get her arms up and block some shots when she needs to. She might not give L.A. DPOY-type contributions like Parker, but was second on this Liberty team in defensive Estimated Contribution last season and while I don’t have access to 2020 Player Impact Plus/Minus numbers because they’re no longer public, I did pull some 2019 PIPM numbers before last season:

Zahui was by far the best defender on that team based on PIPM. She should continue to be a positive contributor in L.A.

The Liberty are going to be an improved team in 2021, but they’re really going to miss the players who’ve left. Kia Nurse would have been great on this team because she would have gone back to a smaller role, allowing her to shoot more efficiently. Amanda Zahui B. would have had another season to show she can the right stretch big for Hopkins. Megan Walker could have shown why draft writers were so high on her. None of those things will happen now, but their new teams will get to enjoy what these players bring to the table.