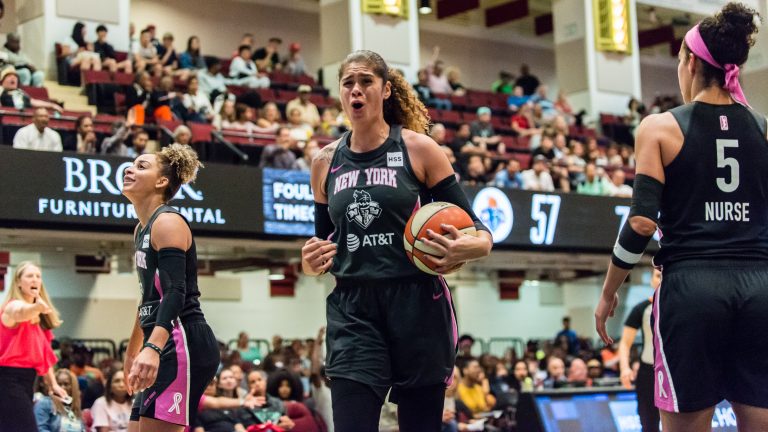 New York Liberty: Was Amanda Zahui B The Team’s Best Player In 2019?

I’ve got a hot take for y’all, and I’m prepared to pull up the stats and the video to prove the hot take.

Here it is: The best player on the 2019 New York Liberty wasn’t former MVP Tina Charles. It wasn’t first-time All-Star Kia Nurse, though Nurse’s second WNBA season did see her make tremendous strides and show that’s she’s going to be one of the league’s top offensive players going forward.

No, based on her play and various advanced metrics, as well as on/off data, the most important player on last year’s New York Liberty team was center Amanda Zahui B.

Don’t believe me? Let’s dive into some things.

The first place I might need to start in my quest to convince you all that Zahui B was the team’s best player is to talk about her raw stats, because for basketball fans who measure things based on box score production, this argument might seem odd. Zahui B didn’t lead the Liberty in points per game; in fact, her 8.6 points per game only ranked fifth on the team. She wasn’t the rebound leader. She only shot 31.9% from three.

She did lead the team in blocks per game with 1.4, though, and she had the highest two-point field goal percentage on the Liberty. Her true shooting percentage was third highest on the team, but the two players ahead of her — Marine Johannes and Nayo Raincock-Ekunwe — both played under 500 minutes.

Zahui B missed time as well, playing in just 24 of a possible 34 games. But despite missing 10 games, she still had the second-most win shares on the team.

This is all admittedly not a very convincing case, but I also don’t think you can solely use things like points per game to evaluate a basketball player. A lot more goes into it, and all those other things are where the case for Zahui B as the team’s 2019 MVP start to really crystalize.

This is where the evidence starts to show that Zahui B really was the most important player on this team last year.

My favorite advanced metric is Player Impact Plus Minus (PIPM), a stat developed by Jacob Goldstein that “combines traditional boxscore value with luck-adjusted on/off player data to estimate how much value a player adds to their team.”

PIPM can help us figure out how valuable a player was on both sides of the floor.

First things first, those aren’t great numbers for anyone on the team. Most of those numbers were in the bottom half of the WNBA, and Zahui B was the only player with a positive D-PIPM, while Kia Nurse was the only one with a positive O-PIPM. There are not a lot of positive ways to slice that.

But Zahui B’s defensive contributions plus the fact that her offensive numbers weren’t astronomically bad helped her to have the best overall PIPM on the team at -0.02.

I don’t want to turn my opinion here into some kind of contest between Zahui B and other players, but what I will say is that Kia Nurse’s big advantage on offense wasn’t as big as Zahui B’s big advantage on the other end. Nurse’s defensive metrics didn’t look good last year, and while you can blame a lot of that on the fact that she was really a two playing the three, I do think it’s worth pointing out that disparity at least once in this piece. But that’s it. Nurse had a good year. I just think that in the games Zahui B played, she had more of a positive impact overall. This is also where win shares come back in. Nurse led the team in win shares, but Zahui B led in win shares per 40 minutes.

As for lineup data, this is a little more complicated. Per Positive Residual, the Liberty had a better net rating with Zahui B on the bench than on the court, but single player net ratings can be pretty fluky. I think we get a better picture of things when we factor in who played with who.

I’m not at all sure that I convinced you that Amanda Zahui B was better than Tina Charles or Kia Nurse last year, and that’s fine. There are an infinite number of ways to understand basketball.

But while I have you hear, let’s go ahead and revisit Zahui B’s best game of 2019.

An underrated part of her game: post ups! Per Synergy, she scored in the 89th percentile on post ups!

If we want to do some projection towards this upcoming season, let’s talk about Zahui B’s pick-and-roll finishing.

Her ability to finish plays as both a roller and a popper is going to be incredibly useful on a team with multiple skilled pick-and-roll ball handlers, including Sabrina Ionescu and Asia Durr. Zahui B is a great big for the style of play this team wants to employ as she can score at multiple levels offensively. I’m very excited for some high pick-and-rolls with Ionescu or for Zahui B to pick-and-pop to the right wing.

Speaking of pick-and-popping to the left wing!

Zahui B really found her spot in this game, making seven threes from the top of the arc or the right side of it, all basically clustered in the same little area.

The threes were definitely clustered, and only two threes all year came from the corner. Zahui B’s got range, but I don’t expect we’ll see her as a pure spot up, catch-and-shoot player; like we saw in the 37-point game, she’ll do a lot of shooting out of pick-and-rolls, and other than that will probably do some posting up.

Also of note last year was that Zahui really bloomed as a shot blocker. She averaged 1.4 blocks per game in 2019; before that, her highest average was 0.7 per game. But in 24 games last year, Zahui B blocked 33 shots, the most in her career despite missing a chunk of the season for EuroBasket and also missing time while injured.

Anyway, the whole concept of who the best player on a team that struggled like New York did is debatable. I could probably argue for Rebecca Allen as the best based on on/off splits if I really wanted to. But the larger point here is this: we aren’t talking enough about how much Amanda Zahui B improved last year. Was she the best player for the Liberty? Maybe! Will she be a vital piece of the the team’s future? Yes.