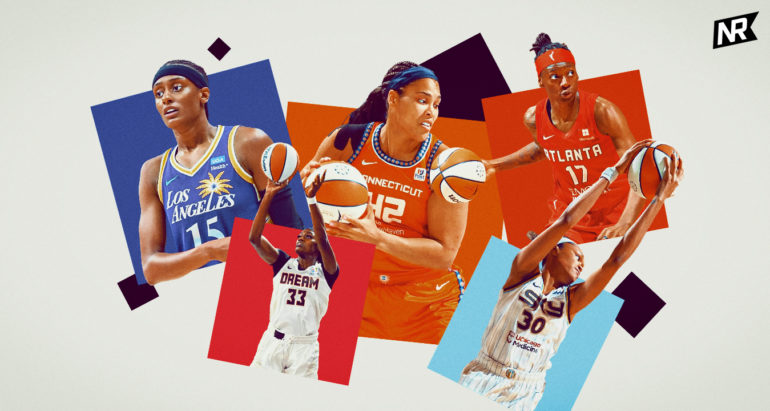 After winning a playoff game in 2022 and hosting another, the Liberty have established themselves as a team on the rise. The franchise has excellent facilities and continually demonstrates it wants to treat its players like superstars. There’s a lot to like about New York as a free agency destination. Plus, Jonquel Jones is now part of the crew!

The Liberty have enjoyed offseason success over the past few years, but it’s time to take the next step. Who is both available and capable of helping the Liberty elevate from their current status as a feel-good, up-and-coming playoff team to a legitimate title contender? That’s what we’re here to answer.

As always, Her Hoop Stats was a tremendous resource in writing this article. You can find a complete list of 2023 free agents here, as well as details on the specifics of the WNBA free agency season. Especially pertinent: players can begin talking to teams on January 15, and officially sign new contracts beginning February 1.

I have chosen to omit Breanna Stewart, Nneka Ogwumike, and Candace Parker from this article. Naturally, Stewart will be New York’s top target this offseason. The potential acquisition of the Seattle Storm superstar would lift the Liberty’s ceiling to that aforementioned “title contender” status, and the New York front office will undoubtedly do everything in its power to lure Stewart east. The team still has the necessary cap space to add Stewart after trading for Jones. But the purpose of this article is to highlight players who aren’t superstars, yet could still help the Liberty improve. The benefits of adding Stewart, or Ogwumike, or Parker are so obvious they need no explanation.

Onward. Here are five players the Liberty should try to sign come February, especially if they are unable to hit the Stewart home run.

Sykes displayed the full breadth of her talents in games against New York this season. Not only was she the Sparks’ defensive stalwart, but her explosiveness in the full court was striking. The Liberty struggled to contain Sykes, whose athleticism stood in stark contrast to New York’s fundamentally sound but athletically limited roster.

Per Her Hoop Stats, Sykes ranked first in the league in steal percentage among players who averaged 10+ minutes and played in at least half of their team’s games. She is the type of defensive menace New York lacked without Betnijah Laney in the lineup, and frankly, adding Sykes would allow Laney to pick up where she left off offensively in 2021.

New York ranked 10th in the WNBA in Pace last season, per WNBA.com. Playing fast doesn’t have a direct correlation to success, but it keeps opposing defenses on their toes, wearing them down for late-game half court sets. Sykes is dynamic in space, and would serve as a lovely sidekick to the more methodical Liberty stars: Sabrina Ionescu and the newly acquired Jonquel Jones.

Let’s preface this by saying this is unlikely to happen following the Jonquel trade. Per ESPN’s Alexa Philippou, the Sun intend to core Brionna Jones, now that the designation has been freed up.

Jones should be priority number one if the Stewart pipe-dream fails. The advanced stats adore Jones’ game. Per Her Hoop Stats, Jones finished second in win shares per 40 minutes this season, trailing only … you guessed it: Stewart. She was sixth in Player Efficiency Rating, despite coming off the bench for Connecticut. Per Basketball Reference, Jones ranked third in offensive rebounding percentage among players with at least 200 minutes under their belt. The Liberty were pedestrian on the glass in 2022, ranking eighth in both rebound percentage and offensive rebound percentage, per WNBA.com. Jones would likely propel New York into the league’s top half on her own.

Jones gobbles up rebounds and is a machine in the paint. She’s the type of interior force that commands defensive reinforcements, which would open up space on the perimeter for Sabrina Ionescu to operate. One could easily imagine the Jones/Jones frontcourt operating in some deadly hi-lo action within Brondello’s system.

Signing Jones would do wonders for New York’s frontcourt depth. It would give Liberty general manager Jonathan Kolb two options: explore the trade market for Stefanie Dolson, or bring Dolson off the bench alongside Han Xu. Having four playable and productive bigs on the roster would allow New York to withstand an injury, should disaster strike.

If somehow made available, there’s no logical reason why New York wouldn’t pursue Jones, other than if it ties up its cap space with a home run signing like Stewart or Ogwumike.

Every team in the league should be doing everything in its power to pry Stevens from the 2021 champions. All of Chicago’s key players not named Kahleah Copper are unrestricted free agents this offseason, and the chance of Sky general manager James Wade returning his 2022 roster is slim-to-none (though he did defy similarly long odds last winter).

Stevens would form a dominant interior defensive duo with Jones. She ranked 11th in block percentage among players who played at least 10 games and averaged at least 10 minutes, per Her Hoop Stats. More importantly, she is fleet of foot and able to switch onto smaller players without being exposed, much like Jonquel Jones. Natasha Howard, Han Xu, and Stefanie Dolson helped New York achieve great defensive success in the paint in 2022. Per WNBA.com, the Liberty allowed the second-lowest opponent field goal percentage in the restricted area, and the lowest opponent field goal percentage in the rest of the paint. Add Stevens to this elixir with Jonquel Jones in place of Howard (both are elite defensive forces) and New York would be downright dominant at the rim, forcing teams into less-than-ideal jump shots.

Stevens is no slouch offensively, either, having averaged 10.6 points and shot over 36 percent from three on 3.3 attempts in 2022. A lineup featuring Ionescu, any shooting guard, Laney, Jones, and Stevens would be nearly unguardable, with all five players capable of striking from deep.

In what may have been the most electric game played at Barclays Center in 2022, Wheeler tore the hearts out of Liberty faithful with an icy buzzer-beating three. A rollicking affair on June 30, New York trailed by 13 early in the fourth quarter before peeling off 17 straight points to take the lead late. Undeterred, Wheeler dribbled out the game’s final seconds before lofting an above-the-break triple that forced overtime. Tiffany Hayes took over in the extra period, leading Atlanta to a 92-81 win.

The shot-making was stunning, but it was Wheeler’s defense on Sabrina Ionescu that stood out. Though Ionescu made her mark in other areas, she was held to 6-of-19 from the field and 1-of-10 from deep. Never able to get comfortable, Ionescu was pestered by Wheeler’s stellar defense for the full length of the court. Wheeler wore her down, to the point where New York simply wilted in the five minute overtime period.

Crystal Dangerfield was a game-changer for the Liberty in 2022, and New York should try to bring her back. That said, the team sacrificed a bit of offense with Dangerfield on the floor—ironic considering offense was her strength and defense her weakness in Minnesota when she took home Rookie of the Year honors in 2020. Now, Dangerfield is known as a lockdown defender, though she moved to Dallas in last week’s trade.

The Liberty could enjoy that same elite defense without sacrificing anything on the other end if they signed Wheeler instead. An added benefit? Ionescu wouldn’t have to worry about playing against Wheeler at least twice in 2023.

This falls into the category of “uber-realistic targets,” because Caldwell wasn’t even on a WNBA roster for a large chunk of the 2022 season. The Georgia graduate didn’t make her mark until late in the season, providing the Atlanta Dream with a much needed scoring boost off the bench. After a three game stint with the Dream in June, Caldwell returned to the roster in August for Atlanta’s final six contests. She scored 10 or more points in five of those six games, including a 17-point outburst on seven-of-nine shooting against the eventual champion Las Vegas Aces on August 9.

You know what the turning point was in the final game of the 2022 regular season between Atlanta and New York? When Atlanta head coach Tanisha Wright—who pushed all the right buttons in her first season with Atlanta—didn’t bring Caldwell back into the contest during crunch time. Caldwell had already logged 14 points in 20 minutes of play, having missed just two shots. Yet Wright chose to ride with her starters rather than favor Caldwell with the Dream season hanging in the balance. Wright was downright excellent in 2022, but this was a rare instance where she swung and missed. Atlanta struggled to score down the stretch, and New York prevailed, clinching a playoff berth and sending the Dream packing.

Caldwell deserves a full season on a WNBA roster. New York would be the perfect home. She is reliable, efficient, and versatile. With more professional experience, Caldwell projects as a strong wing defender. She can hit threes and score while limiting turnovers. These are all qualities the Liberty would love to have on their bench in 2023.

This one doesn’t need a ton of explanation. New York already secured the 2021 MVP in Jones. It could conceivably add the 2018 MVP, Stewart, to the mix. Even if the Liberty aren’t able to swing a Stewart signing, they’ll need role players who can shoot and defend. This is the modern basketball blueprint, after all. Brown may want to stay in Los Angeles after enjoying a wonderful season there in 2022. The 9th overall pick in the 2018 Draft shot a career-high 40 percent from three with the Sparks and was dynamic defensively per usual. But if she wants to switch coasts, New York would be a perfect fit.