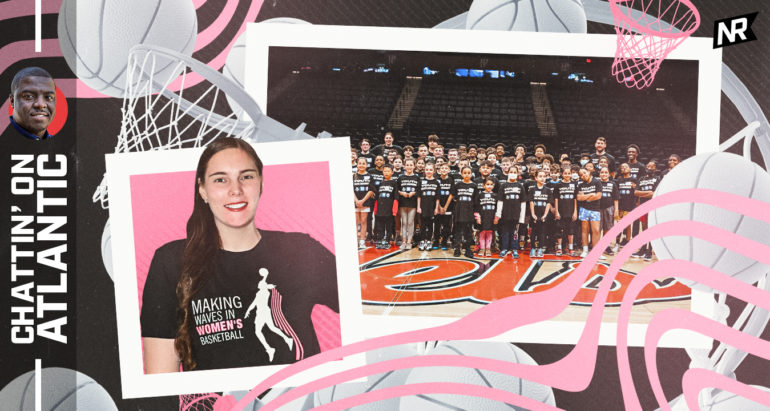 Community. What do you think about when you hear this word? Is it a just a way to describe the people of a neighborhood, or is it more? Does it mean something to you?

That word, community, is special to Coach Kelley Dempsey, the person I’m profiling in the first edition of a new series, “Chattin’ on Atlantic.” She is a head coach at Hicksville high school, a clinician with the Long Island Nets (and formerly with the Barclays’ co-tenants, the New York Liberty and Brooklyn Nets), and the founder of her own company (Making Waves in Women’s Basketball). Above all else, though, she’s a community leader. Let’s take a stroll on Atlantic Avenue and have a conversation with Coach KD.

As we exit the Barclays Center, crossing the street towards Atlantic Center Mall, Coach KD explains where her passion for the sport originated: with her parents. “They were married not long after they met and had their honeymoon in England running basketball camps. They then had me, and you would think I was born into the game. Pictures of me at less than a year old with my dad holding a basketball as we played in the park. I was literally born to love this game.”

Her mom played growing up, but the sport then was very different than the one we’re familiar with today. “She actually played high school basketball when women were not allowed to cross half court. It was kind of like soccer, where you have rovers, then three players on offense and three on defense.”

Her mother’s experience paired well with her father’s. He coached high school and AAU, and one day brought her to practice instead of the dance class she’d had scheduled. For Coach KD, she began to see the game through her father’s perspective. As The coach’s kid, she picked up subtle nuances that others on the court often missed. This basketball IQ came in handy when Coach KD competed against some great players. From Gabrielle Gibson (Assumption University ‘13) to Epiphanny Prince (Seattle Storm) to Bria Hartley (Connecticut Sun), she held her own against top-tier talent, but injuries kept her from pursuing a pro career. “Even though I could continue playing, I wanted to save my knees and got right into coaching. I am a very selfless person, so coaching made it a lot easier from a transition standpoint and it was more rewarding for me to coach other than for me to keep playing for self validation.”

With her coaching background explored, how did she become a clinician on the pro level? Here’s another place where Coach KD bridges her passion with her desire to refill the cup of the people around her. “So, again, community runs this world, and I’m very fortunate to be able to be tight knit in the communities that I’m in and that’s created all my opportunities. I’ve been the Nassau County Police Activity League (PAL) director in Hicksville for the Headquarters Activity Unit for years. My father actually started working with them for all of the basketball operations. He then hired me, so when the Long Island Nets of the NBA G-League started about six years ago, they had a basketball clinic at Nassau Coliseum, and asked my father to come in and help out. They had some people running it, but my father and I jumped in and ran drills on behalf of Nassau County PAL. After the clinic was over, Alton Byrd—who is the Vice President for the organization—gave me his card and said, ‘I absolutely love what you did! Give me a call tomorrow.’ From that point on, it’s history. I’ve been with the organization since, and I’m absolutely grateful for all the opportunities they have given me. It’s also helped me grow personally.”

While Coach KD had so much of her own talent to give, this opportunity helped her to develop skills and overcome some of her own challenges. “I’m not a great public speaker,” she said. “But by doing those basketball clinics, I was able to overcome some of those fears that I had, like being on camera. Basketball has provided those skills and opportunities and that was all thanks to Nassau County PAL, my father, and Alton Byrd. Because of my work with the Long Island Nets, other opportunities opened up for me.”

That led her to the New York Liberty. Coach KD ran clinics for the team, but one from January 2021 stands out for her. Still at the height of the pandemic, Coach KD, alongside her best friend Ashley Jackson, ran the Sabrina Ionescu Virtual Skills and Development Camp, and it was a complete success.

As a result of the camp’s success, Coach KD’s name rang bells within the circles of the Nets organization, and she was ultimately referred to apply for the Head Director position for the Brooklyn Nets’ basketball camp. In addition, Coach KD continued working with the New York Liberty as she successfully completed a joint clinic with the Long Island Nets in December 2022 with Allie Moogan, the Liberty’s Community Coordinator.

All her professional success branches out from her foundational goal, to unify the people around her. “I think community is different things. Community is people helping people. It’s also just familiar faces that you see. It’s building relationships.” Coach KD also expressed that as much as the community has helped her, she is always willing to pay it forward.

She stops walking now, her tone shifting as a memory suddenly clouds the conversation. “This is something sad and I feel bad I even have to mention, but a couple of months ago, I was coaching 5th grade girls’ basketball. I remember tying a young lady’s shoe at practice, and she says, ‘Do you like my new shoes?’ I answered, ‘Yeah, they’re really nice, but why didn’t you get signature sneakers made for women?’ She gave me this perplexed look and said, ‘What are you talking about?’ I respond with, ‘Do you know the WNBA?’ She’s said, ‘No, I’ve never heard of it. My dad only always watches the NBA.’ So now I’m thinking, ‘okay, she’s young,’ but at the same time, she should be aware of the WNBA and those players that have clothing lines and sneakers. So for me, I think as a community, it is our job to bring that awareness about those things, especially being a woman.”

The threads begin to connect, the disparate pieces of Coach KD’s experiences coming together to create the holistic through-line. “Your efforts to help others never stop,” I noted. “Is that how Making Waves in Women’s Basketball came into existence?”

She smiles wide. “I have to begin at where it started,” she says, and she’s being literal, concrete. She points back towards the Barclays Center, a few blocks away from us now. “So, when what become Making Waves in Women’s Basketball started, I actually was working a Brooklyn Nets camp. The premise of the idea came prior to that as I was training some high school basketball players that I’ve worked with for years. I had a player from my high school girls’ team who needed help with college recruitment. They weren’t getting the help at all.

“Then, when I worked the Brooklyn Nets basketball camp that summer, I had a camper who was looking to transfer and a thought just popped into my head. I’ve had these players that I’ve coached and know personally, that aren’t getting help with recruitment, so how can I create something that just connects the player to college coach? So I had a conversation with Dell Bethea, who is the Head Clinician for the Brooklyn Nets, and for some reason, [the phrase] Making Waves was stuck in my head. We broke for lunch, then ran some more drills. After another brief break, I went over to Dell and told him, ‘Making Waves in Women’s Basketball. That’s what I’m calling it.’ I’m like, ‘I’m doing this for real.'” Coach KD created her platform on Instagram before graduating to Twitter, then, ultimately, a full-blown website.

Since its inception, Making Waves in Women’s Basketball has continued to gain traction, as the purpose is to elevate, amplify, and expose the talented girls in high school basketball to potential recruiters. It has garnered close to 4,000 followers on Twitter and close to 2,300 followers on Instagram since its 2021 debut. Coach KD has also built a huge Girls and Women’s Basketball community on Twitter that contains more than 400 members. Her efforts garnered attention from some in the app’s coaching community, like Coach William Payne out of Virginia, whose following on the platform has grown due to his efforts in getting players recruited. “Coach Payne has been willing to help without hesitation,” she says. “He does a great job in spreading meaningful information, and always posts, reposts, or tweets what we have.”

We’re approaching the Barclays Center again, but I can’t let her go without a Liberty question: who does she rank as the franchise’s top five players? “Becky Hammon, Rebecca Lobo, Sabrina Ionescu, Teresa Weatherspoon, and it’ll be between Tina Charles and my personal fave, Jocelyn Willoughby.” She also mentioned OG players like Sue Wicks and Crystal Robinson, but raved about Lindsay Whalen and Long Island legend, Sue Bird.

We parted ways, but as I readied to descend into the Atlantic Avenue subway, she asked me a question. “Shouldn’t the New York Liberty be New York’s team?”

And I’ll give you the same answer I gave her. Why not?