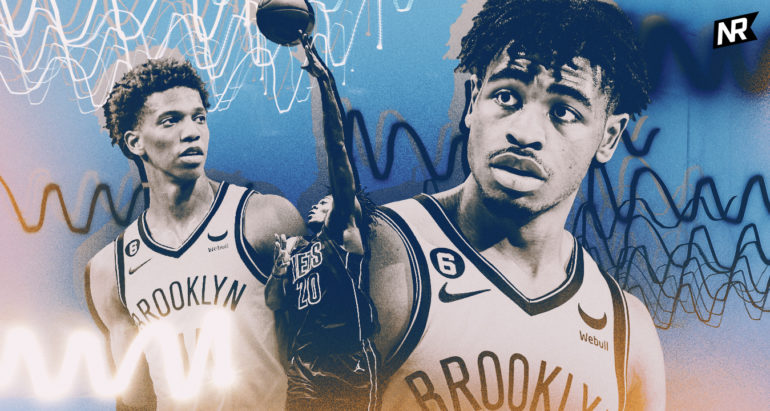 The Nets Young Players Are Stuck in Limbo

After what was a troubling start, the Nets are currently on cloud 9. Since starting 2-5 and firing former head coach Steve Nash, new head coach Jacque Vaughn has led the team on a 25-8 run, and a 27-13 record overall. As expected, Brooklyn is led by their veteran core, spearheaded by the “Big 3” in Kevin Durant, Kyrie Irving, and Ben Simmons. Rounding out the rotation includes fellow key vets Nic Claxton, Royce O’Neale, TJ Warren, Yuta Watanabe, Seth Curry, Joe Harris, and Edmond Sumner. Their excellent play on both ends of the floor has been key firestarters in the Nets’ dominant play as of late, and the development of their identity as a championship contender.

But what about the young players? During this past summer, the Nets only added 1 rookie onto the main roster, point guard Alondes Williams from Wake Forest on a two-way contract. Fellow rookies Donovan Williams from UNLV and Noah Kirkwood of Harvard are currently with the Long Island Nets. The sophomores in Cam Thomas, Day’Ron Sharpe, Kessler Edwards, and David Duke Jr. remain on the main Nets roster, with DDJ on a two-way contract.

After impressive Summer League play from the young players, it was thought that the young guns of Brooklyn would be finding key roles to play during the season. Reality is often disappointing, as the kids have found trouble finding the court this season. Outside of garbage time or spot minutes, the playing time for the sophomores has been non-existent. The only real action came in the infamous load-management game versus the Indiana Pacers, where the sophomores, Alondes Williams, and other end-of-bench players took the court while the team rested the main core.

With the lack of minutes, what does it mean for young players, as well as their future in Brooklyn? Let’s take a dive and analyze the situation

Probably the most electrifying player of the young guns, but also the most contentious. The former Summer League MVP had several iconic moments in his rookie year, and after a summer improvement, it looked like he would be a key part of the Nets. However, that is not the case. Currently, he’s appeared in 27 of Brooklyn’s games, averaging 14 minutes a game, though that number has been inflated. The lack of playing time early in the season led to a temporary moment where he put on his social media “#FreeCT”. He’s averaging 6.4 points per game, 1.3 rebounds, and 1.4 assists on 38.7/41.3/78.3 shooting splits.

Thomas has been a sort of an enigma. Nets fans have seen the improvement over the summer in terms of his passing and playmaking, but in season, his decision-making and tunnel vision has resurfaced. His inefficient shot selection has been predominant, and he has struggled in his finishing at the rim.

Many thought that Cam Thomas can be to the Nets similar to what Jordan Poole is to the Golden State Warriors, a sparkplug scorer off the bench. While that has not truly surfaced yet, the potential is still there. This was shown during the infamous load management Pacers game. A game where Thomas was integral to the comeback victory for Brooklyn.

Thomas showed how good he could be as he continued his development. In a scoring flurry, especially in the fourth quarter, Thomas finished with 33 points. What the rest of the season holds in store is unknown, as there currently is no spot for him on the court with the other talent Brooklyn has.

Sharpe’s potential development seemed it would mirror his fellow 2021 1st-round draft pick, Cam Thomas. Showing he can be a big body in the paint that can rebound and roll to the rim, Sharpe looked like he could be the backup center the Nets need. However, from the start of the season, Sharpe has struggled. Sure the rebounding was there, but he was getting played off the court in switching scenarios and wasn’t able to convert at the rim efficiently. Because of this, Sharpe was demoted to the end of the bench and spent time in the G-League. In 20 games of play, Sharpe has averaged 3.9 points, 3.2 rebounds, and 0.7 assists per game. With Long Island, Sharpe has averaged 18.3 points, 12.7 rebounds, 2.7 assists per game in Showcase Cup play, and averaged 12.0 points, 11.0 rebounds, and 2.6 assists in regular season play.

Just like Cam Thomas, Sharpe’s biggest moment this season also came against the Indiana Pacers. Sharpe was the 2nd punch in the comeback victory over the Pacers. in 32 minutes, Sharpe dropped 20 points, grabbed 12 rebounds, and two blocks. On top of that, Sharpe had a mean poster.

Sharpe’s place on the rotation, let alone the roster is also currently held in ambiguity. Since his demotion, the Nets have been using Durant and Simmons, as backup small ball centers. The development and potential of Sharpe is showing, but is it enough to crack a spot in the rotation of a championship-level team?

Kessler Edwards has been the most peculiar case out of the sophomores. Edwards a 2nd round pick out of Pepperdine, was seen as a potential 3-and-D player for Brooklyn. During the final stretch of his rookie season, it looked like Edwards would be a regular player in the rotation. However, in the playoff series sweep, Edwards was deemed unplayable. Despite this setback, Edwards received a new contract with Brooklyn. In Summer League, Edwards showed the potential as that wing player that fits the Nets model.

However, during the season, Edwards has also found no time on the court for Brooklyn. Rather, Edwards has spent more time on Long Island than in Brooklyn. For a player taking a guaranteed roster spot, this also is not ideal. Edwards’s time in Brooklyn has been limited to garbage time minutes, with extensive play coming also against the Pacers. In that game, Edwards finished with 6 points and 9 rebounds but shot poorly from the field. In 13 games with the main team, he has averaged 1.2 points, 1.1 rebounds, and 0.2 assists per game.

Overall, Edwards is a mixed bag. With most of his time in the G-League, one could say his roster spot is being wasted. But, it is also important to understand that ever since Edwards was picked, he was seen as a long-term development project for the Nets. It is only up to the coaching staff and front office of the Nets how much they want to value the long-term development in their pursuit of a championship.

David Duke Jr. by all accounts has been showing his worth as a player who deserves a roster spot, even if he is also a developmental project. In his rookie year, DDJ has had numerous highlight reels and moments. DDJ continued his highlight-worthy play in the summer, in the hopes that he would receive a guaranteed contract. However, that never came to fruition as, despite the improved play, DDJ settled for another two-way contract.

Most of Duke Jr.’s minutes with Brooklyn have been garbage time or spot minutes as well. With his extended run versus the Pacers, DDJ scored 7 points and added 3 rebounds, 3 assists, and 1 steal. In 14 games with Brooklyn, DDJ has averaged 3 points, 1.1 rebounds, 0.9 assists per game.

However, the Providence product has done most of his damage in the G-League. His play with Long Island has continued to show his potential as a lengthy, athletic guard with excellent finishing skills and excellent defense. However, his shooting from deep still has left more to be desired. Regardless, his numbers look great, as in showcase cup play DDJ averaged 21.6 points, 6 rebounds, 2.3 assists, and 1.4 steals per game. His shooting splits were 44.6%/24%/95.8%. In regular season play, Duke Jr. has averaged 22 points, 7 rebounds, 4.4 assists, and 1.9 steals, with shooting splits of 50%/43.2%/81.8%. This includes a career night versus Raptors 905.

As a two-way player, DDJ has been showing improvement as a defensive slashing point guard and also has shown improvement in shooting. Despite the improved play, it still seems unlikely that DDJ will see much time with Brooklyn as they pursue a title. If Duke Jr. wants to be a major player for Brooklyn moving forward, it might have to wait until next season.

Also drafted in the second round last year is Raiquan Gray. Unlike his fellow sophomores, the product out of Florida State has been stuck in Long Island. Though he has seen improvements in his game, especially his three-point shooting and facilitating out the post, there isn’t much to justify a spot with the main team in Brooklyn.

With the Nets rookie class, there isn’t much to write home about in regard to their time with Brooklyn. Alondes Williams, who was undrafted, is on a two-way contract but has only appeared in one game with Brooklyn. Williams has spent all his time with Long Island. Fellow undrafted players Donovan Williams from UNLV, and Noah Kirkwood from Harvard are only on contract with Long Island. Still, they are doing some work and could factor into Brooklyn’s long-term plans moving forward.

As aforementioned, Williams takes up the other two-way contract for the Nets. Known for his passing vision and ability, Williams put that on display in Las Vegas during Summer League. His lone NBA appearance was in the game against the Pacers. Though he only logged 5 minutes, he was able to secure his 1st NBA rebound.

Alondes Williams is going to be a long-term project for Brooklyn, but the potential is there for him to be a lengthy, athletic facilitating guard moving forward. Brooklyn must also hope his shooting from deep improves to a consistent, solid level.

When Kirkwood was picked up by the Nets Summer League team, he was seen as a big, lengthy, 3-and-D guard. So it comes as no surprise that the Nets front office kept him on the Long Island Nets as a long-term development project.

Last but not least is Donovan Williams, who is another lengthy, athletic guard, with crazy bounce. Another long-term project for the Nets, Williams can become an athletic wing presence for Brooklyn.

For the young players of the Brooklyn Nets organization, no one truly knows what’s next other than the staff in the HSS Center. These players’ careers are essentially stuck in a swamp of uncertainty. With Brooklyn in a prime position to contend for an NBA championship, there is not much room for the young players to be in the rotation. When given the opportunity, the young players seem out of place. At this moment, it seems that Nets fans have to hope they can continuously develop and try to crack the rotation later in the season, which is unlikely or wait until next season. The other option for these players is possibly seeing them in trade packages for veteran role players to help Brooklyn win a championship.

Regardless, all options are on the table, and the future is cloudy. All that Nets fans, and maybe players in the organization, can do, is wait and see for the next opportunity. They are essentially, in limbo.