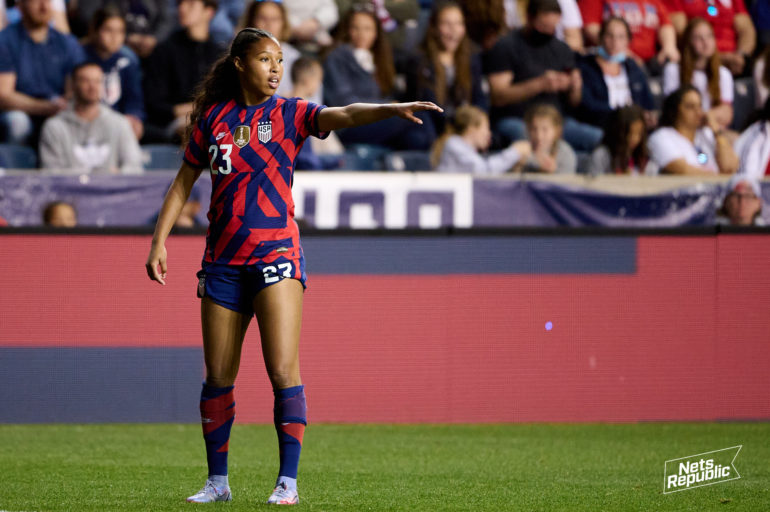 It was a night of firsts on Tuesday in Chester, Pennsylvania as the U.S. Women’s National Team routed Uzbekistan for the second time in four days.

Goalkeeper Aubrey Kingsbury and defender Naomi Girma earned their first starts and caps with the USWNT. Rose Lavelle was named captain for the first time in her career, and Trinity Rodman scored her first goal for the stars and stripes.

Gotham FC’s Margaret Purce earned her 14th cap and scored her 3rd goal off a Kristie Mewis free-kick that bounced around in the box until Purce tapped it into the back of the net. Mewis came on at the half for Lavelle while Purce came on in the 68th minute for Sophia Smith.

The US started the game on the front foot and found themselves ahead after 30 seconds when a Lavelle cross turned into an own goal. Throughout the half, the goals came fast and were plentiful with Macario and Lavelle scoring a brace each as well as a goal from Mallory Pugh. Arguably the best goal of the night was Macario’s first which came on a free-kick just outside the box when she sent the ball the wall off the far post and into the back of the net.

The second half saw a slew of changes on both sides with Uzbekistan sitting in a low block which served to stifle some of the US’ attacking power. Trinity Rodman opened the scoring in the second half in the 71st minute with what would be her first USWNT goal. Purce and Ashley Sanchez would complete the tally with the 8th and 9th goals.

Following the match, Purce spoke exclusively with Nets Republic about her experience at camp.

“I think the focus of this camp was playing against a low block and working on our movements and building relationships,” Purce explained. “We grew a lot in understanding each other’s movements and also making sure that we’re just being creative and making something happen, even when there’s not a lot of space in behind.”

Purce spoke about her on-field connection with Kristie Mewis which contributed to her goal on the night. “I adore playing with Kirstie, I’m just waiting for it to come off a little more. [Gotham FC] is in the building stages this year. It’s great – Scott Parkinson has been fantastic. I’m excited for it to get up and running this year.”

Purce and Mewis will be back on the field with Gotham FC this weekend at home for the Challenge Cup Easter Day match-up against budding rivals and reigning NWSL champions Washington Spirit.

The game will be available to stream on Paramount+ with kickoff at 3PM ET.