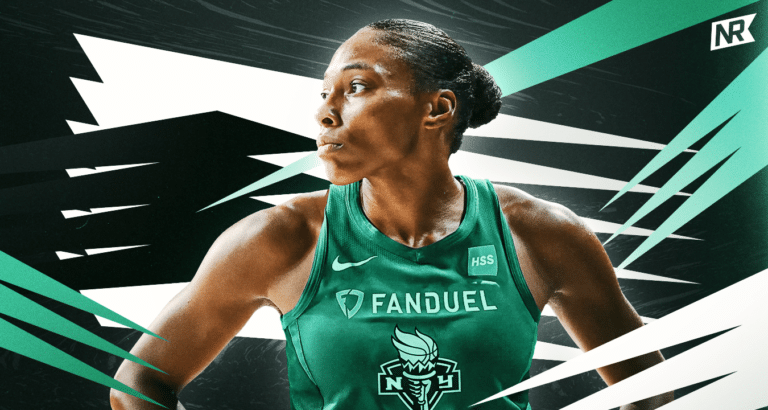 If things go well, Betnijah Laney will be starring at Barclays Center in front of thousands of fans this summer. She signed a three-year contract with the New York Liberty worth over $588,801 last week. Betnijah’s younger self would have never believed this story. For starters, she didn’t want to play basketball.

“Coming up, I hated basketball. I didn’t want anything to do with it,” said Laney over Zoom in her introductory press conference. “The only reason I got into it was because I was always around my mother. She played basketball and she’s always giving back to the community and teaching. So I would have to go to the gym with her. I would just sit in the corner and read a book or do a puzzle.”

Obviously, Laney’s hate for the game turned into love. She eventually got bored of sitting on the sidelines when her mother, former All-American Yolanda Laney, coached. So, she picked up the ball and started playing. As it turns out, Betnijah actually enjoyed the game and quickly showed potential on the hardwood. With her mother working as an attorney for the City of Atlantic City and coaching in the area, Betnijah became a high school star in Delaware. As a sophomore, she even broke the state’s single-game scoring record set by someone named Elena Delle Donne. Laney went to a New York Liberty game, which may have planted the seed for her signing with the Libs.

There are even more ties for Betnijah Laney in New York. She played her college ball just outside of New York City at Rutgers for C. Vivian Stringer, who also coached Yolanda at Cheyney State. Betnijah also has a lot of family in the region, including her great aunt whom she considers a grandmother in Brooklyn. She hopes (along with the rest of us) that fans will be allowed into arenas this year, so that her family can come watch her play.

“It’s kind of like a homecoming for me,” said Laney.

Beyond the homecoming aspect, Laney had a lot of reasons for signing with the Liberty. She got her maximum salary from New York, as I reported last week. But Laney had multiple max offers on the table. She pointed to the opportunity to play with New York’s young core as the most exciting part of the move. She said that she spoke to Sabrina Ionescu before signing, and raved about their potential together.

“I’m really looking forward to playing with [Sabrina],” explained Laney. “Even where she’s at right now, coming into the WNBA last year as a rookie, I think she showed a lot of potential and I think her ceiling is very, very high. So I’m really excited to be able to play with her, [to] teach her but also learn from her.”

At age 27, Laney is still young enough to match the team’s timeline while also providing veteran leadership going forward. NY General Manager Jonathan Kolb revealed that the team wanted Laney last year for her leadership qualities, but couldn’t make it work after Indiana cut her. He also spoke about how important she will be to the Liberty’s culture.

“We’re trying to assemble a group of players that are wanting to be in the gym, and wanting to work on their games, and not only want to work on their games for themselves, but for each other. And that’s who [Betnijah] is, she leads by example,” said Kolb. “It’s just contagious, and we’re looking for that type of attitude. And that’s what she embodies.”

Laney pointed to the Liberty’s ownership group and the abundant resources that the franchise has as key off-court considerations. Joseph Tsai is investing in the Liberty and the investment is seemingly helping the team bring in talent. Playing in the biggest city in the world also seems to have helped the Liberty snag Laney, and they hope the off-court opportunities in New York will help them with future free agents.

“Keia Clark, who’s our CEO, does just a wonderful job planning out off-court programming for players and what they’re interested in how it can really help people and community. I think Betnijah really lit up during a conversation with Keia as well. Just kind of explaining like, this is what you can do off-court in New York,” explained Kolb.

Signing Betnijah Laney is a gamble for New York. She only has one year of high-end production, and it’s not clear exactly how well she can replicate her success from the Wubble. She may not push the team into the playoffs on her own.

However, getting Laney is nothing short of a massive victory for the Liberty. She was one of the best free agents on the market and fits perfectly into the team’s plans and culture. The move also shows that players are responding well to what Kolb and Walt Hopkins are building. Players want to play with Sabrina Ionescu, Jocelyn Willoughby and the team’s budding young core. They want access to the off-court opportunities in New York City. In short, the signing of Betnijah Laney shows that players are buying what the Liberty are selling and that is huge for this franchise’s future.