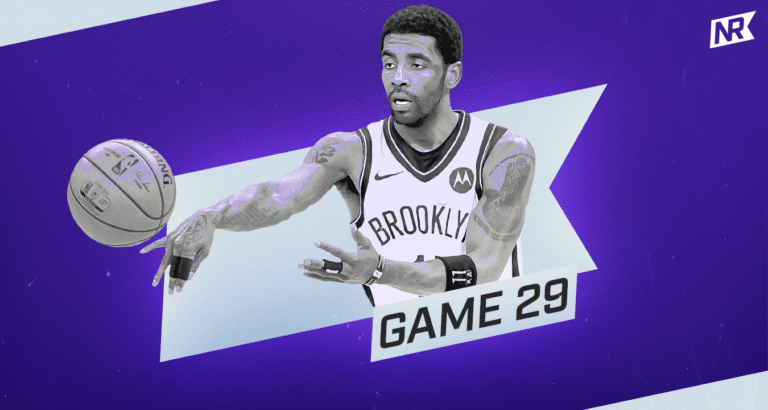 Three Takeaways From the Brooklyn Nets’ Victory Over the Sacramento Kings

The Brooklyn Nets would have had plenty of excuses if they had lost to the Sacramento Kings on Monday night. Kevin Durant was ruled out on Sunday due to a hamstring strain, and the Nets have struggled with playing down to their competition all season. The Kings, fresh off of three straight losses and two particularly brutal ones, were primed for a comeback game.

Instead, Kyrie Irving started off hot and never cooled down, and the game turned into a blowout in the third quarter. The Nets ended up with a 136-125 victory, and are 2-0 on their current West Coast road trip. Brooklyn plays another game tomorrow night against the fourth-seeded Phoenix Suns, which should be a tougher contest. Here are three takeaways from the Brooklyn Nets’ win on Monday night.

The Brooklyn Nets didn’t have Kevin Durant for this game, but they certainly had Kyrie Irving. Irving started the game strong with two straight triples, and didn’t let up the entire night. He scored a season-high 40 points on just 22 shots, including a preposterous 9-of-11 night from beyond the arc. There just isn’t any way to stop Kyrie when he’s starting off games like this:

Irving recently stated that he thinks of James Harden as the point guard, and himself as the shooting guard. The arrangement works pretty perfectly on both ends of the floor: Harden has the bulk to take on the bigger guard on defense, and his passing acumen allows Kyrie to hunt shots and mismatches without having to manage the offense. That worked well for both players in this game, but Kyrie’s outstanding shooting was really the story of this game for the Brooklyn Nets.

For those with a complete lack of long-term memory: assuming that his averages hold, this season would the second time that James “he totally never passed in Houston!” Harden would lead the NBA in assists per game. Harden is currently over 11 assists per game, and added to that total with 14 dimes tonight. He added 29 points and 13 rebounds to that tally to finish off the triple-double.

Harden also went 6-10 from beyond the arc; he and Kyrie made three more triples than the Kings’ entire roster. He also played really well in more bench-heavy lineups. Three of the four bench players for the night ended up scoring in double figures and TLC was right behind them with eight points; a lot of the credit for the team’s offensive flow tonight with their bench units should go to James Harden.

Editor’s Note: For more on the center position, check out recent pieces from Justin Thomas and Lucas Kaplan.

With Kevin Durant out, Steve Nash inserted Jeff Green into the starting lineup at center. That seemed like a pretty safe move given their opponent–after all, the Kings were without starting center Richaun Holmes. This was, in theory, a good time to go small.

That did…not go according to plan. The Kings scored 18 of their first 23 points in the paint, and put up a whopping 68 total points in the paint. Brooklyn more than made up for it with 81 points from behind the arc, but the interior defense has been a concern since the start of the season and it isn’t exactly going in the right direction. DeAndre Jordan did help to stabilize the Brooklyn Nets paint defense when he subbed in for Green. That being said, 2021 Hassan Whiteside should not be putting up 26-16-5 on any team–even if a chunk of that production came after the game was already decided.