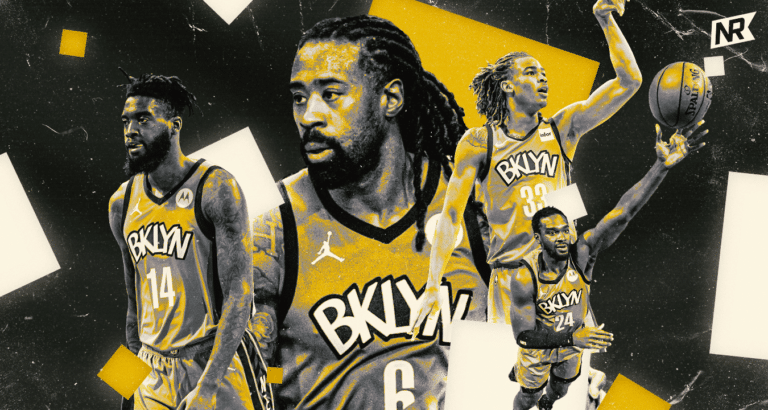 Sorting Out The Brooklyn Nets New Influx of Big Men

Much has been made about the Brooklyn Nets’ lack of front-court depth especially after the James Harden trade which sent fan favorite Jarrett Allen to the Cleveland Cavaliers. Since then the lack of depth has shown in an ugly way as the team has struggled to juggle having only one true center on the roster. With rookie Reggie Perry jettisoned on a two-way with the G-League affiliate, GM Sean Marks has made some additions to Brooklyn’s depleted frontcourt by signing Norvel Pelle and Noah Vonleh. This article will breakdown the new-look Nets’ frontcourt and what we can expect.

Sean Marks’ most recent acquisition, Noah Vonleh will indeed provide some much-needed relief to a Nets’ frontcourt that is running on fumes. Having played on six teams already in his career it may come as a surprise that Vonleh is only 25 years old. At only 5.0 ppg and 5.2 rpg Vonleh’s stats fit the mold of your prototypical journeyman backup center. Standing at 6’10 and weighing in around 257 lbs, what Vonleh gives you is some size upfront with some versatility. Unlike DeAndre Jordan, Vonleh isn’t anchored to the paint on defense. He moves very well for a player of his size and doesn’t back down from challenges.

As my fellow Nets Republic writer Jac Manuell describes in his tweet, this type of ability on defense would be a welcome sight in Brooklyn.

Offensively there aren’t many bells and whistles with his game. Vonleh will get most of his points on put-backs and the occasional bully ball. He does have the ability to hit from deep as well. This isn’t to say he’ll be relied on for the deep ball as he has averaged less than one attempt from behind the line for his career. However, don’t be surprised to see him shoot it if he finds himself open from the corner or top of the key. In the video below from his time with Chicago in 2018, you can see Vonleh display some of that shooting ability.

Depending on his play, Vonleh has a chance to stick around with Brooklyn for the remainder of the season. Brooklyn will most likely be a player in the buyout market however, if they strikeout there, Vonleh could potentially provide some much-needed size come playoff time.

A flyer of a signing, the Brooklyn Nets brought in Pelle last week however it took a little bit of time to clear COVID protocols before he could suit up. Pelle’s first game in uniform went pretty much as expected. The rust factor was apparent especially on the defensive side where he fouled out in only 17 minutes of game action against the Sixers. His energy however was definitely apparent as he also collected three blocks and five rebounds. This is the crux of what Pelle brings as a player. A long, ambitious shot-blocker who will battle on the boards.

Unfortunately, the Pelle signing seems more so like a stop-gap signing as Brooklyn waits for Nic Claxton to get healthy. With Vonleh, a more established player now entering the fold, Pelle’s days with Brooklyn could be numbered. Especially considering the Nets have to make a decision on Pelle, Vonleh, and recently signed Iman Shumpert by Feb 24. It’s a possibility Pelle’s role will be relegated to just bench depth and may only see the floor during garbage time

The bane of many in Brooklyn Nets Twitter’s existence, DeAndre Jordan is now the Nets starting center for the foreseeable future with the departure of Jarrett Allen. At this point, there really isn’t much to say about Jordan. He’ll start the games but more often than not won’t finish the game as Nash usually goes with Jeff Green as a small-ball 5 to close the game. The biggest gripe against Jordan, which has been a thing since last season is his effort, is primarily on the defensive end. There are many times where Jordan allows an opposing player to outwork him or just doesn’t rotate quickly enough on a defensive rotation. As mentioned earlier Jordan is also an anchor in the paint and struggles to guard more mobile centers, especially when they fade out to the perimeter.

It’s not all doom and gloom with DeAndre however. He does provide some positive things on the offensive side of the ball. Over the last few games, Jordan has been great in the pick and roll, especially with James Harden. And when he has a clear path to the hoop lookout. Jordan is good for at least one rim-rattling dunk a game. An underrated aspect of Jordan’s game is also his passing ability in the half-court. Jordan has connected with teammates, specifically Joe Harris on numerous occasions when they cut back door. This in part is due to DeAndre reading defenders who are keying in on Brooklyn’s shooters and overplaying them, thus offering the opportunity for a backdoor dime.

Jordan will have to be an important factor if the Nets have any hopes of claiming a championship. The key for Jordan is consistency and each game will beg the question “which Deandre Jordan will show up tonight?”

I’d be remiss if I did not include Nic Claxton in this breakdown. Although Claxton has not played a game for Brooklyn yet this season due to right knee tendinopathy he still figures to play a role in the Brooklyn Nets’ season whenever he returns. In a recent update head coach Steve Nash said Claxton was still at least three weeks away which means Nets fans may not see the youngster until after the All-Star break. However, there is much anticipation from both the organization and fans alike.

In limited playing time, last season Claxton showed he can be the versatile asset the Nets need. At 6’11 he’s athletic enough to run the floor on the break and dunk in traffic. He also possesses the ability to hit the occasional three and isn’t afraid to challenge shots at the rim. It’s unfair to expect him to burst out the gates when he does return to the lineup but when he does get his legs under him he’ll be an important asset for Brooklyn on both ends of the floor.

This Brooklyn Nets roster is by no means complete. As mentioned before the Nets are expected to be players during buyout season. There’s also no telling what tricks Sean Marks has up his sleeve for when the trade deadline rolls around. One thing for certain is Brooklyn has appeared to fix its short term big man problem. Who’s manning the frontcourt come playoff time is yet to be determined