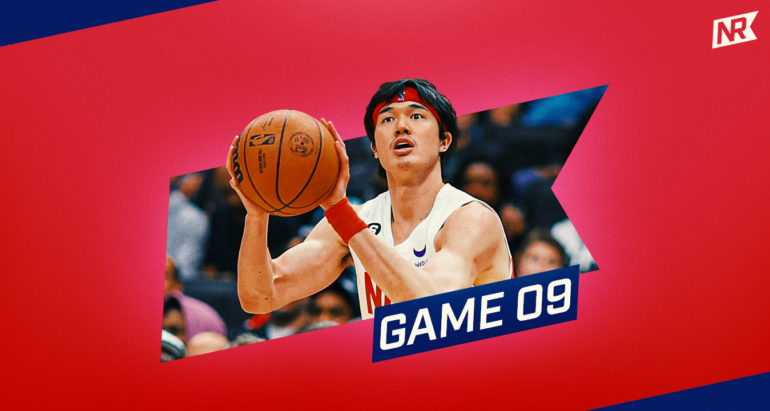 It has been a whirlwind week for the Brooklyn Nets, to say the least. Kyrie Irving was suspended by the team for tweeting a link to an antisemitic film. Ben Simmons is dealing with a left knee injury, meaning he was inactive for Friday night’s matchup against the Washington Wizards. Despite the chaos surrounding the organization, Brooklyn put on a show to get back in the win column.

Due to Simmons and Irving both being inactive, Edmond Sumner and Joe Harris were inserted into the starting lineup. As the game got underway, both groups played with a fast pace, pushing the ball in transition. Royce O’Neale scored seven early points, but the rest of the Nets struggled, and they fell behind quickly.

However, as the quarter progressed, things fell into place. The rotation was solid to start as Cam Thomas, Yuta Watanabe, Nic Claxton, and others all saw valuable minutes on the floor. Kevin Durant found a rhythm, dominating the court on both ends. To finish out the period, he put Daniel Gafford on the floor as Brooklyn took a 10 point lead into the second quarter.

David Duke Jr. proved to be a spark off the bench, creating contact and finishing at the rim. Brooklyn’s momentum rode high throughout much of the second period, as Durant and the role players settled into a consistent game plan. Towards the end of the quarter, Bradley Beal and the Wizards made a push. With two minutes left in the half, the Nets only led 58-57. Thankfully, Durant’s playmaking came through down the stretch. The ball movement was on point, finding the open man with ease. Brooklyn went on an 11-0 run to close out the quarter, holding a 69-57 advantage heading into halftime.

It was a mesmerizing start to the second half for Brooklyn. Once again, the ball hopped with incredible anticipation, allowing the Nets to cash in on plenty of open looks. As a facilitator, Durant was elite. Interestingly enough, he seems to be at his best when surrounded by role players who play within their game. Washington threw loads of double teams at Kevin throughout the night, but his quick decision made the Wizards regret that plan. Thomas and Sumner both played outstanding basketball, sparking multiple runs that expanded Brooklyn’s lead. With 12 minutes left to play, the Nets led 96-70.

Surprisingly, Brooklyn kept their foot on the gas pedal. Defensively, they played at an elite level. Watanabe, Claxton, Durant, etc. put in the work on that end of the floor, keeping Washington in a funk throughout the entire second half. Before the Wizards could figure out what was going on, Brooklyn was up by 40 points. Every single possession was excellent, propelling the Nets to their best game of the young season so far. Brooklyn ultimately won 128-86, putting on a show in the DMV.

– Kevin Durant clearly came out with a purpose in Washington. It didn’t matter who was inactive, who was injured, or who was suspended—Brooklyn was winning this game. The slim reaper finished the game with 28 points, nine rebounds, and 11 assists; dicing up the Wizards time and time again. When KD is locked in, there’s not much anyone can do to stop him.

– Cam Thomas made the most of his opportunity. After only playing 15 minutes heading into Friday night’s action, Thomas was phenomenal. He put up 17 points, six assists, and four rebounds—all while being a +36 during his time on the floor. Cam is a bucket, and should see more playing time in the near future.

– Nic Claxton continues to shine. He scored 18 points on 90 percent from the field, dominating the paint. Add nine rebounds and three blocks to the resume, and you’re looking at a starting center that can make a major impact on a Championship team. His development so far has been key to Brooklyn’s success.

– Yuta Watanabe has been a revelation. The energy, aggressiveness, and confidence he brings off the bench is unmatched. The Wizards had no answers for Yuta, as he compiled 14 points while shooting 75 percent; and, grabbed eight boards. As the season progresses, Watanabe has earned his minutes as a crucial role player for this unit.

– Both of the Nets’ spunky guards stepped up. Edmond Sumner and David Duke Jr. flashed their athleticism and decision making throughout the game. Duke, in particular, attacked the rim repeatedly, finding ways to finish among the trees in the paint. As the team awaits Kyrie’s return, expect Duke and Sumner to make a major impact along the way.

Generally speaking, this was one of Brooklyn’s best wins in a long time. Complete team basketball was played from start to finish. Durant led the way, but simultaneously relied on his teammates to come through—and come through they did. With Charlotte coming right up on a back-to-back, Brooklyn will need to maintain this same energy if they want to win two in a row.