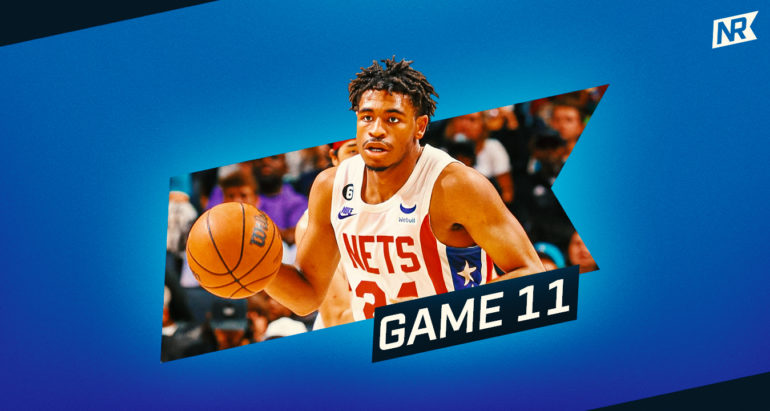 Despite the chaotic atmosphere surrounding the Nets, the team had found a bit of a groove heading into Monday night. After victories over Washington and Charlotte, the Nets turned their focus to Luka Dončić and the Mavericks. Ben Simmons made his return to the lineup, previously missing four games due to a left knee injury, but Brooklyn could not find enough firepower to get past Dallas.

As the game got underway, Nic Claxton made an impact immediately. His rebounding was crucial to the Nets getting some early second-chance points, which gave them an advantage during the first few minutes. Dallas struggled offensively as Brooklyn’s defensive efforts were stellar.

After a sluggish start from the field, the Nets began to cash in on their open looks. Joe Harris, in particular, was aggressive in the first quarter–scoring seven points and driving to the rim with success. With four minutes left in the period, the Nets led 25-11.

As the quarter progressed, Brooklyn sputtered defensively. Dončić and Tim Hardaway Jr. got into a groove, which pulled the Mavericks within five heading into the next period.

That trend continued in the second quarter. Dallas was scoring with ease, making the right plays at the right time. Meanwhile, the Nets struggled to generate offense without Kevin Durant on the floor. Simmons did create some open looks for teammates, but the Nets could not buy themselves a bucket in the second quarter, scoring just nine points in the first nine minutes.

Basketball is a game of momentum, and the Nets clearly lost their rhythm on both ends of the floor. The Mavericks controlled the majority of possessions down the stretch, ultimately heading into halftime with a 53-50 lead.

Things looked smoother for the Nets to open up the third quarter. Durant took control of Brooklyn’s offense, making plays and scoring at-will. It was a back-and-forth affair in the early goings of the second half.

Cam Thomas, to little surprise, was phenomenal off the bench. He provided a spark for Brooklyn, scoring in a variety of ways to keep the Nets engaged offensively. Despite the chaotic moments, the Nets’ scrappy play style allowed them to keep things close. With 12 minutes left to play, Brooklyn led 73-72 in a low-scoring affair.

Simmons continues to be a liability when he is on the court. It takes time to readjust to the game, especially after being out four games straight with an injury, but he still picked up a few inexcusable fouls that hurt the Nets. Simmons also struggled to box defenders out for rebounds and still looks like he’s missing a step or two offensively. Dallas regained a 79-78 lead as Brooklyn looked quite messy across the board.

The closing sequence to the game was wild, to say the least. Brooklyn went down by 10 points with under three minutes to play, and things looked bleak. However, a few excellent defensive stands, followed by two made buckets, made it a four-point affair. Brooklyn had a few empty possessions but kept the foot on the gas pedal. Thomas made a ridiculous three-pointer to pull Brooklyn within one with under a minute to play, giving the team hope down the stretch.

Despite those efforts, the game ended in heartbreak for the Nets. With Dallas up three with six seconds left, Durant was fouled while shooting a three-point attempt. Durant had made 62 consecutive free throws prior, but missed a crucial one that altered the game entirely. He purposely shanked the final attempt–and, Royce O’Neale grabbed the board, but had it stolen as time expired. Brooklyn fell to Dallas for the second time this season, 96-94.

Overall, the Nets showed a lot of heart. Some strides forward have been made, especially on the defensive end. Durant did an effective job slowing down Dončić in the fourth, playing him well defensively. It was a continuation of recent momentum that Brooklyn hopes will turn into wins at a quicker pace.