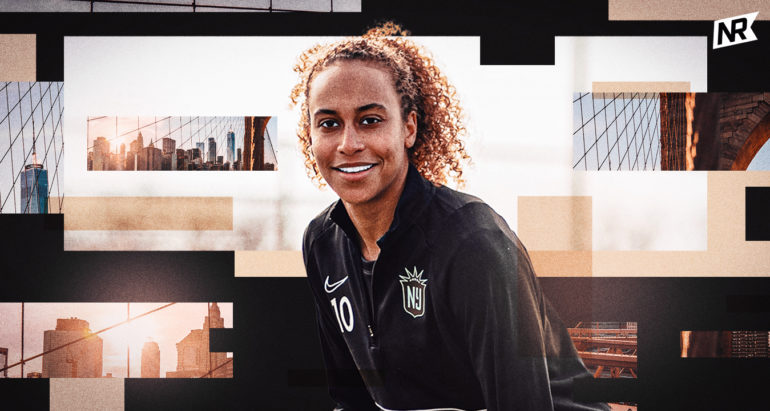 Ellie Jean didn’t plan on becoming a professional soccer player. “I stumbled upon it,” Jean told Nets Republic. “I was always around soccer from a young age. I fell in love with it, but I really had no plan.”

As it turns out, Jean didn’t need a plan. The Penn State graduate is now entering her third year as a pro. She spent her first two years abroad, playing briefly with Denmark’s FC Nordsjaelland in 2020, and then joining PSV Eindhoven in the Eredivisie Vrouwen, the top women’s league in the Netherlands.

Growing Up with the Game

After watching her mother and step-father’s involvement in the University of Connecticut’s men’s soccer program, Jean soon felt inspired to try out the game for herself. She started playing for local clubs, but it wasn’t until she was 12 or 13 that she thought about a future in the sport.

“One day, my mom asked if I wanted to pursue soccer in college, and told me I had to get better if I wanted that,” Jean said. “I hadn’t thought about it – I was just having fun.”

But Jean did start thinking about it. She tried out for Oakwood Soccer Club, one of Connecticut’s premier youth academies. She not only made the team but started going to some scouting clinics for U.S. Soccer. “All of a sudden, I was in the youth national team system,” Jean recalled. “It just happened all of a sudden. I got good and decided to see where it could go!”

Jean is very well aware that her story is not a traditional one. She did not dream of going pro at a young age like many of her contemporaries. But once she saw the results of putting in hard work both on and off the field, she became hooked.

Her hard work was quickly recognized, as Penn State recruited her early on in the process. Although she visited other schools, she had a gut feeling that Penn State was the right choice. The program, the coaching staff, the culture, and the environment all made it feel like a place she could call home.

As Jean ended her time at Penn State, decisions about her future loomed. “I was really curious about opportunities overseas and living in Europe,” Jean recalled. “I wasn’t tied down to anything, and it felt like that was the time to have that experience, and I loved it.”

She did enter the 2020 NWSL Draft as a backup option but was clear in conversations with coaches that her first choice was to go overseas. By heading to Europe, Jean hoped to expand her knowledge and see the game from a different perspective.

In January 2020, she headed to Denmark and joined FC Nordsjaelland but after only a few short months, Jean’s time got cut short by the COVID-19 pandemic, and she headed home.

For six months, Jean focused on her fitness. She trained on her own, unsure of what her next move might be. In May 2020, Jean set out on her next European adventure with PSV Eindhoven, which included playing in the Champions League.

The 24-year-old defender appeared in 22 Women’s Eredivisie matches and four UEFA Women’s Champions League matches for PSV Eindhoven, one of the largest clubs in the Netherlands.

One of the key differences Jean sees between the game in Europe and the United States is how much more technical the game is overseas. Domestically, the focus is more on athleticism. She already had the athlete part down, and she wanted to hone her skills on the ball.

“There are different styles of play, so learning how other countries are playing and how someone else views the game is interesting,” she said. “But at the end of the day, it’s not as different as I initially thought.”

After almost two years at PSV, Jean was ready to take what she learned in Europe and come home. She loved her team and her teammates but could never fully culturally integrate into a country where she didn’t speak the native language.

One motivation for coming home was to get back into the national team pool, which isn’t as easy to do while abroad. During her youth career, she featured frequently for the U.S. Women’s National Team at the U-23, U-20, and U-17 levels, including a spot on the 2016 FIFA U-20 Women’s World Cup.

In the past, I’ve had to ignore the fact that I’m Black, and now at Gotham, I don’t have to ignore it. I can talk with the women on my team who have had similar life experiences and I am learning so much from them.

Being closer to her family and friends was an important factor in her decision, so she was open to the prospect of trying her luck in the NWSL. “I heard about the great things that the entire NWSL was doing and regrouping after all that happened last year – it’s really exciting,” Jean said.

When Gotham FC came up as an option, it was an easy choice for Jean who ultimately signed a one-year contract with a one-year option with the club.

She was not only excited about being coached by Scott Parkinson, but she could play soccer in the New York Metropolitan Area. Growing up in a small town in Connecticut, the allure of New York City was always strong for Jean.

“I love New York City. It’s my favorite place on earth,” Jean said with a smile. “I love how many different types of people there are. It’s so cool to be able to represent such an amazing place.”

A Sense of Belonging

For Jean, the diversity of New York City and of Gotham FC has so far been a pivotal part of her experience. Her mother is Irish and her dad is Dominican, but her dad was not a big part of her life growing up. Because of this, she grew up mainly with her mom’s side of the family.

“I didn’t have a lot of introduction or experience with my Black, Dominican side,” Jean explained. “Growing up in a mostly white town was even more confusing.”

Although she had a great childhood, she grappled with being mixed race. “I didn’t feel completely Black or white, and at school I didn’t see a lot of people like me,” Jean said. “I think I’m still on that journey to figure out how I interpret being Black, and how I can best represent that for me and not anyone else,” she explained.

More recently, she has reconnected with her father and half-brother and is learning what it’s like to have more people that look like her in her life.

“Coming to Gotham was like a complete 180,” Jean said. “Growing up, I played on teams that were either all or mostly white, but coming here, half the team is Black! It’s absolutely amazing.”

At Gotham, although she is still finding her footing with her new team, she feels comfortable in a way that she hasn’t ever before. “In the past, I’ve had to ignore the fact that I’m Black, and now at Gotham, I don’t have to ignore it,” Jean explained. “I can talk with the women on my team who have had similar life experiences and I am learning so much from them.”

Seeing how confident her Black teammates are in their identities is inspiring for Jean. “The way they embrace their Blackness – I want to be like that, I want to stand out like that,” she said. “It’s inspiring and great to be part of a diverse team because I’ve never been part of a team like that before.”

As Jean continues to integrate into the team and the league, she is getting involved in the Black Women’s Player Collective (BWPC). “I want to help young girls who look like me and feel like they have something to bring to the game, and it’s not just about how fast you run – I didn’t get to see that growing up,” Jean said. “Soccer is a great sport and everyone should be able to experience it, no matter the color of your skin.”

Now, Jean is in full swing with Gotham FC for their preseason – and she can’t wait to get started and show what she’s got. “I love to get forward and get aggressive in the attack,” the fullback said. “And I want to add my individual flair.”

In the 2021 NWSL season, Gotham FC was lauded for a strong defensive unit, and fullback Caprice Dydasco received NWSL Defensive Player of the Year. “We have great individuals here, and I am learning from the players that have been here, including Caprice who I’m watching all the time,” Jean said. “She is great at what she does, and I want to learn everything I can from her, Imani [Dorsey], and Ali [Krieger].”

As she trains and learns leading up to the 2022 Challenge Cup next month, Jean has one goal for the year. “I want to tear this league up!” Jean said. “I’m super excited to get started. I think I have so much to offer, and I look forward to enjoying myself, seeing what I can do, and putting in the work.”

While Jean is new to the league, she is certainly not a rookie. As she enters her third year as a pro, Jean is confident in what she can bring to Gotham. “One of the girls said to me that even though I’m new, I don’t feel new – which is a huge compliment,” Jean recounted. “I’m not a rookie, and I’m not going to act like one.”

Although she did not follow the NWSL closely while abroad, she’s excited to jump in and learn about the league – and her teammates are making the transition an easy one. “The girls are amazing. From the first day, everyone was so welcoming, embracing me with open arms,” Jean said.

The training environment and culture of the team are positive, encouraging, and competitive, which is exactly what Jean wants. “Scott Parkinson is so positive,” she said of the head coach. “You can ask questions and make mistakes, and know that those mistakes are needed to get to that next step and continue to grow.”

With the Challenge Cup and regular season fast approaching, Gotham FC has their eyes on taking it all the way to a championship. “We’re a team to be reckoned with this season,” Jean said. “We’re looking forward to proving people wrong, and we’ve got some unfinished business on the field.”

The pre-season Challenge Cup tournament is set to begin the weekend of March 19th, with Gotham FC’s first home game of the tournament scheduled for April 3rd. For more information on how to see Ellie Jean and Gotham FC, visit their website.