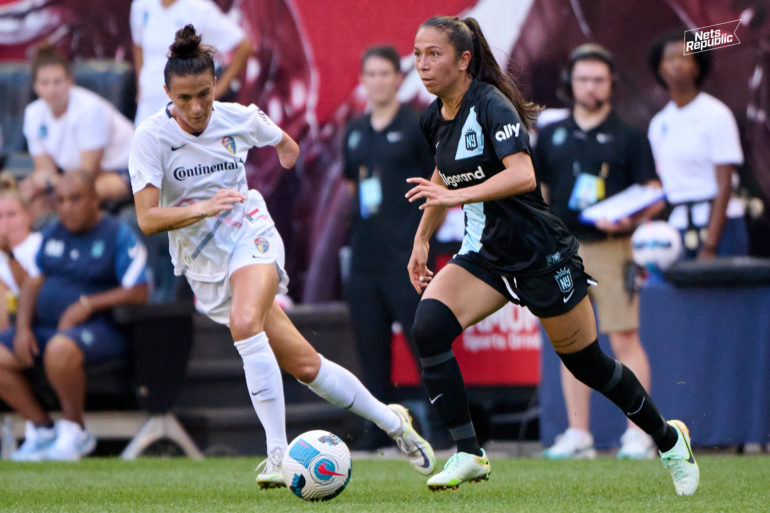 As the off-season rolls on for NJ/NY Gotham FC, they announced Thursday that midfielder Victoria Pickett has been signed to a new three-year contract with a mutual option for a fourth year. Pickett found her way to Gotham FC in a trade with the Kansas City Current in August 2022.

“I am beyond excited to sign a new contract with Gotham FC. The vision and goals of the club align with what I expect out of myself and out of a professional environment, so it was a no-brainer to re-sign with Gotham,” Pickett said in a press release. “When I was traded from the KC Current near the tail end of this past season, I was a little nervous about how I would fit in. But in such a short amount of time I had found my second home in Gotham FC. I was not only accepted, but embraced by my teammates, staff, and community. Gotham FC is an incredible organization and I look forward to contributing to the success of the club both on and off the pitch, and I will do everything I can for this club.”

Pickett’s path to the pros started at the University of Wisconsin where she played from 2015 to 2022 notching five goals and 11 assists in 57 games. In the course of her collegiate career, the Ontario native was named to the First Team All-American, First Team All-Region, and was a semifinalist for the MAC Hermann Trophy.

Her decorated collegiate career led to the 26-year-old being selected 15th overall in the 2021 NWSL Draft. That year, she went on to become a finalist for Rookie of the Year after logging more than 1,500 minutes with one goal and one assist in 19 games with the Current. Since joining Gotham, she has started four of the six matches she played.

“We have made this commitment to Victoria because we see her as a core player for Gotham FC,” said Yael Averbuch West, General Manager of Gotham FC. “We are very proud that she had a rewarding experience with us late in the season and recognized the quality of club we are building. Finalizing a long-term agreement with Victoria is a great way for us to head into the holiday break. This is a day of celebration for our club and our fans.”

What does this mean for Gotham FC?

After Gotham’s disappointing last place finish in 2022, extending Pickett’s contract is yet another move aimed at bolstering the New Jersey side’s roster. Gotham has already made significant moves this off-season including re-signing three of their free agents: Taylor Smith, Ifeoma Onumonu, and Mandy Freeman.

Pickett’s three-year commitment to Gotham ensures a strong presence in the midfield, an area of the team that struggled in 2022. With the return of Allie Long, the option of playing Ali Krieger in the midfield, the second season of last year’s promising rookie Taryn Torres, and the veteran leadership of McCall Zerboni and Kristie Mewis, Gotham is certainly looking to shore up a strong central unit going into 2023.