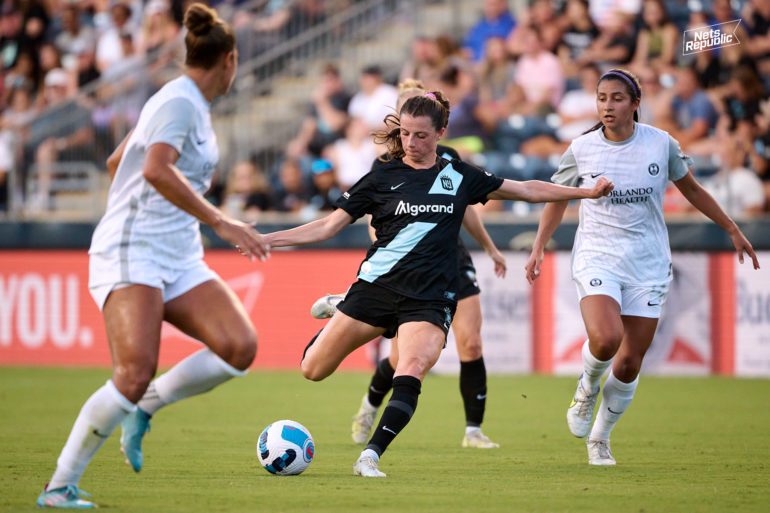 At 50 NWSL Appearances, Paige Monaghan is Ready for More

In January 2019, Paige Monaghan was drafted as the number ten overall pick to the team then known as Sky Blue FC. Fast forward to August 2022, through a pandemic and multiple Challenge Cups, and Monaghan has hit 50 NWSL regular season appearances.

“I remember sitting at the draft and not thinking I was going to get drafted,” Monaghan told Nets Republic. “Now, I’m sitting here today having played 50 games in three years. The little girl in me is screaming!”

For Monaghan, reaching this milestone is incredibly humbling. She is proud of hitting 50 appearances at only 25 years old, especially with a whole year of soccer that “doesn’t count” due to the suspension of the regular season in 2020 during to the height of the COVID-19 pandemic.

Along with the gratitude Monaghan has for reaching this point in her career, she feels especially humbled by the incredible, talented teammates all around her reaching historic NWSL milestones of their own.

“Right now on our team, we have McCall [Zerboni] at 15,000 minutes played, Estelle [Johnson] who hit 100 appearances, and Ali [Krieger] and Kristie [Mewis] over 150,” Monaghan recalled. “I remember thinking, wow, they’ve played so many games, and now one of my own milestones is here, and it came up quickly!”

Especially with the tough year Gotham FC is having on the field, Monaghan believes it is even more important to take a step back and honor the 50 games she has been part of, her health, her happiness, and everything that has gotten her to this moment.

All for New Jersey

Monaghan has played all four years of her pro career for Gotham FC. New Jersey is her home, and the Roxbury, NJ native wouldn’t have it any other way. Hitting 50 NWSL appearances for her hometown team means everything.

“To me, it’s awesome and such an honor to see [this team] grow, and see it grow where I grew up. It means so much to me,” Monaghan said. “I’m a Jersey girl through and through.”

From club soccer, to high school soccer, the New Jersey soccer community has been an integral part of Monaghan’s story. Now, playing for New Jersey’s professional team, she has had a front row seat to all the hard work that has gone into making Gotham FC sustainable and successful.

“To see the growth [of the team] is incredible, and I credit everyone on the staff, everyone who’s buying into Gotham FC today, and fans including Cloud 9 who have been here from the very beginning, who have stuck with us,” she said. “They all saw what direction this team could go, and what an NJ/NY team could be. I feel so lucky that I was drafted here, to play at home, and make an impact in my community.”

Throughout her career, Monaghan has received an outpouring of messages from other New Jersey soccer players, including many young fans. She feels that Gotham FC does a particularly good job of honoring their Jersey roots, so being here, even through the ups and downs, is incredibly meaningful.

Part of this local connection means Monaghan’s support system is with her every step of the way, and this included her 50th appearance which coincided with Gotham FC’s now-annual “Philadelphia home game” played on August 20th at Subaru Park in Chester, PA.

Although Gotham lost to the visiting Orlando Pride 2-1, Monaghan was proud of the team’s performance and lauded her teammate Mewis for an exceptional late goal that gave the team hope in the dying minutes.

“That game was difficult,” she said, “but for the emotions and all the ups and downs of that game, to see my family and friends in the stands so proud and happy for me, it was a humbling moment as an athlete.”

Overall, 2022 has been a hard year for Gotham in terms of on-field results. With four wins and 11 losses, it has been disappointing for a talented team who now finds themselves at the bottom of the table. “It’s not clicking now, but it will soon,” Monaghan said. “We’re not giving up or losing sight of that. Our focus is winning these next games.”

For Monaghan, having her 50th appearance coincide with this difficult time has given her some clarity. “Seeing my family in the stands so proud of me is one of those moments that reminds you what life is really about,” she explained. “Those 50 games had an impact on people, my family, my fans, and that means a lot to me. It’s a moment that got me a little choked up to think about – that those games mattered to others, not just me.”

A Future with Gotham

Looking back on her career so far with Gotham, whether she plays a full 90 or just a few minutes, Monaghan can say she has given it her all every single time. As she looks forward to the next 50 games, she wants to continue giving it her all and use her experiences in the NWSL to reach her personal goals.

“Whether my goal is to be the best player that I can be, or getting a call up to the national team, at the end of the day, I just want to give it everything I’ve got,” Monaghan said. “Thinking back to my first game, I can definitely say I’ve grown, handled adversity, had ups and downs, but at the end of the day, [celebrating milestones like 50 appearances] is a good checkpoint and a good reminder that what I’m doing makes a difference and is part of me.”

As Monaghan looks toward the future, she believes that Gotham is a team that is moving in the direction of being a premiere organization in the women’s game. With a slew of new investors including WNBA legend Sue Bird, NBA star Kevin Durant, and NFL titan Eli Manning, Monaghan sees that people believe in Gotham, their mission, and their future for success.

On a personal level, Monaghan has felt fortunate to have her own support system cheering her on. “My family has been there through thick and thin, through tears on the way home, or silent rides, happy moments, they believed in me when I haven’t believed in myself, and I’m incredibly grateful for that.”

Monaghan also credits the coaches who believed in her, her friends who have supported her, and the teammates who have been there for her. In particular, she credits Gotham teammate Estelle Johnson as being a big part of her success.

“Estelle has been my role model. She came to Sky Blue during my rookie year, and she took me under her wing right from the beginning,” Monaghan said. “She saw something special in me, and she’s been like the big sister I never had. I’m so thankful she has pushed me, helped me, always told me the truth, and held me to high standards. I cannot imagine my career and last four years without her.”

You can catch Paige Monaghan and the rest of Gotham FC this Sunday, August 28th, at Red Bull Arena as they take on Angel City FC. Kick-off is at 5PM and more information is available at GothamFC.com.