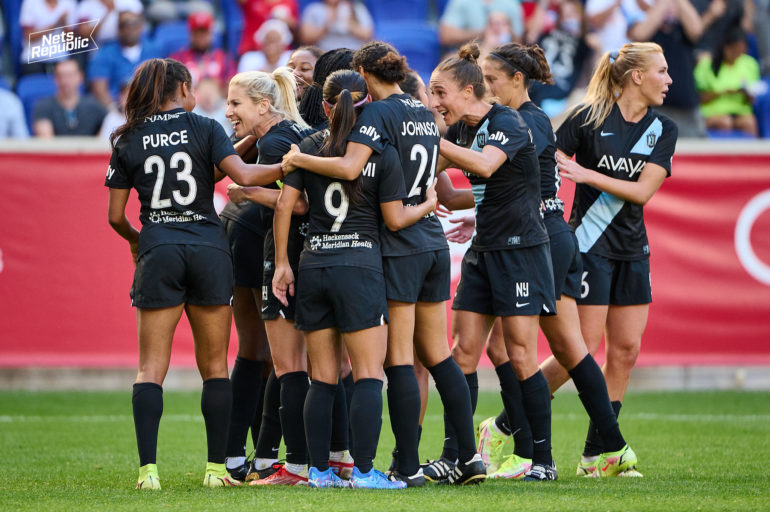 A Year of Upgrades for Gotham FC

Gotham FC is trending in the right direction. As Coach Parkinson said after the team’s loss in the quarterfinals on November 7, “When you’re trending in the right direction, it’s not a straight path to the top.” In taking a look back at the 2021 season, it is evident that the club has made incredible strides and could indeed be on a trajectory to the top of the league.

The 2021 season was still a bumpy one for the organization that was at or near the bottom of the table in the 2018 and 2019 seasons. This year, the club saw the departure of their coach mid-season, the firing of their general manager, a long winless streak, and a league-wide scandal regarding allegations of an abusive coach from another team.

Despite all that, the club stayed true to its new, gritty nature and found hard-fought success this season. The team made it to the playoffs for only the second time in their history. Their first and only other playoff appearance came in the debut season of the National Women’s Soccer League (NWSL) in 2013. Their success was due in part to a number of substantial upgrades at every level of the organization.

Red Bull Arena is among the best soccer-specific stadiums in the country, and this year, Gotham FC called it home. 2020 was slated as the team’s inaugural season at Red Bull Arena, but those plans were thwarted by COVID-19. This year, the team was able to take advantage of the stadium with their expanded capacity and dedicated supporters section, the latter of which was expertly utilized by supporters group Cloud 9 who displayed a number of memorable tifos.

But the upgrades for the club were not just cosmetic. The on-field results gave fans something to cheer about. With a record of 8 wins, 11 draws, and 5 losses, fans never quite knew what to expect from Gotham FC, which is a pleasant turn of events for a team where the expectations in prior years were usually losses.

In fact, with their record, the team had the fewest losses in the league. However, the club also led the league in draws and came in second-to-last with wins. At face value, this record shows that Gotham FC has much to improve, but seems to have the pieces in place to take their success even further in the 2022 season.

A quality team draws quality players, and the New Jersey/New York team had no shortage of stars. The club hosted the final professional season of Carli Lloyd, which drew large crowds to many of her last games. But much excitement came from her teammates who carried the organization to their first playoff spot in eight years.

With the retirement of Carli Lloyd, the team’s only remaining U.S. national team allocated player is forward Margaret “Midge” Purce. Although she missed a number of weeks due to injury, Purce’s acumen for scoring goals could not be contained. She stayed in the race for Golden Boot, scoring nine goals in only 17 matches. This put her in the top five of goal scorers, along with players who had over 20 matches to reach the same level.

Not only did Purce miss a large part of the season, but so did fellow Gotham FC forward Paige Monaghan. Their injuries coincided with the Olympics, meaning other options for the front line including Evelyne Viens and Carli Lloyd were unavailable. Gotham FC would turn to the hero they deserved: Ifeoma Onumonu.

Onumonu played in all of the team’s 24 matches and was also a contender for the Golden Boot with eight goals and four assists. She carried the front line of the club and managed to score even during a significant winless streak in the middle of the season. She quickly became a fan favorite.

The forwards of a team cannot do it alone and rely on players in all positions to contribute. Enter, Allie Long. The defensive midfielder came over from OL Reign in a trade during the 2021 preseason Challenge Cup, and immediately added a piece that the team had been lacking. The World Cup-winning veteran provided a consistent, reliable presence in the midfield. With a passing accuracy rate of 91%, Long was a pillar for a team that favored a possession-based style.

No season wrap-up would be complete without mentioning Caprice Dydasco. The outside back had her biggest standout year since she joined the NWSL in 2015. She was traded to Gotham FC in 2019, suffered an ACL tear in 2020 – her third – and came roaring back. She was in the top three for the league in assists with five to her name and even scored her first NWSL goal. Dydasco was one of only two players to play in every single game this season, the second being Onumonu.

Dydasco also earned accolades from the league, being nominated to Team of the Month every time except for once, and is currently nominated for Defender of the Year.

It is difficult to imagine the team without Dydasco. Able to play right-back or left-back, the 29-year-old was an anchor for the team, defending and attacking with equal prowess. In fact, in a Twitter poll of Gotham FC fans, she was voted MVP by a significant margin, even against players like Purce, Onumonu, and Long.

The Audacity of Hope

This year, the fans club had something it hadn’t had in many years: hope. But it was not hope for hope’s sake. It was backed up by confidence. Confidence in a front office helmed by interim general manager Yael Averbuch West, a team directed by new head coach Scott Parkinson, and a group of players led by newly minted captain McCall Zerboni.

After the sudden firing of prior general manager Alyse LaHue, the team brought in Averbuch West, a former NWSL player founder of the NWSL Players Association. When prior head coach Freya Coombe departed mid-season for 2022 expansion club Angel City FC, Averbuch West went through an exhaustive hiring process to bring on Scott Parkinson, who was previously the assistant coach for the Chicago Red Stars. Along with new assistant coach Beverly Yanez, Parkinson was able to snap the team’s winless streak and sneak them into the playoffs.

Even though the club was unable to make it past the quarterfinals, the improvements the organization has seen this year inspire hope and confidence for the fans. It does seem apparent that Gotham FC is headed in the right direction, and whatever path they take to get there, we are all along for the ride.