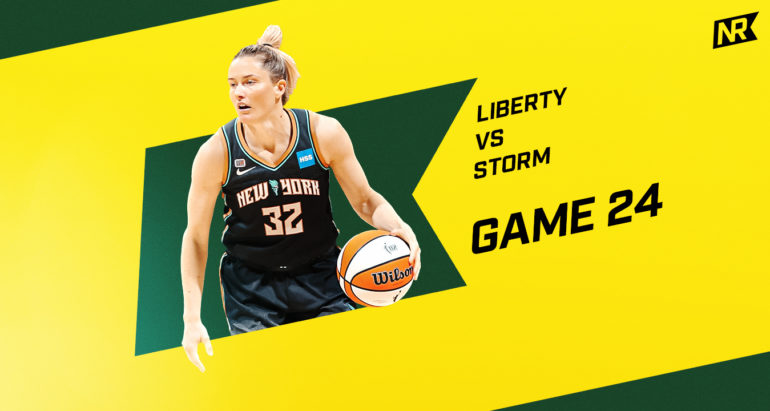 New York Liberty Sweepless vs. Seattle after Doomed Second Half

The New York Liberty got off to a strong start, but couldn’t keep up with the defending champs with their star Olympians back in the lineup.

With their American Olympic heroines back on the court, the Seattle Storm made sure Friday night at Barclays Center wasn’t déjà (seafoam) blue all over again.

Joining Sue Bird back in the Seattle starting five, Breanna Stewart put up a double-double (19 points, 14 rebounds) in the Storm’s 99-83 victory over the New York Liberty. New York (11-13) previously earned a comeback victory over the defending champion Storm on Wednesday night to earn a split of the Seattle doubleheader.

“Yes, the loss hurts but it doesn’t if we learn from it and we can apply it to (Sunday’s game) and get a win there,” Sami Whitcomb said of the Liberty’s effort on Friday. “We weren’t getting back in transition, they were getting buckets. We weren’t doing what we needed to do defensively, whether it was on specific matchups, or whatever it was. I think in those moments teams like Seattle capitalize, and they did.”

New York and Seattle will meet for the final time in Everett on Sept. 2.

Shelter from the Storm

After pulling off an upset win sans Stewart and Bird on Wednesday (each resting after their All-Star/Olympics/Commissioner’s Cup tour), nothing short of an impossible perfect game was likely to work for the Liberty on Friday, as the Storm were back at full strength. Even perfect games are sometimes not enough to beat Seattle, hoisters of two of the last three WNBA Finals trophies.

But the Liberty put out a solid first 20 minutes, a first half that ended with them holding an improbable lead. Though that advantage stood only at a single point (thanks primarily to Seattle’s 9-of-12 output from three-point range), there were plenty of things to be proud of from a New York standpoint.

For one thing, they forced a dozen turnovers and lost only four of their own. DiDi Richards provided yet another spark off the bench by contributing to the turnover margin with three steals. Battling a neutral crowd thanks to the Storm’s well-traveled fanbase, Whitcomb perhaps brought rare unanimity to the proceedings through a shot clocking-beating triple launched from TriBeca. It was part of a 15-point barrage in the first quarter for Whitcomb.

The Liberty led by as many as nine in the first half and took a 47-46 lead into the halftime break. Reality set back in with a 30-16 Seattle advantage in the third quarter, but New Yorkers were enthused that the first half could hint at exactly what this team can be if and when it reaches its full potential.

“That probably was one of our best halves of basketball that we’ve put together this year so it shows growth, it shows improvement, but I think it also shows us that there’s a lot, a lot of growth that still needs to happen,” Sabrina Ionescu, she of 16 points, said in defeat. “Playing against one of the top teams, if not the top team, in the league, you can’t take your foot off the gas and I think that’s what we did a little bit there in the third quarter. We came out, we punched in the first and then we let them punch us in the third and that kind of just dug us into a really deep hole that we couldn’t get out of.

“I think it opened our eyes a little bit to the fact that we got to put together four quarters of good and hard basketball and keep punching and punching and chipping away and we can end up beating some of these top teams.”

Seattle pulled away in the second half through a 53-36 margin. Loyd did most of her damage over the last 20 minutes (16 points) and the Storm capitalized on Liberty turnovers, tallying 21 on New York’s 10 lost balls.

While enthused by what he saw in the first half, Liberty head coach Walt Hopkins had a distressing realization that Seattle “wanted it more” in the second half.

“I thought there was a moment there at some point in the third quarter where it just got very clear that both teams were tired and they played harder. They looked like they wanted it more,” Hopkins said. “They had some tough shots…Jewell (went) 7-of-9 from three again, she’s just a really really good player, and she’s playing really, really well right now.”

Part of the fatigue, Hopkins theorized, perhaps stemmed from a further shorthanded lineup. Jazmine Jones (right foot) and Neah Odom missed their second consecutive games (Hopkins mentioned it was hard to find time for Odom in the wake of Richards’ emergence) while Reshanda Gray wasn’t with the team for personal reasons.

“We looked out of sorts defensively,” Hopkins said of the second half. “It’s not to say that it’s never going to happen again or can’t happen again and certainly it’s not our ideal, look, but we’re a little shorthanded tonight so we wanted to see if that (lineup) could work out.”

The Liberty have been careful with Natasha Howard’s minutes after she took on a majority of the offensive burden in her first game back in Minnesota on Sunday. Howard was held out for a good portion of Wednesday’s victorious fourth quarter and apparently tried to make up for lost time through 27 minutes of action on Friday. She got good looks against her former team, but some forced attempts as the scoreboard became more dire doomed her to a 4-of-19 ledger from the field.

Despite the tough shooting night, Hopkins was nonetheless enthused that Howard found other ways to contribute. In addition to reaching 11 points, her 13 rebounds allowed her to earn her first double-double in nearly a full calendar year. The Seattle alumna also earned a season-best three blocks and had a steal.

“Her footworks a little rusty, everything’s rusty. She’s rusty around the rim. She just needs to get her balance and get her feet back and she’s going to be just fine,” a confident Hopkins said. “That’s why we kept going to her, we’ve got to get her feeling like herself again. She didn’t shoot it well, but she did a ton of things well defensively. She rebounded the heck out of the ball, I think she had three blocks, she had a steal, she had a ton of deflections. She just really impacts the game.”

The shot chart wasn’t friendly to Howard or Wednesday’s heroine Betnijah Laney: the Liberty’s high-scoring pair shot a combined 7-for-31 from the field. Not all shooting news was of a negative nature, though: with a three-pointer in the second half, Bec Allen became the 16th player in Liberty history to sink 100 triples with a torch on her jersey. Allen had 13 points for New York, reaching double-figures in consecutive games for the first time since June.

Up Next: The Liberty will meet the Los Angeles Sparks for the second and final time this season on Sunday afternoon at Barclays Center (2 p.m. ET, YES). New York took the debut meeting by a 76-73 final on June 20, a game commemorating the 25th anniversary of the first game in WNBA history.

Not only will Sunday mark a return to New York for Amanda Zahui B., but the Liberty will also add Crystal Robinson to their Ring of Honor in a pregame ceremony. Robinson played seven seasons with the Liberty (1999-2005) and stands as the franchise’s all-time leader in three-pointers made (400).