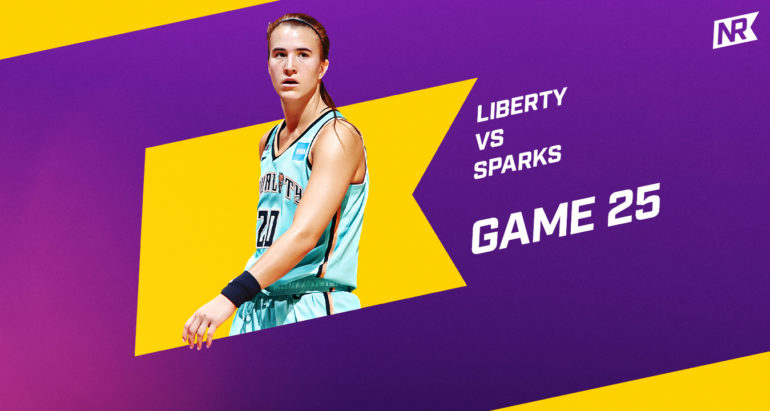 The Los Angeles Sparks extend their win streak to four games as the Liberty’s playoff chances dwindle. A lackluster fourth quarter and a barrage of turnovers brought the Liberty their second straight loss.

The matchup between the two teams, a fan-less “wubble” game due to Tropical Storm Henri, also postponed the Liberty’s 25th Anniversary celebration.

A hot start by the Sparks gave them an early 14-5 lead. Nneka Ogwumike and Kristi Toliver each opened with seven points for Los Angeles. Meanwhile, New York countered with its own 11-4 run courtesy of a trio of threes from Sami Whitcomb and rookies Michaela Onyenwere and DiDi Richards. Reshanda Gray would see minutes over Kylee Shook for this game to give the Liberty a more defensive setup inside. The physical play the Ogwumike sisters and Amanda Zahui B inside was set early on in the game, and the Liberty’s defense plan would need adjusting.

The Liberty saw their token three-point shooting take over in the second quarter. Rebecca Allen accounted for three of them with Sami Whitcomb, Sabrina Ionescu, and Natasha Howard adding to the score line. In total, the Liberty shot 10-of-17 from deep in the first half and went up 45-38 at halftime. Despite 12 turnovers, the Liberty won the rebounding edge and counterbalanced the second chance points that the Sparks added off of New York’s turnovers.

A tight third quarter resulted in the Sparks jumping out to a 6-0 run, quickly tightening the game. The teams frequently exchanged leads throughout the quarter. Betnijah Laney, held scoreless in the first half, dropped her first basket at the 3:31 mark in the third quarter. Additionally, five threes dropped for New York to give the Liberty a six-point lead at the end of the third, 72-66.

The Liberty’s turnovers were their Achilles’ heel in the fourth quarter. Already the league-worst with 17 per game, New York racked up 10 in the fourth quarter, and finished with 22 for the game. A physical game heightened in the fourth quarter, with a flagrant foul called on the Sparks’ Chiney Ogwumike. The follow-up free throws by Laney at the 6:56 mark were New York’s first points of the quarter. Whitcomb nailing another three gave the Liberty their lead back at the 6:36 mark. Furthermore, it would set the Liberty franchise record for threes in a game with 16.

Though neither team shot well in the fourth, the Liberty’s endless turnovers resulted in countless second chance points for the Sparks. Despite this, New York never trailed by more than four points. Finally, fouls were called in New York’s favor. Momentum appeared to be swinging to New York toward the end. Then, misfortunate occurred.

While attempting to drive to the basket, Whitcomb stepped on an opposing player’s foot and rolled her ankle—eerily similar to Ionescu’s ankle injury last season. Whitcomb had to be helped off the court by Ionescu and Liberty trainer Terri Acosta.

Both teams exchanged free throws in the final minutes. Countless opportunities for New York arose to tie or take the lead, only to be followed with another turnover. With seven seconds left, Onyenwere sunk a pair of free throws to cut the lead down to two. After Kristi Toliver missed one of her free throws with five seconds left, Ionescu’s attempted Hail Mary three-pointer was blocked by Brittney Sykes. A solid three quarters wasn’t enough, and the Liberty added another loss in their record books.

The Liberty’s season has been defined by their three-point shooting. When they’re hot, it typically ends up as a win. Sunday night fell just short. Overall, New York finished 16-of-35 from deep (45.7 percent). Allen and Whitcomb were the targets: Allen went 5-for-6, while Whitcomb went 5-for-12.

Howard also shot well, going 2-for-4 and Ionescu followed by going 2-for-5. Onyenwere also contributed, shooting 1-for-3, and Richards nailed her lone three-point attempt. Laney was cold from long distance, going 0-for-4. Overall, a record-setting night saw the Liberty drop 16 threes on the night, marking a franchise record.

It’s clear opposing teams have done their homework on Betnijah Laney. The 2021 All-Star has seen her numbers dip over the past five games. During this stretch, she’s averaged just 10.2 points per game while shooting 20-for-74 from the field (27 percent). Her three-point shooting, a key to the Liberty’s offense, was only 2-for-13 (15 percent). Her typical drive into the paint tactics aren’t working. Taller defenders have adjusted, and Laney appears a bit out-of-control now. Her best shots now are coming within the 15-foot range.

Laney has adjusted in other ways though. In the past five games, she’s averaging 5.2 assists and 1.4 steals a game. Her defense has become a key focus and an integral part when the Liberty close out games. If Laney can adjust her shot within the paint, it could be crucial to the Liberty advancing into the playoffs.

With the Sparks’ win and another Liberty loss, the battle for the playoffs has gotten that much more close. Percentage points are keeping the Liberty in seventh place now. The Mystics also lost against the Seattle Storm and remain in tenth place. Currently, the Liberty have a half game lead over the ninth-place Dallas Wings.

Next Up: The Liberty face the Phoenix Mercury at the Barclays Center on Wednesday. Tip-off is 7:00pm and is televised on YES Network and NBATV.