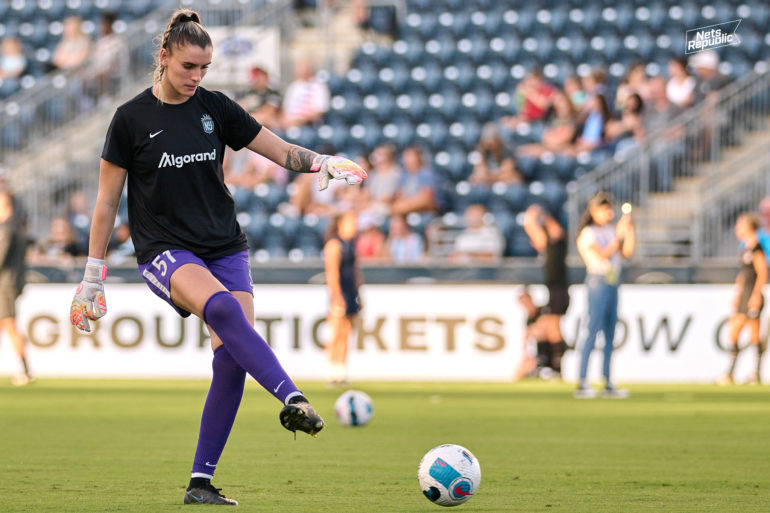 Hensley Hancuff is Ready to Roar in Brisbane

After a full season with Gotham FC, Hensley Hancuff is no longer a rookie. The Oklahoma native was drafted as the 34th overall pick by the NJ/NY club in the 2022 draft and spent the year training behind two legendary NWSL goalkeepers. Now, she is getting the chance to show off what she’s learned and why she is the future for Gotham in net. The 22-year-old goalkeeper is headed down under to join Brisbane Roar FC on loan for the 2022-23 Liberty A-League season in Australia.

“I’m just super excited and I’m super grateful,” Hancuff exclusively told Nets Republic. “I feel very lucky that I’m able to go on this loan, and hopefully when I get down there, I can prove that I should be here [playing at this level]. I will come back and I’ll be making a difference for Gotham.”

It’s tough to be a rookie in the NWSL, especially as a goalkeeper. Playing time is rare, but Hancuff did not let this stop her from soaking up every bit she could during training sessions and on game day, whether she was dressed for the game or not.

“I learned a lot from the first day I stepped into the Gotham culture. I was learning so much from both Ashlyn Harris and Michelle Betos, and the entire team,” Hancuff said. “It was so great training under two of the most experienced goalkeepers in the NWSL. Ashlyn Harris is just a legend and Michelle Betos has taught me so many things on and off the field not only about myself but about the game.”

For Hancuff, the ability to work with Harris for the second time was an incredible opportunity, but when Harris picked up a knee injury in the back half of the season, Hancuff turned to Betos to help her step into that second goalkeeping role.

“During the last couple of months while Ashlyn was out with her knee injury, I was able to spend a lot more personal time with Michelle, get to know her better, and pick her brain,” Hancuff said. “I was extremely lucky to come into an environment where I had these two amazing goalkeepers that I could learn under.”

Under their tutelage, Hancuff was able to get the best of both worlds, learning from two veteran keepers with different styles.

From Harris, Hancuff learned a tremendous amount about technique. “She really helped me understand where I can position myself better in the goal with my size, and she’s taught me how to use my size a little bit more,” The 6’3” keeper said. “Her technique is so detail oriented.”

From Betos, Hancuff picked up important tips on communication. “I’ve learned how to communicate with players and how to learn a lot about people off the field in order to have a better relationship with them on the field,” Hancuff said.

During the 2022 season, Gotham FC never exactly hit their stride. They ended the season with four wins, 17 losses, and one draw during the last match of the year which prevented the Portland Thorns from winning the NWSL Shield.

For Hancuff, this was a learning experience, and not despite the tough season, but because of it. “It’s definitely disappointing to have the season that we had,” she said. “I have never been on a team that has had a losing season like that before. It really opened my eyes to how much a team can come together and change the culture of a team in order for it to be successful.”

Coming into next season, Hancuff believes that this chip on their shoulder will create an even stronger motivation than they had at the beginning of this year. “I think a lot of people are going to use [the downtime of the off-season] to kind of reflect on themselves, reflect on the season, and on what they could have done better, including myself. But I think for next season coming in, everybody’s going to be super excited.”

As Hancuff takes time to reflect on her season at Gotham in the weeks leading up to her loan to Brisbane Roar FC, she is honing in on what she could have done better for the team both on and off the field, and taking stock of how her role on the team changed after Harris’s injury.

“In the beginning, my role was all about taking in everything from Michelle and Ashlyn and doing everything I can to make them better on the field. Whether that’s being clean in practice or telling them the things that I see [during games],” Hancuff explained.

Harris and Betos would bring Hancuff into the fold at every opportunity, turning to her for her insight and helping to build up her confidence as a rookie.

“I’m 22 years old, and Ashlyn is 38, but she’s still looking at me to give her input,” Hancuff said. “And after a game or even at halftime Michelle would come up to me and ask me, ‘What did you see?’ That gave me so much confidence to have them picking my brain about what I saw on the field.”

As the season went on and Harris was out injured, Hancuff became the number two, and that’s when her role changed. “I had to be ready at all moments because as you know, there were a couple of moments where Betos went down and I thought, it’s go time! During that period, I was focused on keeping my body healthy just in case I did get that call-up.”

Although Hancuff never got the opportunity to find minutes this season with Gotham, she is ready to give it all for her new club in Brisbane. She’s ready to experience the culture and visit a new part of the world, but most of all, she’s excited to play.

“It’s been so long since I’ve had a game. I’m excited to take all the things I’ve learned this year and try to apply it to my game and actually see kind of what works and what doesn’t,” Hancuff said. “You can do everything in training, but you’re really not going to know what will work for you until you’re in the game. I’m just stoked about being able to get in between the posts again.”

While the A-league might be a brand new experience for Hancuff, there will be at least one familiar face to help her acclimate to a new country. Gotham FC goalkeeping coach Brody Sams, who is also the former goalkeeping coach for Brisbane Roar, will likely be spending some time in Queensland during her tenure with the club, and she’s looking forward to possibly getting in some extra training sessions with him.

Hancuff and Sams formed a kinship this season, both as newcomers to the NWSL working with legends like Betos and Harris. “I think we fed off of each other’s new energy a lot and kind of grew a bit together as the season went on,” Hancuff said. “He has been so helpful for me off the field because he focuses a lot on mental health and how it translates on the field. I’m so grateful that he’s probably going to be able to be in Brisbane for some of the time that I’m down there.”

Hancuff is looking forward to the A-league season, but she also can’t wait to take what she learns back to Gotham and to the NJ/NY area, a place that she is so grateful to call her home.

“I come from a small town in Oklahoma and never in my wildest dreams did I think that’d be playing in the greatest city in the world. The New York/New Jersey area is a culture that I love to be a part of, and I’m so grateful that everybody accepted me with open arms,” Hancuff said of both her teammates and the fans. “It  just shows what the culture is about off the field and the hard work that people put into their day-to-day lives up there. You see it every single day. It’s just a different mentality, and that’s something that I fully immerse myself in and believe in.”

Even without getting playing time last season, Hancuff built up a dedicated fanbase who affectionately called themselves the “Hancuff Hive.”

“I was just so grateful that I had this big support group. I lived for seeing those signs after games!” Hancuff said. “I may not have been getting time on the field, but I knew that my time was coming because of all the support that I was getting coming into the season.”

For now, Hancuff is focused on getting to Australia, learning from her new team in Brisbane, and getting valuable playing time at an exciting club. “After that, I’m excited to get back and see all these familiar supportive faces and really push for some minutes so I can prove to Gotham fans that I am the player they know I can be.”