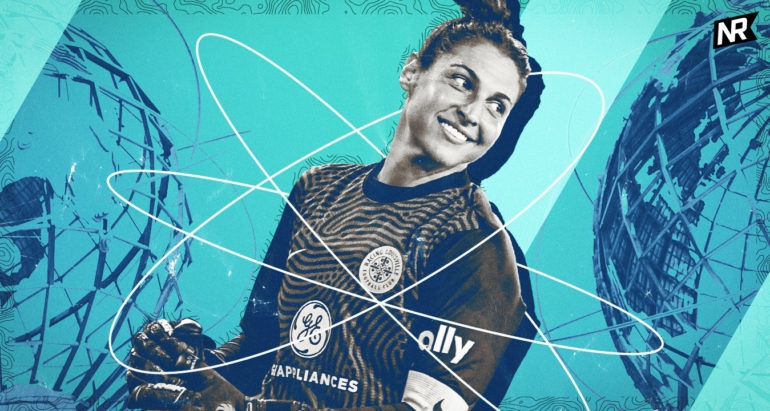 A Keeper from Queens: Michelle Betos is Coming Home

It was the 90th minute, and FC Kansas City was poised to win 1 – 0 against the Portland Thorns at Providence Park on June 19, 2015. The Thorns had earned a corner kick, and in a last-ditch effort to equalize, goalkeeper Michelle Betos ran across the field into the penalty box to try her luck.

The ball came in from the corner, served up by midfielder Allie Long, and Kansas City knocked it away for a second chance. On the second ball served in, Betos expertly tracked it and dove headfirst redirecting the ball into goal and tying up the game for the Thorns. Thousands of fans went wild. To this day, Betos is the only goalkeeper to score a goal in the National Women’s Soccer League (NWSL).

The keeper from Queens is now headed back to the northeast, reuniting with her former teammate Allie Long, and bringing her talents to Gotham FC.

Over the years, Michelle Betos has played all over the world. From Seattle to Australia, and most recently in Louisville, the worldly keeper is finally returning home. “It’s a dream come true,” Betos said of her homecoming. “From the beginning of my career, I always dreamed of playing in front of my family.” Now, her large Italian family can come cheer her on in their own backyard. “My whole family has been so supportive my entire career,” she said. “Now, to know that during the week I can be around, on a recovery day I can have dinner with my grandma – having them close means so much.

Betos, who was the captain and goalkeeper for Racing Louisville last season, had a surprising exit from the team late last year. “I wasn’t trying to leave,” Betos explained. “The initial shock took a second – I had to think about what I wanted to do next – but immediately the dream was Gotham.”

Watching Gotham FC from the outside had been inspiring for Betos. Over the course of her career, she has played with the club’s general manager Yael Averbuch West and their assistant coach Bev Yanez. Seeing the investment these former players were putting into this club made Gotham an even more desirable destination for the veteran keeper.

In the NWSL, when a player is released from a club, there is a 24 hour period where another team can pick up a player’s rights – and as Betos explained, Gotham fatefully scooped hers up. “I hadn’t spoken to them,” she said. “So when I got the call from Yael [Averbuch West] and Scott [Parkinson] that they had my rights, I felt like it was meant to be.” The GM and head coach put the decision in the goalkeeper’s hands and made sure what was best for her was at the forefront of the entire process.

This player-centric approach provided even more incentive for Betos to come home to Gotham, and she sees this as a core value present across the entire organization. “Being player-centric means everything,” she said. “Having a general manager that has been there and done it – she’s always considering things from a player’s perspective – and that has been absent in the league.”

As the league grows, you’re going to have two or three great keepers on your team. That’s the spot you want to be in!

For Betos, getting former players into management and coaching roles is key to growing and bettering the league. “It’s been a crazy 10 years in this league,” Betos said, noting that the NWSL is entering its 10th year in 2022. “Having people in leadership positions who can empathize with us and understand what we’re going through makes it easy for us as players to trust and buy-in.”

A New York State of Mind

Growing up in Queens is an extremely formative experience for anyone. The largest New York City Borough boasts significant diversity, with over 800 languages spoken within its borders. With her mother’s Italian side and her father’s Greek side, Betos grew up having some of the best cuisine at her fingertips, and she’s looking forward to revisiting all the old restaurants she used to frequent with her family.

But a childhood in Queens, as in most of the New York City boroughs, makes it difficult for city kids to latch onto soccer at a young age. “I played a lot more basketball as a kid,” Betos recalled. “That was a much bigger sport in Queens.” In fact, the concrete cityscape is much friendlier to basketball courts than it is to soccer pitches, relegating those from the city to Long Island or New Jersey to pursue soccer.

It wasn’t until Betos was 13 and played in the Empire State Games that she had a head coach invest in her as a goalkeeper. “I was told, you play soccer, not basketball!” Betos said. “That was the first time I thought I could be good at it, and I started investing in it.”

For most of her youth career, she played with the Albertson Fury, a Long Island-based organization. She noticed that on the majority of her regional teams, she was always the kid from Queens. “You see kids from Long Island all the time, but being from Queens is pretty rare,” she said, adding that representing her roots is so important. “It’s something I take a lot of pride in.”

Gotham as as a team embodies NJ/NY – underestimated with a chip on their shoulder. But they’re going to come out and fight, play good soccer, and work their butts off.

Soccer is the world’s game, and New York City is the crossroads of the world. In particular, Queens is a place that people from all walks of life call home. For Betos, representing such a diverse and unique community has incredible meaning.

“Being from Queens, you have a chip on your shoulder,” she explained. “You’re not supposed to be as good as you are, you’re not supposed to hang with the rich kids – and that’s something I’ve always carried with me.” This mindset has driven Betos throughout her career.

The city of New York and the people of Queens helped shape Betos into the person she is. With the formation of the United Soccer League’s women’s side Queensboro FC, Betos sees even more of an opportunity for kids from Queens to imagine themselves as pros, especially the young girls.

“Organizations like Queensboro FC are investing in their local young girls and not losing potential talent to other sports,” she said. “I saw them post on their social media that their dream player is a kid from Flushing, a kid from Queens like me – I love that!”

Betos was that young kid from Queens, and she saw firsthand how difficult it was for her parents to drive her hours a day to different locations to play soccer. “It was impossible for some people,” Betos said, explaining that her parents would spend hours driving her out to Stony Brook for soccer practice. “But having teams like Queensboro FC eliminates that commute, which is an obstacle that kids from Queens might have trying to play soccer at a high level.”

A New Hero for Gotham

As Betos joins Gotham FC, she sees a team identity that fits her own personal identity. “Gotham as a team embodies NJ/NY – underestimated with a chip on their shoulder,” she said. “But they’re going to come out and fight, play good soccer, and work their butts off.” Betos sees Gotham as a team that understands what it means to be from the tri-state area and uses that energy to drive them and bring intensity. Because of this, Betos believes she’s in the perfect place for this point in her career. “You can take the girl out of the city, but you can’t take the city out of the girl!”

The keeper from Queens is not too worried about being a newbie on the squad. Over the course of her long career, the 33-year-old has already played with and against so many of the veterans on the roster. She has been training with many of the players during the off-season, and from the start, it’s felt like home. “There is a very distinct personality type and commitment level that’s part of this organization,” Betos said. “That makes it really special.”

With the recent addition of former U.S. Women’s National Team keeper Ashlyn Harris to Gotham’s roster, Betos will have to compete for that starting spot. For Betos, this is a good thing. “As the league grows, you’re going to have two or three great keepers on your team,” she said. “That’s the spot you want to be in!” She has extreme respect for Harris and knows that by training together, they will both up their game. “Iron sharpens iron, I believe that,” Betos said. “I think it’s going to be an awesome challenge and a good environment – I’m looking forward to it.”

In addition to Harris, Gotham also added draft pick Hensley Hancuff to their goalkeeping roster this year. Betos cannot wait to see the rookie keeper start her pro career, and wants to be there to help in whatever way she can. “My favorite part of this side of my career is investing in players early on,” she explained. “I want to tell them the things I wish I knew then, and help them in their journey.”

In particular, Betos is impressed with the mix of veterans, mid-point, and younger players on Gotham. She wants to give back to Hancuff and the other players in whatever way she can. In conversations with Hancuff leading up to pre-season, Betos told her that she’s here to help. “This is one of my focuses at this point in my career,” Betos said. “I want to give back and really invest in their growth.”

From NY to NJ

As the NWSL grows, all teams hope to fill stadiums and put on a show for their fans. Although Gotham has greatly improved their attendance since moving from playing at Rutgers University to Red Bull Arena, there is still work to be done, including attracting New York City fans to the New Jersey-based soccer facility. While the addition of a New York native might help attract those fans to the game, Betos believes the pull to see the team is already there.

“My message to my fellow New Yorkers is that this team will represent you well,” Betos said. “We have that hard-working mentality, and that’s what we’re about.” In addition to playing attractive soccer, Betos sees a roster that from back to front is made up of players that have fought to be where they are today. “Come out and come see that mentality embodied in this team,” she said. “And it gives kids something to look at and know that they can do it, too.”

While she is not new to the area, Betos is new to Gotham FC. She is here for the fans and wants them to know how much they matter to the players. “We appreciate the fans so much – I hope that doesn’t go unrecognized,” she said, pointing to the recent negotiations on the collective bargaining agreement recently announced by the NWSL. “The fan support has given us leverage and power.”

For fans of Gotham specifically, she wants them to know that she’s proud to be from here, and she’s bringing that hometown pride to represent this team. “I wear my heart on my sleeve and leave it all out on the field,” she said. “I hope that shows in the way I play, the way I approach the game, and the way I support my teammates.”

The pre-season Challenge Cup tournament is set to begin the weekend of March 19th. For more information on how to see Michelle Betos and Gotham FC play, visit their website.