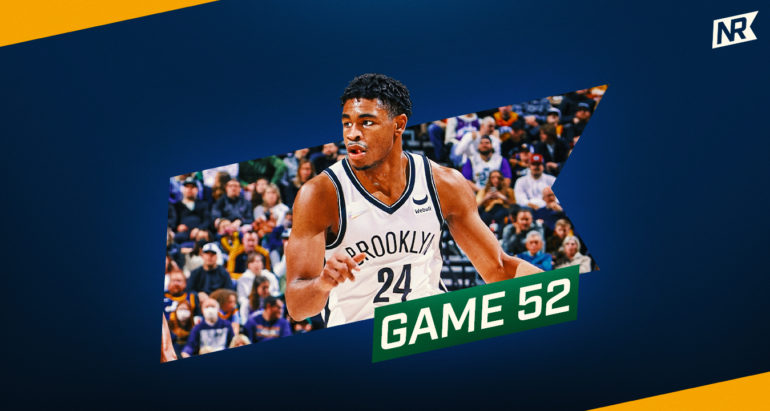 It has been a whirlwind for the Brooklyn Nets. The team had lost six straight games going into Friday night’s matchup against the Utah Jazz; and just hours before tip-off, reports came out that Brooklyn was engaging in trade discussions with the Philadelphia 76ers about a potential deal including James Harden.

As if there wasn’t enough drama, Harden was ruled out for the game because his hamstring injury is still causing issues. Disappointingly, the Nets had no flow offensively due to so many missing pieces, and fell to the Jazz by a large margin.

Once things got underway, it was clear that Brooklyn was unable to find a rhythm with the lack of playmakers on the active roster. James Johnson took eight early shots, but only made one, which put the team in a hole. Within a matter of minutes, Utah had taken a 15–2 lead. As the quarter progressed, Blake Griffin and Cam Thomas provided a spark off of the bench, helping the Nets pull things a bit closer. Heading into the next period, the Jazz led 33–24.

Unfortunately, nothing improved for Brooklyn in the second quarter, it only got worse. Utah would not miss from three point range, dominating both the perimeter and the paint. Before the Nets could even figure out what was going on, they were trailing by 20 points. Cam Thomas and Patty Mills were lone bright spots, as both were the only consistent scorers for Brooklyn in the period. The Jazz went into halftime with a 68–47 lead, as the Nets simply had no answers for them on either end of the floor.

Kyrie Irving has been in a shooting slump the past couple of games, and struggled mightily to find his stroke during the night. In the first half, he was 2–12 from the field with only six points. As the third quarter began, Utah kept their foot on the gas pedal, scoring at will. Donovan Mitchell was sensational from the field, burying three-pointers left and right, deflating Brooklyn’s morale time and time again. Going into the final 12 minutes, Utah led 105–73.

While Brooklyn has been able to make some impressive comebacks in the past, that was not in the books against Utah. No matter what the Nets attempted to do, they quite frankly looked like an inept basketball team. The Jazz rolled right through Brooklyn, coming away with a 125–102 win. For the first time in the “Big 3” era, the Nets lost seven games in a row.

Thankfully, there was at least one positive to come out of the matchup: Cam Thomas is a go-getter. The rookie took it upon himself to try and create life for Brooklyn, and certainly accomplished that. Thomas notched the first 30 point game of his career on 57.9% from the field, alongside four assists.

His confidence is unmatched, scoring at will even at times where it seems uncomfortable. It is amazing to watch his unorthodox approach unfold on the court, as he makes shots that simply look impossible. If Cam can consistently contribute at a high level when other pieces return, the bench will greatly benefit from his presence.

As for the rest of the team, everyone seems disorganized and confused. The Nets have lost seven straight, failing to capitalize in areas where they should, and lacking chemistry. Injuries have played a big role, as Brooklyn rarely has the roster they need to win. That being said, Steve Nash and the coaching staff must figure things out sooner than later. At this point, they have to expect to be missing key players, and strategize for it. Brooklyn is in for a rude awakening if they cannot turn this ship around quickly. Fans can only hope that Kevin Durant, Joe Harris, and LaMarcus Aldridge will make a return soon, otherwise these losses will continue to pile up.