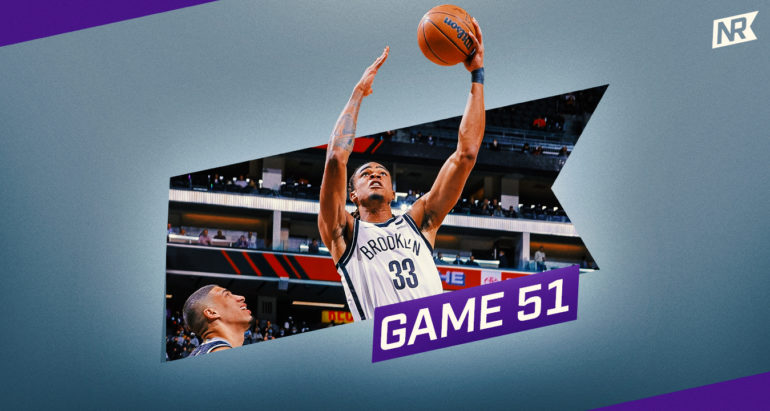 The Brooklyn Nets entered Wednesday night’s game against the Sacramento Kings looking to get back on track with a win after losing to the Phoenix Suns on Tuesday. Despite leading through three quarters against a struggling Kings team, the Nets failed to close out the game as they lost 112-101 as the Kings battled back to win this game.

Coming into this game, both teams were on losing streaks. The Nets lost 5 games in a row and the Kings lost 7 games in a row with their most recent loss coming from the New York Knicks on Monday.

The Nets started the game getting a pick and roll going with James Harden and Nicolas Claxton, Claxton sets the screen and slips to the basket, Kings center Richaun Holmes looks to defend the screen high to apply pressure to Harden. This opens up the roll, which Harden quickly slips a pass to Claxton. Claxton scored with a spin layup over the help defense of the low man in Tyrese Haliburton. This was the formula along with put-back shots that allowed Claxton to get off to a hot start with 11 points on 4-for-4 shooting in the first quarter. The Kings defense on the pick and roll struggled to adjust in the first half, which allowed Claxton to rack up points inside.

The Nets struggled to contain Harrison Barnes, who knocked down two early three-pointers, and Davion Mitchell who gave the Kings a boost late in the quarter as he hit a step back three-pointer over Blake Griffin and scored a layup over Bruce Brown. The Nets were able to go on a 10–0 run to end the quarter as Kyrie Irving got hot knocking down back-to-back transition pull-up threes. The Nets ended the quarter 32–23.

Patty Mills started the second quarter coming off a pindown screen into a handoff in which he was able to knock down a three to push the Nets lead up to 11. Haliburton and the Kings looked to push the tempo, get the ball up the floor quickly and attack the Nets in transition, they also were able to take advantage of corner three-point shots. Buddy Hield chipped in 10 points off the bench in the quarter coming off of mostly transition shots. Hield was able to knock down a three on the wing at the 6:50 mark in the quarter that cut the Nets lead down to four. The Kings’ six turnovers in the quarter would benefit the Nets as they would be able to capitalize on the Kings turnovers and sustain their lead going into the half 62–54.

It looked like the Nets were going to pull this game away with the Kings’ first-half mistakes and Irving, Claxton and Mills leading the way with 40 points combined.

Down by nine points, the third quarter would see the Kings’ defense start to find some consistency and apply more pressure on the Nets. They only had one turnover in the quarter while the Nets had five. Barnes and Mitchell led the way for the Kings with 16 combined points out of the Kings’ 29 points in the quarter. James Johnson would give the Nets a boost as he scored some shots inside. As the quarter pursued, the Kings defense was all over the Nets as they started to rotate well, show help defense early, and close out on shots. The Kings were able to battle back and make this a three-point game to end the quarter 86–83.

The Nets struggled to find consistent offense in the fourth quarter as they were held to scoring 15 points while the Kings scored another 29 points. Poor offense and defense by the Nets allowed the Kings to completely blow this game open. The Nets shot 7-for-21 in the quarter and couldn’t buy a basket as the Kings’ defense took control. Haliburton was able to get by Cam Thomas and score an and-one bank shot floater at the 10:44 mark that gave the Kings their first lead of the game. The Kings did not look back after they gained the lead and were able to move the ball around well and find opportunities to attack the Nets’ defense inside. Haliburton took over in the fourth as he was making plays for his teammates and getting to the rim.

The Nets had 13 total turnovers in the game, seven of those turnovers coming in the second half. The Kings only had 11 turnovers in the game as they took care of the ball better in the second half. The Nets won the points in the paint battle as 56 of the Nets’ points came inside and the Kings only scored 40 points in the paint. According to cleaning the glass, the Nets dominated the game at the rim as 39 percent of their shots came from there and they shot an efficient 75.9 percent for the game at the rim. The Nets would shoot a poor 32 percent from three as 28 percent of their shots came from three. The Kings shot 61.5 percent at the rim for the game and also won the rebound battle 48–40 which would give them extra possessions. The Kings shot a poor 34 percent overall from three but they shot 53 percent in corner threes.

Harden had a pretty rough night, he was a -21 for the game. The Kings defense prioritized forcing Harden and Irving to pass out to the Nets role players, putting guys like Johnson, Griffin, and Claxton into decision-making situations where they had to either score or find the open man. Harden had 12 assists but also some really bad turnovers in the second half that resulted in extra possessions for the Kings.

Harden had a poor defensive game, the effort wasn’t there as he often times would not close out on corner shooters, get out of defensive positioning, and not being able to defend one on one.

Harden also struggled shooting the ball, going 2-for-11, missing shots inside, step back threes, and floaters, shots he would usually make. Harden wouldn’t make his first field goal until the 1:50 mark in the second quarter which was a step back mid-range shot. He wouldn’t score again until the 4:27 mark in the fourth quarter off of a Mills ball screen that got him going inside. Harden was reportedly dealing with a hand injury as he returned to the lineup in the Phoenix Suns game.

Kyrie Irving shot 5-for-15 for the entire game, scoring 14 points, one assist, and had four turnovers. Irving had a tough game scoring the ball as he missed his first two shots to start the game but made his next three, Irving after his first quarter transition baskets would go on to shoot 3-for-11.

Claxton finished the game leading the Nets with a career-high 23 points, 11 rebounds, and five blocks on 9-for-11 shooting. Claxton was providing the Nets with inside scoring that the Kings struggled at times to contain. He worked well in the pick and roll with the Nets star guards, who the kings looked to slow down and allowed him to roll inside freely, draw fouls and make some plays in the short roll.

Claxton was also working the boards, six offensive rebounds, and some put back shots. Claxton defensively looked good, he was able to switch onto guards and slow them down as well as provide interior defense as he blocked five shots.

The Brooklyn Nets are on a six game losing streak and now fall to 29-22 which is good for the sixth seed in the east. The Nets will look to try and pick up a victory on the road as they face the Utah Jazz Friday night.

The Kings opened the quarter on a 9–0 run and the Nets defense failed to stay in front of Haliburton, Mitchell, and Hield, which resulted in a lot of drive and kicks or shots inside. At the 10:30 mark, Harden would throw a poor pass to Cam Thomas in the corner which would get picked off resulting in a Hield transition three. Harden would soon pick up a technical foul for throwing the ball in frustration.

This sequence of events seemed like it was already over for the Nets even though it was still early in the fourth. The Nets’ offense was nonexistent as the team missed shots left and right and the Kings were able to pick the Nets’ defense apart.