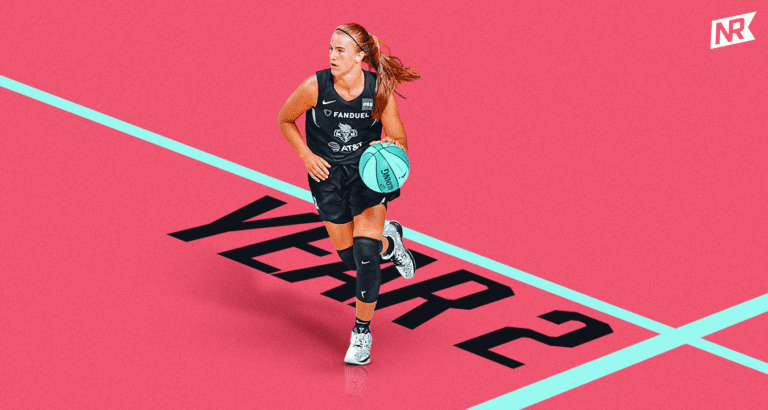 What Can We Expect from Sabrina Ionescu in Year Two?

Sabrina Ionescu is entering her second season in the league after an ankle injury limited her to just three games in her rookie season. In those contests, she put up per-game averages of 18.3 points, 4.7 rebounds, and 4.0 assists. The team and city have high hopes that she’ll be the new face of the New York Liberty.

During those three games, there were some flashes of that potential. The first game she played in as a New York Liberty player, she scored just 12 points but had 6 rebounds and 4 assists against the Seattle Storm. However, during the second game against the Dallas Wings, Sabrina Ionescu broke out. She scored a career high 33 points and had 7 rebounds as well as 3 assists. In that third game which ended up being her final game because of the ankle injury, she scored 10 points. She was getting better and improving every single game with more games she played in.

Even after all the hype leading into her rookie campaign, Ionescu will face even larger expectations during her second season. With new running mates in Natasha Howard and Betnijah Laney, as well as the increased desire for a playoff push, Sabrina Ionescu will have a lot more on her plate this season.

Typically, high draft picks in the WNBA do not have to handle a ton their first few years. This is because they are still growing and getting better. It usually takes two-to-four years for their roles to be significant enough to impact postseason changes. That luxury of time to grow and develop won’t be there this season.

Ionescu will be expected to perform and be ready to play night in and night out. Her second game, in which she scored 33 points and dished out seven assists, showed her tantalizing potential.

Ionescu won’t have to do it all by herself: she has major help incoming in Howard, Laney, and Sami Whitcomb. However, she will be expected to take a part of the leadership role for New York. These players, in addition to adding depth, also bring strong resumes: Howard is a former Defensive Player of the Year and MVP candidate, Laney is coming off a Most Improved award, and Whitcomb is an excellent three-point shooter who can help take some pressure off from Ionescu. Natasha Howard averaged 13.7 points per game, 7.2 rebounds per game and 1.3 steals per game. During her breakout season in 2019, she averaged 18.1 points per game, 8.2 rebounds per game and 2.1 steals per game. Natasha Howard also shoots efficiently from the floor. Her career average is 48.2 percent, which fits in perfectly with Sabrina Ionescu’s ability to pass the ball inside to the posts. Betnijah Laney averaged 17.2 points per game, 4.9 rebounds per game and 4.0 assists per game in her breakout season last season as a member of the Atlanta Dream. Her ability to rebound as well as pass the ball should help elevate some of the pressure off of Sabrina Ionescu, as well as complement Natasha Howard in the front court. Sami Whitcomb shot 35 percent from three as a member of the Seattle Storm and will complement Sabrina Ionescu in the backcourt. Her ability to shoot quickly from three can give the Liberty a boost and give different looks on offense. She also has the ability to handle some of the point guard duties, so when Ionescu is on the bench, Sami Whitcomb can take over ball-handling responsibilities. All this makes the Liberty a threat to make a leap in 2021 and potentially become a playoff team.

When the New York Liberty are in close games down the stretch, they’ll need a leader on the court, someone willing to take the final shot. Ionescu, with her strong temperament and shot-creating ability (for both herself and her teammates) will be expected to grow into that leadership role. It also will not look pretty at times, especially because she didn’t gain much pro experience before her 2020 injury, but eventually, she will blossom in this role. At Oregon, during late game situations, Ionescu would lead the team down the stretch by either scoring a basket, or by assisting to players such as Satou Sabally or Ruthy Hebard, who were the prime beneficiaries of Ionescu’s court vision. She would also often come up with rebounds late in game to seal wins for the Ducks.

Ionescu is a fantastic shooter from all three levels, and her reputation for racking up triple doubles is well known as well. That might be more difficult as she continues to familiarize herself, considering the amount of attention she will draw from the top WNBA defenders assigned to guard her.

Everyone on the team will greatly benefit from her passing ability. There will be some flashy assists to Howard in pick-and-roll play sets. Opposing teams will need to stay honest in crashing the offensive glass after missed shots, due to Ionescu’s ability to throw long outlet passes.

Her defense will be tested a lot this upcoming season. This is something that she needs to work on. It is one of the weak spots of her game right now. Improvements in this area are necessary. WNBA veteran guards will take full advantage of Ionescu’s bad defense. She can get better at this but it will take time. She can learn by not letting the savy veteran WNBA players get in front of her with their moves to the basket as well as drawing more charges towards the WNBA veteran guards.

Off the court, Sabrina Ionescu has already started to star in some advertisements for the New York Liberty and we can expect more of that in the upcoming season. She’s one of the new bright faces of the WNBA, which comes with a lot of responsibility. She recently graced the cover of WSLAM, in which she was called “the future of New York basketball.” In that article, it describes how she ended up being one of the bright new faces by her excellent college career at Oregon (first NCAA player with 2000 points, 1000 rebounds and 1000 assists) and her tireless work ethic. (During the shoot, the WSLAM folks noticed that she would get reps in between takes and photos.)

Sabrina Ionescu has the potential to become an elite guard. For the high expectations to be met, she needs to be able to stay on the floor, helping this team to wins. With all these new pieces and a healthy Ionescu, the New York Liberty are going to improve upon their two-win bubble campaign. The level of improvement, however, hinges on Sabrina Ionescu’s growth in her sophomore season.