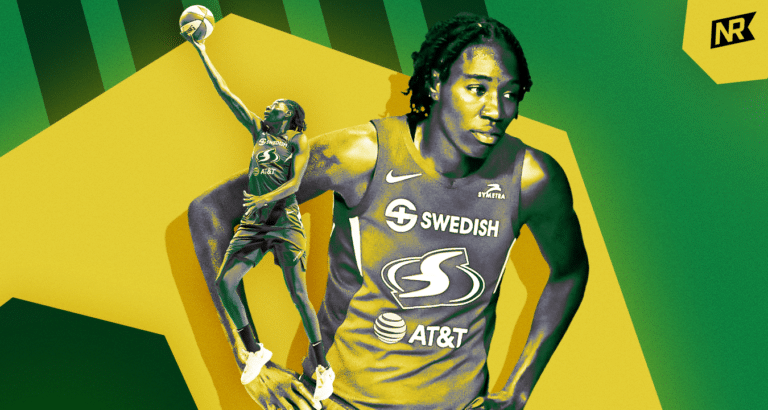 All offseason, there have been whispers of a potential sign-and-trade involving Natasha Howard. The 2019 Defensive Player of the Year was cored by Seattle in January, but as time went by and news of a long-term deal never materialized, it seemed like Howard’s time in Seattle could be nearing its end.

That theory started to come to fruition this week. Seattle gave a fairly large contract to veteran big Candice Dupree, a move that only really made sense if we assumed Howard was gone. And then on Wednesday, the other shoe dropped. Howard was traded to the New York Liberty in a huge, multi-team trade that shakes up the WNBA landscape.

The important stuff for New York is this:

It’s hard to argue that the Liberty aren’t better now, and Howard is a huge, huge part of that. Let’s fire up some WNBA videos and see just why Howard is such an important addition in the latest edition of our Liberty Film Room. Click here for our last one on the Betnijah Laney addition.

Let’s start on the defensive end.

Part of what makes Howard such a force on defense is that she’s got elite-level anticipation. For example, on the play above, Howard’s able to track the ball and jump the passing lane, leading to the steal.

Howard was fifth in the league in steals per game last year with 1.7. Her awareness allows her to get in the right spot to poke away loose balls or to pick off these bad passes. I know we’re going to have a longer piece on the site soon about what Howard brings to the table defensively for New York, but suffice to say that she brings New York something that they’ve needed: a defender who can defend both inside and outside.

In fact, let’s go on a quick tangent here: New York has really reshaped this defense this offseason. New York was already a better defensive team than they got credit for last year, and now they’ve added Betnijah Laney and Natasha Howard. That’s perimeter D. It’s interior D. Combine that with the current players having an additional year in this system and (hopefully) the return of Rebecca Allen, a player who never gets enough credit for being a smart defender, and you can clearly see the makings of a good defensive team on a per play basis. The raw numbers might not look as good because of the pace this team will play at, but I think they can be a top-half team in points allowed per possession.

Anyway, back to Howard. What’s she going to bring offensively? How does she hit into this system?

Maybe the first thing to address, before we get into the film, is what position Howard will play. Because of Walt Hopkins’ system, I think we largely see Howard at the five, as the team will want to continue using shooters at the four to help stretch out the floor. That would leave Howard with plenty of room to work with inside, plus the ability to get involved in the pick-and-roll with Sabrina Ionescu.

Sorry for making y’all relive this Storm/Liberty game from last year, but any time the Liberty add a player, my first instinct is to go back to the last time that player faced New York.

Anyway, on his play we get to see how spacing allows Howard to work in the paint. Seattle puts all four of their other players out behind the arc here, forcing the Liberty defense to let Howard go one-on-one inside. That’s a situation that Howard should win, as she’s able to dribble around the restricted area, find her spot, and put up the score in the post.

Howard shot 66.3 percent in the restricted area last season on 3.6 attempts per game. Among players to take at least two shots per game from there, she was in the lower half of the league. But Howard was more efficient deep in the paint than Amanda Zahui B. or Kiah Stokes were last year, so offensively we should consider her post-game an improvement.

Of course, bringing up the post should be taken with a grain of salt. Per Synergy, only 4.2 percent of New York’s possessions last year were ended via post-up. With Howard posting up on 17.6 percent of her possessions, it’s possible we see more of that, but the pick-and-roll is where I’m most excited.

Howard only was the pick-and-roll roller/popper on 9.7 percent of her possessions, but her 1.273 points per possession rated in the 88th percentile of players last season.

Here’s a play that’s almost like a transition pick-and-roll. After Howard does a great job contesting a Napheesa Collier post up attempt on one end, Howard and the Storm get off to the races. Sue Bird, with the ball in her hands, dribbles up the right side of the floor. Howard comes over, setting the screen to try to free up Bird, who had just gotten into some traffic over there. Two defenders stay on Bird, allowing Howard to get the free roll to the basket for the two points.

One thing I’m hoping we see this year from this team — especially since they have some more reliable three-point shooters in Laney and Whitcomb — is some Spain pick-and-rolls. In theory, that play would look like this: Sabrina Ionescu brings the ball up the floor. Howard sets an on-ball screen at the top of the key for Ionescu, then starts rolling towards the hoop. Laney comes up and sets a second screen to free up space for Howard, which opens up more room for Howard to get a free pass towards the basket. But another feature of the play is that after setting that screen, Laney would pop out to the perimeter, so Ionescu has options: hit Howard inside, dish it back to a (likely) open Laney or to one of the other Liberty players on the perimeter, or just try to finish the play herself.

That could be a pretty tough wrinkle for opponents to stop.

Natasha Howard’s not necessarily an elite player on the offensive end, but she’s a positive on that side of the ball, and an even bigger positive on the defensive end. Because of those things, she her addition is the best sign yet that the Liberty could break their playoff drought and return to the postseason for the first time since Bill Laimbeer‘s final season as head coach in 2017.