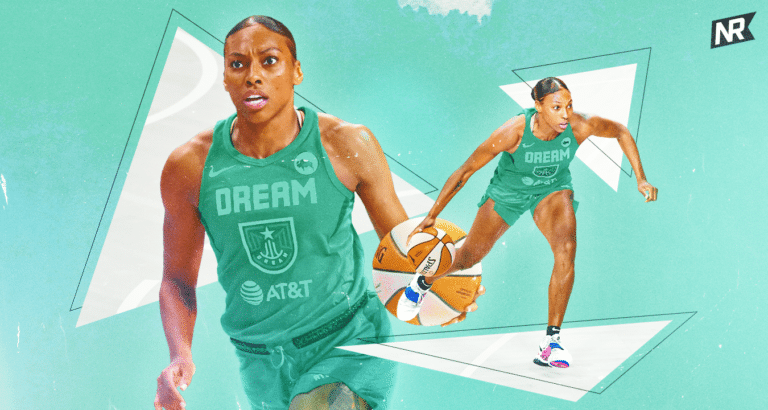 While it’s not officially official yet, it appears that the New York Liberty will be signing free agent wing Betnijah Laney to the team when free agency officially opens on February 1st:

Laney spent last season in Atlanta after spending 2019 in Indiana. Laney’s first three seasons in the league — two years with Chicago, a year off, and then a season with Connecticut — were largely forgettable, but she’s blossomed over the last year, making the All-Defensive team in 2020 while winning the league’s Most Improved Player award. If you’re looking for the pure stat rundown of what Laney did, here it is:

Those are very good numbers. They also represented a huge one-year increase in Laney’s production, which is something that needs to be included in the equation. I’ll be breaking down what the 2020 version of Laney brings to the 2021 Liberty, but let’s not ignore that there is a distinct possibility that Laney regresses after one absurdly good year in 2020. I wouldn’t bet on that regression as I think Laney’s going to be a strong addition to this team, but it’s just worth getting that thought out there.

Anyway, let’s talk about what Laney is going to bring to New York.

First, I want to tell you that you should briefly jump over to Winsidr and check out Dani Bar-Lavi’s piece about the Laney signing. A lot of the work I’m doing here is basically a video conversation with what Dani points out. Go read their work!

Anyway, now that that’s out of the way and we’re back, let’s talk about and watch some video of some reasons we should be excited for Laney in New York.

The primary focus here is on shooting.

It’s no secret that the New York Liberty want to shoot a lot of three-pointers. I mean, they turned Kiah Stokes into a three-point shooter last season, a fact that would sound completely wacky if I’d said it a year or two ago.

The problem? Despite their 602 three-point attempts ranking as the second-most in the W last year, the Liberty shot 27.7% from deep. Probably don’t need to tell you that no team shot worse than that from three, with the next-closest team being Connecticut at 31.1%.

Clearly if Walt Hopkins’ five-out, shoot-the-ball-as-much-as-humanly-possible system is going to work — and I really think it can! — the team needs personnel that can make threes at a higher clip.

I picked the play above because it came against the Liberty and I’d been rewatching some of Laney’s plays in that game. This isn’t, like, a particularly difficult three-pointer, but I think it does show some real confidence in Laney’s shot. She gets the pass over on the right wing and has Kia Nurse on her. Laney fakes the drive, then steps back behind the line and fires up the three. It’s easy to imagine a scenario where the player with the ball here decides to put it on the floor and try to get past Nurse rather than taking this shot with Nurse guarding her, but Laney chooses the shot here.

Per Synergy — and forgive me, for these numbers aren’t broken down by threes — Laney actually scored more points per possession on guarded catch-and-shoot attempts (1.6) than on unguarded attempts (1.324). It’s a small sample, but it suggests that Laney isn’t super bothered by pressure from the defense.

On this play, I love the way Laney hangs back. She comes off a screen with the ball in her hands, but there isn’t a driving path, so she passes the ball off to Blake Dietrick. Laney then stays back behind the arc. Her defender takes a few steps towards the driving Dietrick, at which point the ball is tossed back out to Laney, who catches the pass while moving towards the corner, gets the ball, and just lifts up with zero hesitation for the three.

Overall, Laney was an effective spot-up shooter. Synergy has 19.2% of her possessions logged as spot-ups, and the 1.187 points per possession scored on those plays ranked in the 84th percentile.

Where things didn’t go quite as well was when Laney was used as the ball handler on pick-and-rolls, with the 0.798 PPP ranking in the 42nd percentile. Still, there were times where she showed some prowess in that part of her game:

Laney used the pick here to get herself a dribble jumper here. She was pretty good with dribble jumpers, ranking in the 66th percentile in PPP on them. Laney’s biggest issue was scoring around the basket — 29% of her attempts in the half-court were non-post ups around the basket, but she scored just 1.164 points per possession on those shot attempts. That ranked in the 47th percentile.

The good news for Laney and the Liberty? You probably don’t need to worry as much about that part of her game. The way this offense is designed should mean Laney spends most of her time on the perimeter, but it also means that by spreading the floor out, she’ll have less defensive pressure on her drives than she had in Atlanta. That would ring especially true if the Liberty — either through free agency or the draft — could add another stretch-five type player. Kiah Stokes did fine in that role, but her shot just wasn’t consistent enough to make defenses pay for leaving her open. Get a more consistent shooter there and it will draw the interior defender out even more, opening up Laney to get to the hoop.

The other thing Laney brings is defense. Remember: she made the All-Defense team last year. The New York Liberty were much better than you might think on defense last year. They had the best defensive rating of any non-playoff team. They were second in blocked shots.

But what they can really use is a player who can make things happen as an on-ball wing defender. As Dani pointed out in their Winsidr piece about the addition:

Lots of players can knock down open threes. Not as many can knock down contested threes though, and even fewer can do that while also fixing major holes on the defensive end.

I mean, just watch what Laney does on this play. She picks up Kahleah Copper at the top of the arc, but a nicely-set screen frees Copper to start driving. But Laney fights past that screen and adeptly picks Copper back up before she’s even into the paint. From there, Laney sticks to her like a burr sticks to a sock. She gets her hands up, forces Copper to stutter around a little, and then eventually is in a position to reject Copper’s shot attempt.

Free agency is still young and the New York Liberty probably aren’t done. But adding Betnijah Laney into the mix in Brooklyn is a huge, huge first step. Her shooting and her defense fill important needs for this franchise and help this team become notably better as we head into 2021. She’ll help Walt Hopkins run his offensive system and will create issues on the other end of the floor as well.