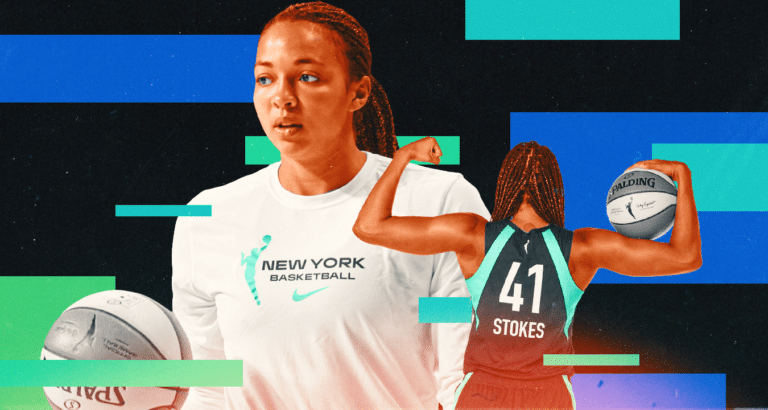 Imagine, if you will, a time machine. What’s the most confusing thing you could tell yourself one year ago about the 2020 New York Liberty? That they have seven rookies? Sure, weird, but we knew they’d be rebuilding. That they traded Tina Charles? Nah, could imagine that. That Kiah Stokes is currently tied for second on the team in three-point attempts?

Bingo. No other fact about this team would have me more confused than knowing that Kiah Stokes has attempted 11 three-pointers in three games. The same Kiah Stokes who gone 0-for-3 from deep in her first four seasons in the WNBA. That Kiah Stokes.

But that’s what happens when your team has a new head coach who decides to lean all the way into the idea of a versatile offense that needs everyone to shoot the deep ball: you end up seeing Kiah Stokes firing away from behind the arc.

With this in mind, I decided to dive into film from the first three games and look at how Walt Hopkins has been using Stokes. Not just the threes, though they’re part of it, but what her role’s been and how that’s changed from the past.

Here was the first three that Stokes made. It comes via the break, with Sabrina Ionescu leading things. Ionescu dribbles up to the right wing, then sees Stokes across the court, fires the ball over to her, and Stokes stops, catches, and drains a three for the first time.

One advantage of getting the ball to Stokes here is that it caught the defense off guard. Stokes is a big. You expect her to make her way into the paint if this play evolves into a half-court set, or to stay out of the way and let Ionescu drive inside if the play remains of the fast break variety. You don’t expect the ball to be flung her way, and you especially don’t expect her to shoot once that ball arrives.

Let’s contrast that with the other three she made:

Here, the Liberty are in their half-court offense, playing four out with Stokes down near the block.

The ball gets delivered to Stokes. This might be where a different kind of offense does one of two things: has Stokes post up and try to score inside, or has Stokes throw it back to an open shooter for the catch-and-shoot three.

But a fun wrinkle of the Walt Hopkins offense is that once Stokes throws it back to Ionescu, she retreats away from the post. And when Ionescu drives toward the basket, Dallas sends Stokes defender to double Ionescu, while Stokes sneaks out even farther, where she has the open three. She takes it. Ball goes in. Boom. Three points.

Of course, this idea for how Stokes gets used only works if she can start to consistently make these threes. Right now, she sits at 18.2% from deep on the year. At that rate, defenses will keep leaving her open, but she’s not going to convert at a high-enough points per shot rate to make it worth having her shoot these.

If she can become dangerous enough that defenses actually need to account for what Stokes can do, that’s where this starts to work. If the defense can’t decide to double the driver and leave Stokes open, that driving player now has a much easier lane to the basket.

I love the theory of how spacing will work for New York. It’s not a reality yet, but we can see in how Stokes is being used what the team wants to do. Now, the shooters just have to convert enough that defenses have to stick with them at all times. Once that happens, the spacing will lead to a much better-looking offense.

The last time we saw Kiah Stokes on a WNBA court, back in 2018, her playtype usage broke down like this:

The interesting wrinkle here is that you might expect Hopkins offense to lead to fewer post ups, and essentially it does, but Stokes wasn’t posting up a ton back then either.

Where the bigger differences come are in how much less she’s cutting. No possessions from her have been logged as cuts this year, while in 2018 that was her most used playtype. Instead, she’s spotting up on half of her possessions now, a pretty big increase from the 9.5% before.

That spotting up also takes away something else from her arsenal, as it puts her out of position when it comes to offensive rebounding and put backs — right?

Well, her 1.3 offensive rebounds per game are a career-low, but just by a little, as she had 1.4 per game in 2018. She’s still positioning herself well to get some action on the offensive glass, even if it means flying in from the side to grab a loose ball as she did against Seattle for her one offensive board in that game. It’s just that now, she’s doing other stuff on the court, leading to more shot attempts and lowering how big of a percentage putback chances factor into things.

Still, the three-pointer has become an outsized piece of her game. Look at these box scores:

Let’s go ahead and take a quick look at her non-threes.

On this one, Layshia Clarendon delivers a well-placed pass to Amanda Zahui B as she cuts towards the paint. Seattle seems to just kind of forget that Stokes is there:

So, Zahui B passes it over the top to the wide-open Stokes, and while Seattle blitzes at her immediately, she still gets the reverse lay-up.

Here’s her one attempt against Dallas:

This one is a fast break bucket. A good, long Ionescu pass finds Stokes sprinting towards the basket with a smaller defender on her, which leads to the layup.

And here’s the other attempt, from the Atlanta game:

I’m not a huge fan of posting up as, like, a team’s main weapon. They aren’t the most efficient shots in the world, and the defense can bother them more than other types of plays.

But I do think diversifying your team’s approach is smart, even if you only do it a little bit. Stokes doesn’t score on this play, but she did a great job of backing her defender down and getting the ball into a good spot where she could have scored.

If Stokes continues to fire blanks from deep, Hopkins needs to find other uses for her. She’s got the strength to be a strong inside presence in a four-out offensive system, and while I like the idea of versatility and of getting everyone moved around the court to see what happens, sometimes you need to do something else. Let Kiah Stokes work in the post just a little more, even if it’s only going to be once or twice a game that she attempts a shot down there.