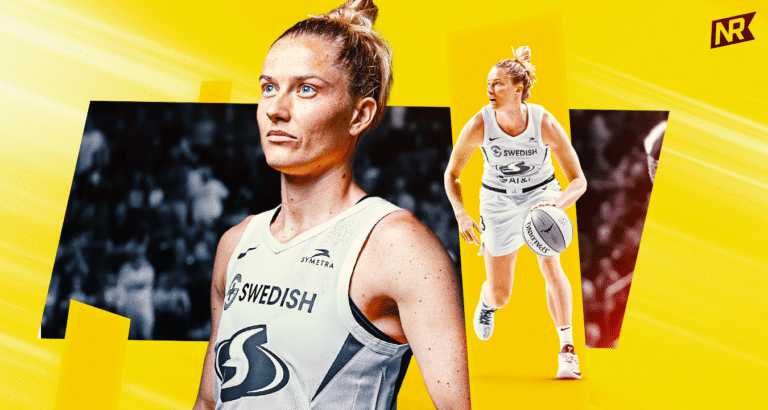 What Sami Whitcomb Brings to the New York Liberty

While Natasha Howard’s acquisition via sign-and-trade was a major move for the New York Liberty seeking to make some noise during this year’s free agency, she wasn’t the only member of the Seattle Storm switching coasts. New York also brought over Sami Whitcomb in exchange for the rights to another Aussie hooper, Stephanie Talbot. Talbot一picked up last year in a deal with the Minnesota Lynx for a second-round pick一never suited up in seafoam, opting out of the 2020 bubble season.

Sami Whitcomb, a 32-year-old guard from California, first went undrafted in 2010. Whitcomb had a chance in training camp with the Chicago Sky that season, but did not make the final roster, so she took her game overseas. In Europe, she played in Germany, Slovakia, and France, but she also totaled four years apiece in two separate Australian associations: the State Basketball League (SBL) and the Women’s National Basketball League (WNBL). Whitcomb gained Australian citizenship in 2018 and joined the Opals, the country’s national basketball team. During that year’s FIBA Cup, alongside new Liberty teammate Rebecca Allen, Whitcomb and the Opals claimed the silver medal, besting all but the United States.

Whitcomb made it back to the WNBA in 2017, joining Seattle, where she would play for four seasons before last week’s sign-and-trade. There, she would win two championships and cement herself as a reliable shooter off the bench.

Last year, Coach Walt Hopkins and his staff installed a five-out system, predicated on constant movement and cuts, which generated tons of good open looks from deep. The problem, of course, was that the roster construction didn’t quite mesh with the gameplan. Sabrina Ionescu’s early-season injury一coupled with the opt-outs of Allen, Marine Johannès, and Asia Durr一left the Liberty short on shooters. Despite attempting the second most threes in the W, New York ranked dead last in three-point percentage, hitting just 27.7 percent of their attempts.

Whitcomb, with her career 35.1 percent from three, is a volume shooting deep threat. Last season, she topped that average by three percentage points, setting a career-best with 38.1 percent. Her 32 long-range makes ranked 17th in the Bradenton bubble, though she hit that mark in just 363 minutes (16.5 minutes per game). The 16 players ahead of her averaged 601 minutes each, or 27.3 minutes per game. Only one player on last year’s Liberty squad一Amanda Zahui B一made more deep shots, though her total of 34 came in 168 more minutes.

Whitcomb proved especially effective in transition last season, scoring 39 points on just 30 possessions (1.3 points per possession [PPP]), which ranked 10th in the WNBA. Among those makes were seven threes, including this hustle play that led to an open shot from the corner:

More than Just a Three-Point Threat

While Whitcomb is rightly recognized for her ultra-quick release from behind the arc, she’s also a solid defender. With the exception of an off-year in 2019, Whitcomb has ranked in the top quarter of defensive PPP in each of her other three WNBA seasons. She’s an effort defender, chasing plays and making smart rotations.

On the offensive end last year, Whitcomb began to take advantage of aggressive closeouts. In Seattle, she would often catch the ball curling off screens. With her primary defender on her back, Whitcomb would assess the defense, all while keeping her dribble alive. Either a hesi or an inside-out move would get secondary opponents to bite, giving Whitcomb a chance to explode past them and finish at the rim.

“I think making the most and taking advantage of hard closeouts and people only identifying me as a shooter,” Whitcomb told Nets Republic. “It was definitely something I was working on, and something I was trying to utilize more. Not just for me, in scoring opportunities for myself, but it made me someone who could then create for my teammates and within our offense, because the ball didn’t just die with me, [where] I either shot it or couldn’t do anything else… It created a lot of easier and better shots for me.”

Last year’s efficiency landed Whitcomb in the 90th percentile一or 15th in the entire WNBA一in PPP, according to Synergy Sports. On 171 possessions, she scored 178 points, accounting for a 1.041 PPP. Over the past two seasons, Whitcomb’s assist percentage has skyrocketed; last season, despite putting the ball on the ground more, her turnover rate was at its lowest ever. She’ll likely spend a lot of time with a young second unit, so having an assertive guard finding buckets (and teammates) with ease will be a huge boon for New York. This off-the-dribble evolution, in which flatfooted defenders were left behind, should continue in New York’s spread offense, with shooters spaced everywhere.

All offseason, GM Jonathan Kolb has stated that the goal for this offseason was to have a “hybrid rebuild,” and these transactions align with that thinking. “It’s rare that you could mesh that together, in terms of vets and youths at the same time,” Jonathan Kolb told the media last week. “That’s what we’re trying to do, in terms of developing players, but being highly competitive at the same time.”

Last season, New York fielded one of the youngest teams in WNBA history. Seven rookies crowded the Bradenton bench in what turned into, essentially, a redshirt season for Coach Hopkins’ team. A pair of the “baby vets,” Zahui B and Kia Nurse, are now elsewhere, leaving a leadership void. Whitcomb’s experience in high-level competition, both with the Storm and overseas, makes her an immediate asset to New York’s young players.

“The part of my game that I hang my hat on is being a hard worker,” she told assembled media on Thursday, in response to a question from Erica Ayala. “I like to get in the gym, I like to work on my game. I like to be the player that comes in and does whatever you need me to do. I’m hoping that style will be something that lends itself to earning the respect of the other players.”