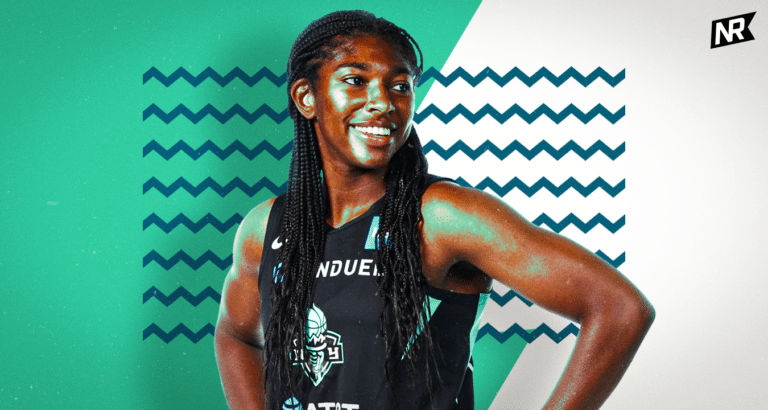 As Jocelyn Willoughby turns 22, NR takes a look a what those around the league are saying about the New York Liberty’s Virginia alumna.

In the latest New York Liberty birthday celebration, sophomore Jocelyn Willoughby turns 22 on Thursday. Willoughby, the 10th overall pick of last spring’s draft, was traded to the Liberty shortly after her choosing. She averaged 5.8 points and 2.4 rebounds during her rookie season staged in Florida.

Nets Republic, in honor of Willoughby’s birthday, looks at what three influential voices in the Association have said about her career thus far, encompassing her endeavors both on and off the hardwood.

“I think definitely her game translates. Her body translates. She can score at a high clip and high efficiency from the three-point line. She can take it to the basket. She’s got a good frame. She’s a good finisher. She gets to the free throw line. A lot of potential… that’s in a lot of ways what the draft is. It’s not only what they’re going to be right away, but with seasoning, playing overseas, more time with your WNBA team, what can you become? Do you have those tools? And she is a player who has those tools.” – former Liberty star/current ESPN analyst Rebecca Lobo on Willoughby before the draft.

In the NCAA’s final ledger back in 2019-2020, the talents of the ACC were on full display, with three ranked teams bringing eyes to their draft day prospects. Willoughby, on a struggling Cavaliers squad, was in a tough spot of sorts as, even if March Madness commenced, Virginia was in no position to make it to the dance with a dismal 13-17 mark. But Willoughby’s strong showings in difficult contests, united with a never-say-die attitude, made her an intriguing prospect in the latter stages of the first round.

“We talk a lot about consistency with the younger players… the thinking with Joce is that she’s the quintessential teammate, she’s an eager learner… she’s always going to do what’s necessary. She shows up every day… Jocelyn’s in every open gym opportunity. She never misses a day, no matter if she plays two minutes or 20… these are the moments that are really special.” – Liberty head coach Walt Hopkins on Willoughby toward the end of last season

A common trope among those praising Willoughby’s game is her workhorse attitude and an ability to act and play beyond her youth. Her resiliency has also been a strong trait as she’s moved from one rebuilding program in Charlottesville to another in Brooklyn.

That maximum effort was fully on display in the Bradenton bubble, promisingly responding to the growing pains of being a first-year rookie talent. During the latter stages of August, Willoughby was struggling to carve out a consistent spot in the Liberty rotation, playing 10 minutes or fewer in five games of a seven-tilt stretch. Nonetheless, she remained close to Hopkins on the bench, and the patience eventually paid off through a strong showcase in the Liberty’s August 25 win over Chicago. Hopkins’ comments from above came after that triumph, during which Willoughby put in 14 points on a perfect 5-of-5 shooting.

“Jocelyn mediated the discussions with both insight and charisma, her enthusiasm for the novel and the thematic conversations apparent as she engaged with each question or comment. She rotated through the virtual raised hands for hour-long sessions, creating a series of deeply thought-provoking talks that helped further my appreciation for the work. I look forward to seeing Jocelyn’s continued growth within the Brooklyn community, as a role model and representative of the Liberty family.” – NR’s Myles Ehrlich on Willoughby’s book club, Read What You Sow

Perhaps she’s not a “baby vet” quite yet—even if a former holder of the title, Amanda Zahui B, called her development “beautiful”—but Willoughby has been a vocal voice in not only New York basketball but cultural affairs as well.

In January, Willoughby opened the Read What You Sow book club in conjunction with the Liberty and local coffee shop, Cafe con Libros. The group is described in its mission statement as “(exploring) the injustices disproportionately facing Black and Brown people within healthcare, education, and other social systems fundamental to the welfare of all people through the lens of womxn of color.” Brit Bennett’s historical fiction novel, The Vanishing Half, was the first piece the group covered.