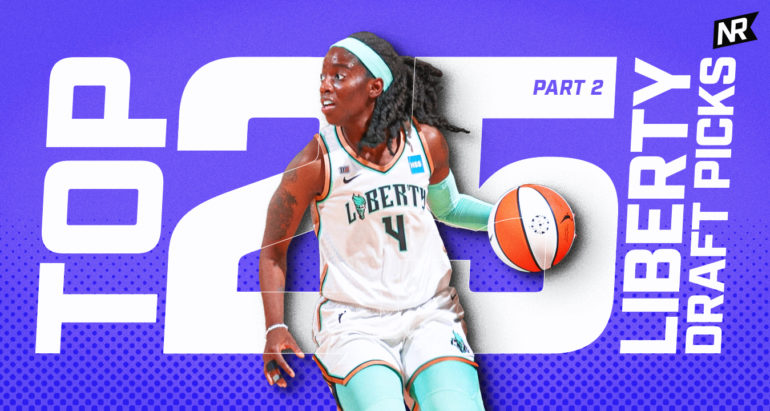 The celebration of the Liberty’s 25th anniversary continues. In part two of my five-part series, I continue to honor the top 25 picks in New York Liberty history with a break down of picks 16th through 20th. To get caught up on picks 21-25, read Part One.

What went into the rankings? Overall statistics, number of games, seasons with the Liberty, as well as any awards and playoff appearances. An athlete’s impact off the court with fans and their communities also entered into the consideration.

As a slight reminder, though likely considered some of best ever to play for the Liberty, the following players were not drafted by New York. Rather, these players were acquired either through a trade or via free agency:

Kylee Shook was drafted 13th overall out of Louisville and became the third former Cardinal on the roster in a two-year span, joining Jazmine Jones (12th overall in 2021) and Asia Durr (2nd overall in 2020). Shook would play 20 games in Bradenton as a rookie, all off the bench, averaging 4.1 points per game (PPG) and 2.8 rebounds per game (RPG). Currently in her second season, Shook has been frequently thrust into the starting line-up. This happened first due to the late arrival of Natasha Howard, then again after Howard suffered a knee injury in just her second game. Though the free agency acquisition has returned for the start of the second half, Shook has started 19 of a possible 22 games at this point.

Her court-time from year one to year two has increased from 14.5 to 21.9 minutes per game (MPG). One of the team’s most improved players, Shook’s statistics have increased to 6.5 PPG and 5.0 RPG while shooting 45.2 percent (up from 40.5 percent) from the field and 37.7 (up from 17.6 percent) from three-point range. Even with the return of Natasha Howard for the Liberty, Shook has locked herself as a formidable frontcourt player for the Liberty. Her ability to create out of the pick-and-roll is something most coaches wish they could execute daily.

Kisha Ford (now Ford-Torres) was drafted 27th overall in the inaugural WNBA draft out of Georgia Tech. During her two seasons with the Liberty, she would average 4.5 PPG and 1.5 RPG on 41 percent shooting from the field through 58 games. Ford was a key member for the Liberty off their bench during their early success that included a trip to the 1997 WNBA Finals.

Following the 1998 season, Ford-Torres would be selected by the Orlando Miracle with the 4th overall pick in the 1999 expansion draft, though Orlando waived Ford-Torres on July 12, 1999. In 2000, the expansion Miami Sol signed Ford-Torres as a free agent, where she would play her final two seasons in the WNBA. Following her basketball career, Ford-Torres would go on to earn her master’s degree in healthcare and international business from Baker College in 2001.

In 2002, Georgia Tech inducted Ford-Torres into the school’s Sports Hall of Fame. As of 2016, she’s a deputy sheriff for Brevard County, Florida and has served in the Army National Guard as a 1st Lieutenant – Battalion Staff Officer and a 2nd Lieutenant – Platoon Leader.

Jaz Jones was drafted in the first round, 12th overall pick, in the 2020 draft out of Louisville. A dynamic defensive guard, Jones would average 10.8 PPG, 4.1 RPG, 2.3 assists per game (APG), and 1.4 steals per game (SPG) in her rookie season. On August 12, 2020, Jones would record her season-high (and still career-high) of 24 points on 50 percent shooting. These numbers would earn Jones a spot on the All-Rookie team alongside Crystal Dangerfield, Julie Allemand, Chennedy Carter, and Satou Sabally.

Jones’ role in her sophomore season has been slightly reduced due to the additions of Betnijah Laney and Sami Whitcomb in the backcourt. Despite this, she remains an integral part of the Liberty’s rotation and formidable defensive stopper. One up-tick this season has been her improvement from three-point range, having gone up from 33.3 percent her rookie year to 39.1 percent this season. She’s been a major catalyst in several New York victories this season, scoring 14 of her 16 points in the fourth quarter of a two-point win over Phoenix and was a key cog in engineering a 20-point comeback over Washington.

Jackson (now Jackson-Jones) was drafted with the fifth overall pick in the 2007 draft out of Texas. Jackson-Jones would play in all 34 games her rookie season, compiling averages of 5.1 PPG, 3.1 RPG, and 0.6 SPG. Her statistics would jump in every category in 2008, climbing to 8.3 PPG, 5.7 RPG, and 1.0 APG. 2008, including a career-high 51.6 percent from the field. The 2009 season saw the Liberty failing to make the playoffs and Jackson-Jones’ numbers would drop to those similar in her rookie season.

In 2010, the New York Liberty traded Jackson-Jones midseason to the Tulsa Shock in exchange for Plenette Pierson. Through 102 total games with New York she would amass 600 points and 391 rebounds. Jackson-Jones would go on to spend the 2011 and 2013-2015 seasons with Tulsa and played her final WNBA season with the Los Angeles Sparks in 2017. In April of 2018, Jackson-Jones would announce her retirement and that May would join the Texas Longhorns as an assistant coach.

With the 10th overall pick in the 2011 Draft, the New York Liberty selected Alex Montgomery out of Georgia Tech. Montgomery’s first three seasons would be spent in Newark, NJ while Madison Square Garden was undergoing renovations during the summer. Her numbers in her first two seasons were less than impressive due to playing limited minutes backing up Cappie Pondexter and Nicole Powell.

Montgomery’s minutes increased significantly in 2013, up to 23 per game (up from 8.1 in 2012). Playing in all 34 games, she would average a career-high 6.1 PPG, alongside 5.2 RPG and 1.7 APG. Though the Liberty would miss the playoffs, Montgomery cemented herself into their rotation and would go on to start for them for 20 games in the 2014 season. Despite the improvement from Montgomery, New York traded her to San Antonio Silver Stars ahead of the 2015 season in exchange for their ninth-overall pick (Brittany Boyd), ending her her time with New York. Through 124 games, Montgomery accrued 525 points, 412 rebounds, 123 assists, and 71 steals.

She would play the next three seasons with San Antonio before signing with the Chicago Sky as a free agent for the 2018 season, her final year as a pro. Since then, Montgomery has coached the Steilacoom High School girls basketball team.

The next five players in the countdown will be revealed the week of August 23.