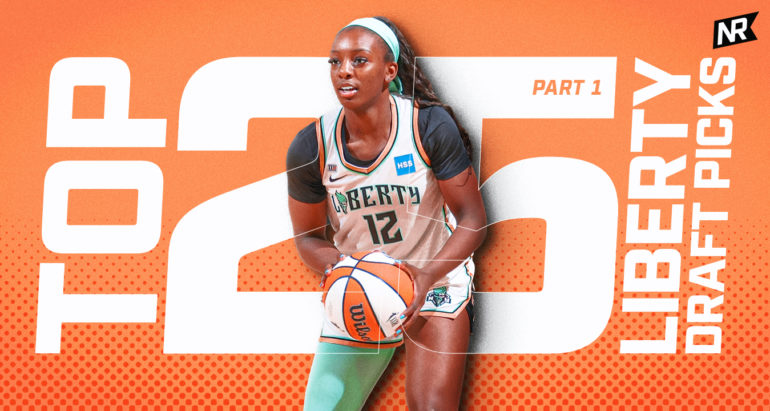 This five-part series will honor the history of the best draft picks in the Liberty’s 25 years in the WNBA.

In the first installment, I break down the 21st-25th best draft picks ever by the New York Liberty, each woman’s contribution to the Liberty during their tenure, and a “Where are they now?” follow-up for any retired player. The list will also include players from the 1997 Elite draft.

What went into these rankings? Overall statistics, number of games, and seasons with the Liberty, as well as any awards and playoff appearances. An athlete’s impact off the court with fans and their communities also entered into the consideration.

As a reminder, though likely considered some of the best ever to play for the Liberty, the following players were not drafted by New York. Rather, these players were acquired either through a trade or via free agency:

Kalana Greene was drafted 13th overall by New York in 2010. During her rookie campaign, she would average 4.5 points per game (PPG), 1.6 rebounds per game (RPG), and 0.9 assists per game (APG). Greene would be named to the All-Rookie team along with Tina Charles, Epiphany Prince, Monica Wright, and Kelsey Griffin.

Following her rookie season, the Liberty would trade Greene to the Connecticut Sun for guard Sydney Colson, where Greene would spend her next three seasons. In 2014, Green would join the Washington Mystics as a free agent for one season. In 2015, Greene’s final season, she would split her time with the San Antonio Stars and the Minnesota Lynx.

Drafted 14th overall in the 2008, Erlana Larkins’ rookie season saw her average 4.8 PPG and 2.7 RPG and while shooting 51.1 percent from the field. Her numbers would dip slightly in her second year, and she would put up just 2.1 PPG and 1.7 RPG. Combined, Larkins would play a total of 45 games with the Liberty during her two seasons. During training camp in 2010, the Liberty would waive Larkins to end her time in New York. She would miss the next two WNBA seasons before signing with the Indiana Fever in 2012.

That season, Larkins would go on to win a WNBA championship with the Fever, the first of her six seasons with the club. This included five straight playoff appearances and a return to the WNBA Finals in 2015. In 2018, Larkins signed with the Minnesota Lynx, playing her final 13 games. Despite receiving a contract from the Lynx for 2019, she would not see the court again. Larkins is now an assistant coach for North Carolina Central University women’s basketball team.

Kelsey Bone, out of Texas A&M, was the fifth pick in the 2013 draft. In her rookie season, she averaged 6.9 PPG and 5.4 RPG while starting a pair of contests. Her stats would earn her a spot on the All-Rookie team alongside Elena Delle Donne, Brittney Griner, Skylar Diggins-Smith and Alex Bentley. Following her rookie season, Bone would be traded on April 14 in what might well be the most important transaction in Liberty history. Bone—alongside Alyssa Thomas (the fourth overall pick in 2014) and Elizabeth Williams (the first overall pick in 2015)—headed to the Connecticut Sun in exchange for perennial All-Star Tina Charles. Bone would spend her next two seasons with Connecticut and earned an All-Star appearance in 2015, along with the Most Improved Player Award.

During her 2016 season in Connecticut, Bone was traded to the Phoenix Mercury in exchange for Courtney Williams, Jillian Alleyne, and the Mercury’s 2017 second round pick. After sitting out the 2017 WNBA season, Bone was dealt again in 2018, this time to the Las Vegas Aces in exchange for that year’s third round pick and a second in the following season. Her W career ended following the 2018 season, after the Aces’ bought out the remainder of her contract. Bone is still playing overseas and recently signed with Elitzur Holon in Israel.

In her rookie season, Asia Durr was a walking highlight reel. She average 9.7 PPG, 1.7 APG, and 1.6 RPG through 18 games while starting in 15 of them. After showing off gamebreaking speed in the open court, a groin injury on August 10 would prematurely end her rookie season. Following successful offseason hip surgery, Durr was poised to have a breakthrough season in 2020.

However, it was announced in June of 2020 that Durr had contracted the coronavirus and on July 7, the Liberty announced that due to lingering side-effects, Durr would be forced to medically opt-out for the 2020 “Wubble” season. Furthermore, for the 2021 season, Durr’s long-term issues of COVID-19 would persist and she would again be forced to miss the 2021 season. The Liberty suspended her contract on May 13 of this year.

Michaela Onyenwere was drafted sixth overall in the recent 2021 draft from UCLA. The late arrivals of Rebecca Allen and Natasha Howard, as well of the preseason injury of rising sophomore talent Jocelyn Willoughby, immediately pressed Onyenwere into starting duties. Through 21 games currently, she’s averaging 9.8 PPG and 2.9 RPG. An early frontrunner for Rookie of the Year, Onyenwere had a season high of 29 points and 39 minutes played on May 29 against the Atlanta Dream in an overtime loss. Additionally, Onyenwere has been named the Rookie of the Month in both May and June—the only two months the award has been handed out thus far this year. The Liberty’s 2021 season resumes on August 15 after the league’s break for the Olympics.

The next five players in the countdown will be revealed the week of August 16.