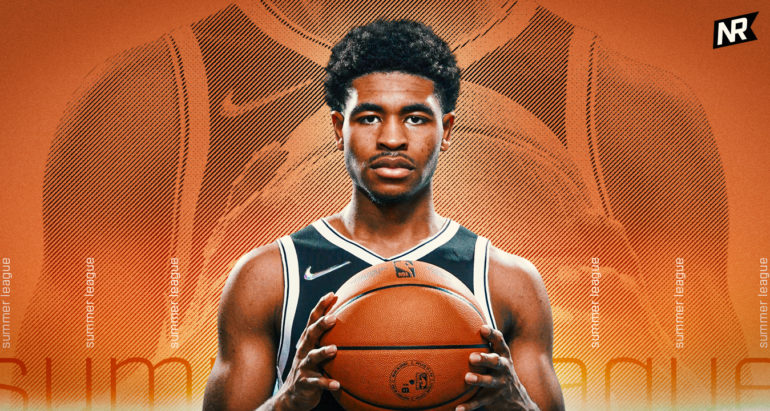 After their loss to the Memphis Grizzlies, the Brooklyn Nets won back-to-back games against the Milwaukee Bucks and Washington Wizards. The Nets hoped to continue their winning ways in the Las Vegas Summer League on Sunday against the San Antonio Spurs. Win again they did, as the Nets overcame a slow start to win 104-100.

The Nets fell into a 30-20 deficit in the first quarter, caused by poor shooting and four turnovers, coupled with the Spurs shooting 52 percent from the field. The second quarter quickly turned the game in their favor, as their aggressive drives to the basket opened multiple scoring opportunities. The Nets outscored the Spurs 28-23 in the second quarter, and headed into halftime down 53-48. In the second half, it became the Cam Thomas show. The Nets rookie scored 22 of his 36 points in the second half and hit the dagger in the clutch to seal the Nets victory.

Though game results do not necessarily matter in the long scheme of things, it’s still good for the players—and fans—to see wins. However, the most important aspect of Summer League is the development of the rookies, young players, and fringe roster players. Here are some takeaways from the Nets’ fourth Summer League game.

Cam Thomas is a Cold-Blooded Hooper

After seeing what rookie Cam Thomas has done during Summer League, teams might be kicking theirselves for possibly overthinking his NBA value. Touted as a possible lottery pick or top 20 draft selection, Thomas slid in the draft to the 27th pick to Brooklyn. And what a boon that pick was. After scoring performances of 19, 22, and 31 points, Thomas followed up by scoring 36 points. That 36-point total is also the most points scored in the Summer League since 2018. Overall, he is averaging 27 points per game during Summer League.

One thing to really take notice about Thomas is his aggression on offense. Even with a slow shooting start, Thomas was still able to finish the game shooting 11-of-25 overall and 3-of-6 from three. His aggression and confidence have allowed him to be a solid microwave scorer and provided a spark on offense that the Nets need. He capped off his performance by hitting a clutch, stepback three on the left wing to ice the game.

Once Thomas gets in rhythm, he can score on at will, and there’s nothing a defense can do but hope he misses. On top of this, Thomas being able to draw contact effectively on his drives to the paint is great to see.

A thought that should get Nets fans salivating is the untapped potential that can be unlocked when Thomas learns under Kyrie Irving, Kevin Durant, and James Harden, three of the most elite offensive players in the league. If Thomas can do this now, imagine his skill playing alongside—and learning under—them.

However, Thomas does need to work on his tunnel vision and passing. He only finished with one assist in Sunday’s game, and when he passes, it is usually on bailout passes if he can not score. These bailout passes can be errant or wild, and they led to his five turnovers.

The Nets’ Frontcourt Has Potential

The second first-round pick for the Nets, Day’Ron Sharpe, had another solid outing, finishing with 10 points and five rebounds. Sharpe’s energy has continued to be contagious, as on every play, he is seen hustling. Sharpe also gave us a sneak peak at some of his moves on offense. He was able to work the post with some spin moves, and a nice Euro step, to get to the basket for nice scoring opportunities.

There were a few drawbacks to Sharpe’s solid game on Sunday. On offense, Sharpe had a case of the butterfingers, as he had quite a few passes slip out of his hands, or he lost the handle on the ball on his way up to the basket. On defense, Sharpe is not as mobile as he needs to be to protect the paint. Also, Sharpe needs to learn how to defend without fouling.

A member of last season’s roster, but whose spot is unguaranteed due to the nature of his contract, is forward Alize Johnson. After a rough first game, Johnson has continued to prove that he should deserve a roster spot with the Brooklyn Nets. Johnson was a big contributor in the Nets’ victory, adding 13 points and 14 rebounds to the stat sheet. He provided his usual hustle, which contributed to his putbacks on the offensive end and rebounding on the defensive end. He continued to display his skills on defense, showing that he is switchable and can defend multiple positions on the floor.

Outside of the Nets’ main 15 on the roster, there is only room for two-way contracts. There is a good debate for who deserves those spots.

An early fan favorite for a two-way spot is guard David Duke Jr. The Providence product continued his impressive Summer League with a performance of 11 points and six rebounds. Duke Jr. is a smart player, and his ability to drive into the paint and open the floor for kick-out opportunities is good to see, and should be useful for Brooklyn. He is also a quick and solid perimeter defender, and has shown to be a pest on the defensive end. For a Nets team that struggled on the defensive end on the floor last season, Duke’s defensive skills could also be a big reason why he gets a two-way contract if Sean Marks offers it.

Forward Kessler Edwards has also been an intriguing choice for a two-way spot. A 3-and-D prospect out of Pepperdine, many thought Edwards could become a key rotation player for Brooklyn. So far, Edwards has struggled hitting from downtown, but has still been a productive contributor during Summer League. Edwards has continuously hustled on both ends of the floor. His perimeter defense has been impressive, putting clamps on the opposing team’s best player. He has solid lateral quickness, and is switchable to guard multiple positions. If Edwards is able to carry over his 40 percent shooting from Pepperdine to the NBA, he should be a contributor for years to come.

After getting a more extended run in his second game, guard Marcus Zegarowski has shown that he is also deserving of a two-way spot. Zegarowski sparked the Nets’ comeback by draining a straight-on pull-up three-pointer on his first shot of the game. Zegarowski finished 12 points on 5-of-8 shooting, while going 2-of-3 from downtown. He has shown that he too can be a microwave scorer. Zegarowski has also played solid defense against opposing guards.

The Nets have tough choices to make for their two-way spots, which is a good problem to have. Whoever is selected for those contracts can be seen as possible spot contributors and/or collect garbage time minutes as part of the infamous “stay ready group.” And for those who do not make the cut, developing in the G League should be a boon for the Nets, who will need to retool with young talent during their title window.

Veteran Help Will Not Be Found at Summer League

The Nets have employed NBA and G League veterans on their roster this year in hunt for more veteran help for a title-contending team. Notably, there’s Brandon Knight. Knight, who has been trying to make his comeback in the league, has not impressed. Knight had another meager outing, scoring only two points on 20 percent shooting, and had more fouls than points. If Knight is going to make his comeback, it probably will not be in Brooklyn.

Jordan Bowden, who played for the Long Island Nets last season, might find himself in Long Island again. Though he poured in 14 points, he had an inefficient outing, shooting 25 percent from three. Bowden did provide solid defense, but it feels like a long shot for him to make the main roster.

One player that seems to be completely out of the rotation could be center Reggie Perry. After the news broke that the Nets rescinded their qualifying offer to Perry, he became a DNP for this game. By being out of the rotation during Summer League and having his qualifying offer rescinded, we might have seen the end of Reggie Perry as a Brooklyn Net.

The Nets will wrap up their Summer League by playing the Toronto Raptors on Tuesday, August 17 at 5:30 EST, broadcasted on NBATV. Brooklyn will hope to finish the summer strong with a victory and finishing 4-1.