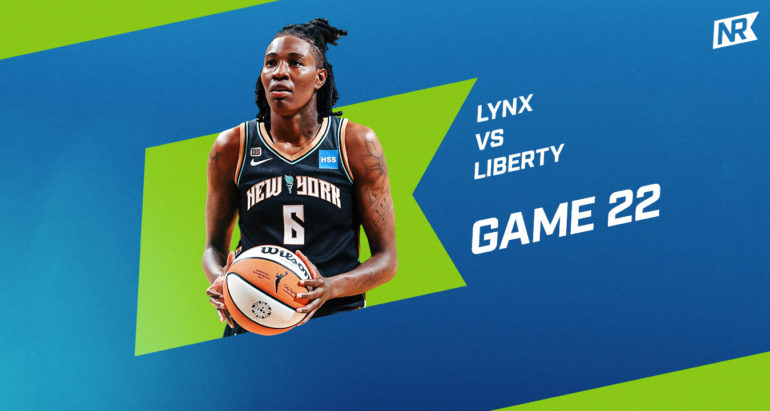 The WNBA and the New York Liberty returned to action on Sunday after a five week hiatus due to the Tokyo Olympics. But with the Minnesota Lynx returning to action on a seven-game winning streak, winning this one was going to be a tough ask for the Liberty.

For the first time since May 24, Natasha Howard was cleared to play for the New York Liberty. Per head coach Walt Hopkins’ media availability prior to the game, Howard was on a “loose” minutes restriction.

Not only would Howard be available to play, but she would be inserted into the starting line-up as well.

The overall physicality of the game was set early on. The Liberty would only go to the free-throw line a total of 11 times. Meanwhile, the Lynx would feed off of New York’s 20 fouls and head to the line to shoot 18-for-21 from the charity stripe. The domination inside by Sylvia Fowles was too much for the smaller Liberty to defend. Fowles would score 12 points in the first quarter alone and would finish the half with 14 points and 7 rebounds. Furthermore, Napheesa Collier would prove just as formidable alongside Fowles. Considered more of a stretch power forward, Collier took advantage inside and would finish the game with 18 points, ten rebounds, four assists, and five blocks. The shorter Liberty were mismatched inside.

The addition of Natasha Howard kept the Liberty close throughout the first half and would trail the Lynx by only four. A 9-0 run to start the second quarter was key to keeping pace with Minnesota.

Heading into the third quarter, the Liberty would exchange leads with the Lynx in a back-and-forth battle. The Ionescu-Howard pick-and-roll connection was a combination usually seen by a pair of veterans. And yet, this was only their third game together. A solid end to the third quarter that was finished off by an Ionescu block would give the Liberty the lead, 65-64.

With Rebecca Allen still seeming jet-lagged and Michaela Onyenwere in foul trouble, the Liberty would use a guard heavy line-up for the majority of the second half. Frequently, the defensive combination of Jazmine Jones and DiDi Richards would be paired to slow down the uptempo Lynx. Despite the back-and-forth game, the Lynx would go on an 18-8 run in the fourth quarter and would never lose their lead. A pair of three-pointers late in the game would cut the Lynx’s lead down to six, but the Liberty couldn’t catch up. A poor showing in the fourth quarter led the Lynx to outscore them 24-13 overall. Minnesota now had their eighth straight win and would improve to 13-7 and remain in fourth place.

The uncertainty of her minutes restriction was unknown coming into the team’s return. Deemed as only at 80 percent, not too much was to be expected from Howard in her return. What was a sure thing was the chemistry between her and Sabrina Ionescu. Would Howard be rusty in her return?

From the beginning, Howard scored the first two baskets for New York. Her first bucket would be on an assist from Ionescu through a classic pick-and-roll play. Howard would dominate that stat line for New York, scoring 20 points on 8-13 shooting in the first half. Minutes restriction? Howard would play 15 minutes in each half and finished with 30 points and four rebounds while shooting 59 percent from the field.

Howard’s minutes restriction didn’t seem all restrictive tonight. However, with Sylvia Fowles and Napheesa Collier dominating inside, Hopkins decided to play small ball for the majority of the night. Rebecca Allen didn’t provide anything in her four minutes of play. Allen, coming off of playing for the Australian National team, was the only Liberty player who played in the Olympics.

Meanwhile, Onyenwere’s early foul trouble resulted in coach Hopkins going small with four guards in the second quarter. A combination of Didi Richards and Jazmine Jones together enabled the Liberty to keep pace with Minnesota for the majority of the game. Both would play 18 minutes on the night. Defensively, New York would gather nine steals for the game (three by Sami Whitcomb). With Howard playing so well in her return, both Kylee Shook and Reshanda Gray saw limited minutes. Instead, Betnijah Laney or Richards would get the assignment to guard Collier or Dantas on the inside.

The Liberty came into tonight’s game averaging a league-worst 17 turnovers per game. A recurring issue in many of their previous losses was a constant thorn for Hopkins. However, tonight’s efforts would change that, with just three turnovers in the first half and nine total on the night. No player had more than two turnovers.

Despite their loss, the Liberty would remain in seventh place after all twelve teams played in the league’s return to action. Losses by the Mystics, Dream, Wings and Fever would keep the Liberty a game ahead of the ninth-place Dallas Wings. With ten games remaining on their schedule, every game here on out is critical for the Liberty. New York hasn’t qualified for the playoffs since 2017.

UP NEXT: The Liberty return to Barclays on Wednesday to face the Seattle Storm at 7:00pm. The game will be televised on CBS Sports Network and the YES App.