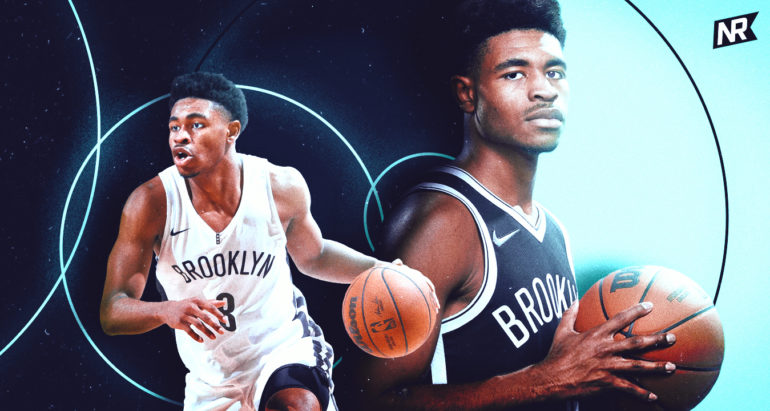 Cam Thomas, Killa Cam, Chef Cam, Clutch Cam—whatever you want to call him, the 19-year old is an absolute talent. The joint winner of the Summer League MVP didn’t just have a great Summer League in the context of this year’s outing; he was historically great.

The 27th pick in the 2021 draft exceeded his worth as a late first-round pick. The question marks around his shot selection and attitude were put to bed with performances that Nets fans won’t soon forget. He finished his four games with averages of 27 points, 1.8 rebounds, 2 assists and 1.3 steals on 42.3 percent shooting from the field and 36 percent from three. He also took an astonishing 9.8 free throws per game, hitting 85 percent of them. As a reference, James Harden averaged 7.3 free-throw attempts per contest as a Brooklyn Net last season.

Thomas made a statement in his four games in Vegas. The question is though, will it be enough to get consistent minutes with the regular season squad? Let’s look at what will allow him to genuinely make an impact with the 2021-22 Brooklyn Nets.

Do What He Does Best

Cam Thomas is a flat out scorer. He does it at every level. This includes showcasing his lethal footwork with the unguardable, Harden-esque sidestep three.

He even tops that, by drawing the foul on a four-point play.

The analytics brigade may not love it, but the bag for Chef Cam extends to the mid-range.

Thomas has an innate scoring nous that few players have, let alone rookies. Self-creation is the skill that is most valuable at the highest level in a league skewing more toward offense by the season. Killa Cam can create for himself in spades.

Then there’s just the simply unbelievable.

The LSU guard knows how to put the ball in the basket. If there is space on the floor, he will find it. He’s a young man who isn’t overawed by the moment, and when the occasion calls for it, you’d be very comfortable with the ball being in his hands.

Footwork, game sense, and an unwavering ability to score are just some of the ways he can force Steve Nash’s hand, and give the rookie on-court time.

Getting to the Charity Stripe

Thomas is a three-level scorer. The mid-ranger is on point and the perimeter shot is equally lethal, but even more impressive is his ability to get to the free-throw line. He took 39 free throws across the four games, thanks to savviness like this:

Thomas shows a great awareness here off the Sharpe screen and handoff. He immediately puts the defender in an awkward position, and he knows it. He essentially lures the Spurs defender into the foul the moment he has the step on him, as he decelerates to draw the contact.

When you look at the guards who averaged the most free throws last season, you think about how they accumulate those numbers. The video above is something that Trae Young did a million times last season, while Thomas’s idol and new teammate, James Harden, would be proud of his skill in drawing contact at a variety of levels. Additionally, all of the players listed are some of the league’s best scorers, which only bodes well for Thomas and his future in the NBA.

A lot of criticism around Thomas is that he has tunnel vision. He hunts his own shot too much while ignoring and discounting his teammates. At Summer League, he eased some of those criticisms with some nice reads.

He draws the second defender, leaving the big man open down low for a simple pass, leading to the basket. It’s not an eye-popping play by any stretch, though it shows that he can make the requisite reads and find his teammates in solid positions.

Another similar play is the one he executed with fellow rookie, Day’Ron Sharpe.

It’s a harder pass considering he’s off balance, but it’s a good decision implemented with some distress.  When the right pass is there and a teammate is open, Thomas will make the right read.

His offensive gravity can benefit his teammates and lead to easy buckets in advantageous positions. The most promising assist he had at Summer League was one with quite a level of difficulty.

The defense forces him out of bounds, but he times and weighs the bounce pass perfectly, making the hard look easy.

Thomas’s passing isn’t going to light the world on fire, but if he can continue to utilize his gravity to open space for his teammates and then execute the right pass at the right time, it’ll go a long way to earning minutes.

Catch and Shoot Threes and Playing off the Ball

Here are the following field goal attempt averages from last season for the Nets’ big three:

The trio combined for just shy of 54 shots per contest. As a team, Brooklyn averaged 87.3 field goal attempts a game last season. There’s not a lot of shots to go around, especially if you’re a rookie who has to fit into a team with championship aspirations.

The shots most likely to be available to Thomas will be catch-and-shoot opportunities, and shots attacking off the catch. The good sign is that if that’s all that is available, Thomas can still be an effective player.

Thomas showed some abilities going downhill off the pass that will bode well for him playing a secondary role on the Nets.

He has good composure, a really strong handle, and quality finishing abilities. You can easily see Brandon Knight being replaced by James Harden in this situation.

And he can finish with both hands.

His mechanics off catch-and-shoot opportunities are very smooth and fluid.

His off-ball movement is eerily reminiscent of new teammate Patty Mills and would make the Aussie superstar proud. These looks will be available to him consistently in a team where the gravity will be dominated by the experienced superstars.

It won’t be easy for Killa Cam to crack the rotation with this stacked Nets team. Steve Nash has made it known that he will certainly have to earn his opportunity. With the NBA going back to an 82-game season, combined with the likely load management that’s going to happen across the board, don’t be surprised if we see Chef Cam cook something up for Nets fans throughout the year.