The Brooklyn Nets are back in the NBA Playoffs for the first time since 2015. After three straight seasons with under 30 wins, the Nets finished 42-40 on the year and head into the postseason as the sixth seed in the Eastern Conference. They’ll be facing the third-seeded Philadelphia 76ers, who went 51-31 on the season.

Because the teams play in the same division, they’ve already met four times this season, with the teams splitting those meetings. Theoretically, that sounds like good news for the Nets — they scored 120+ points in three of those meetings and showed they had what it took to outscore a potent Sixers offense, but…let’s reality check for a minute here. The Nets were 0-1 against the version of the 76ers that they’ll be seeing in the postseason, the version with Tobias Harris at the four and Mike Scott and Boban Marjanovic coming off the bench. That game was Brooklyn’s worst in terms of offense of the four games as they scored 110 points; not bad, but not at the same level they’d been reaching against a Sixers team that’s struggled at times defensively.

Let’s look at this playoff series from a few different vantages.

What Can We Learn From That March 28th Meeting?

One game is obviously not enough for us to draw any huge amounts of information from…but let’s try anyway!

The Sixers won that game 123-110. Rotation-wise, the teams looked a lot like they’ll look this series. Of the players to play key minutes, the only ones we won’t see in this series will be Philadelphia guard Shake Milton, who was on a two-way deal and isn’t playoff eligible, and potentially Joel Embiid if his lingering knee injury keeps him out of this game. The Sixers also will have two guys who didn’t play in that game, Zhaire Smith and Jonah Bolden, which means that if Embiid is able to go, Philadelphia might be fielding a stronger team than the one that already beat the Nets. Yikes!

The Sixers won three of the Four Factors in that game. (If you aren’t familiar with Four Factors, Dean Oliver says that shooting, turnovers, rebounding, and free throws are the most important factors to winning games, and that’s been extrapolated into some metrics.) Here’s how that looked, per Basketball Reference:

One big problem in this game for the Nets was Joel Embiid. The center finished with 39 points and 13 rebounds and had a shot chart that looked like this: 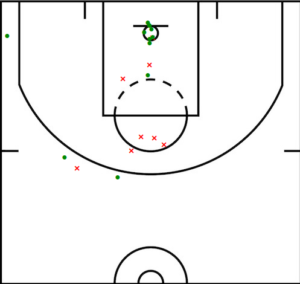 Forcing Embiid to shoot from the key looked like it could be a good strategy when the teams face again, but letting him be unstoppable under the basket and hit three of his four shots from deep isn’t the way to win games.

Jimmy Butler and Tobias Harris combined for just 15 points on 6-for-18 shooting, though, as the Nets figured out some ways to limit them. That’ll be key in this series. But also key will be getting the kind of production from D’Angelo Russell and Spencer Dinwiddie that existed in earlier meetings and didn’t in this one. The Sixers don’t boast a great perimeter defense, so Dinwiddie attacking the basket is one key to getting things going. Exploiting whatever player gets to go against JJ Redick is important.

And, of course, just finding a way to stop Embiid is important. If he scores 39 points and doesn’t miss a single shot at the rim, you’re going to lose.

Let’s Talk About The Sixers

Liberty Ballers writer Adam Aaronson put together a great guide to this series from the Sixers perspective, and I want to cite a few things he brought up. His words are in italics; mine aren’t.

Zhaire Smith should absolutely play in this series.

This is true. The Sixers have a lot of issues with wing/guard depth, but the rookie Smith — who suffered a pretty serious allergic reaction in the year and looked like he wouldn’t see the floor this season — provides them with something they didn’t really have all year, or at least not since before they started trading for stars: a bench wing who can play defense. Being able to bring in Smith and put him on either Russell or Dinwiddie or LeVert is going to be a key to the Sixers stopping Brooklyn, and the recent development of Smith being good should be something worrisome for Nets fans.

In his last 15 games, [Tobias] Harris is shooting 4.3 three-point attempts per game and only making 24.6 percent of them. His total three-point percentage with the Sixers is down to a lowly 32.6 percent.

The Sixers are a team’s that pretty heavily reliant on their starting five, so it’s not a great sign for them that Tobias Harris has struggled from long range lately, especially when you consider that this team really needs shooters to balance out the non-shooting of Ben Simmons and the expected playoff regression of notable playoff underperformer JJ Redick. Against a Nets team that held opponents to the league’s third-worst three-point field goal percentage this past season, the task of keeping those guys struggling seems…doable, kind of!

So, Who Will Brooklyn Play?

Playoff rotations always get smaller, but “small rotation” is definitely not a thing the Nets do much. What can we expect to see?

Here’s my projected starting five in this series:

Other than that, we can obviously expect Spencer Dinwiddie and Caris LeVert in the backcourt. We can expect to see Ed Davis as the backup center. That gives us eight players, which some teams would look at and say “yeah, this is our playoff rotation.”

I can’t imagine Kenny Atkinson doing that, though.

My best guesses for who else we see: Rondae Hollis-Jefferson as a small-ball five for some stretches, Jared Dudley to provide a bench catch-and-shoot option, and…well, I’d hope that’s it. Treveon Graham looked good at times this season, but I don’t see him having a role in this series. Everyone likes the upside of Dzanan Musa, but this isn’t the time to use him. Shabazz Napier can be an emergency third/fourth point guard, but I don’t think we’ll see him much. Theo Pinson was just signed to a real, not two-way deal, but he shouldn’t be more than depth.

Over on Twitter, I asked if anyone had questions about the series. Here are some I got:

Would it be worth playing Ed Davis and Jarrett Allen together if they are not in foul trouble to combat Sixers' bigs?

I don’t think so. The Sixers use stretch guys at the four — usually Tobias Harris or Mike Scott or Jonah Bolden — and I think using a smaller guy who can go out and defend them works better than trying to use Allen and Davis together. The closest the Sixers will get to use two “real” bigs will be if we see Embiid or Marjanovic or Amir Johnson at the five and Jonah Bolden at the four, but even then…Bolden’s technically plays the five, but he’s such a non-traditional center that I don’t think this is the time to experiment with any Davis/Allen moments. Those two shared the floor for just seven defensive possessions this season and no offensive possessions. This just isn’t the moment to try this.

How will DLo do in his first playoff appearance? Thrive or crumble?

I think he’ll be fine. There’s a good article from The Ringer from last season about playoff shooting with some interesting results:

What’s interesting? That shooting numbers fall, but not, like, super significantly. I don’t expect Russell’s shooting numbers to decline in the playoffs, and I don’t really buy into most of these narratives about “the moment being too big” for players in their first playoff appearances. Maybe he’ll be slow to get going on Saturday, but…ehh, not something that makes me lose sleep.

Now, if “thrive” is taken to mean “play even better in the postseason,” that’s where I’d slow down and say “let’s wait a minute.” Russell’s shot profile — threes, mid-range pull-ups, floaters in the lane — doesn’t really seem like the kind of shot profile that screams “THIS GUY IS GOING TO LEAD US TO THE UPSET” or anything. Finishing at the hoop is a really important part of playoff basketball.

What Does Brooklyn Need To Do To Get The Upset?

Let’s break this down into two categories.

If that Embiid knee issue is really a problem, the Nets have a chance. Philadelphia will start Jonah Bolden at the five and use Boban Marjanovic as the primary backup, which means the combination of Jarrett Allen and Ed Davis should be able to make things happen inside.

I know people have conflicting thoughts on Jarrett Allen, but per Synergy, he finished in the 66th percentile as the roller in pick-and-rolls, and he ranked in the 81st percentile in transition scoring, so he’s got some strengths that line up well with things like Bolden being just an average transition defender and Boban ranking in the 38th percentile at defending the big in pick-and-rolls since he came to Philly. Whereas you fear having Allen deal with Embiid, the assortment of backup bigs in Philly don’t offer the same resistance as Embiid.

Other than that, the things the Sixers need to do to win look a lot like they’d look in a series with Embiid present, which is…

Am I optimistic about the Nets chances of winning? No. If I had to make a prediction with the assumption that Embiid misses none or, maybe, one game, I’d go Sixers in five or six. But anything can happen in the NBA, and this is what I see Brooklyn needing to do:

That’s a pretty long list of things, and again…I don’t see a victory being likely here. The Sixers starting five is really, really good — they’ve got a net rating of 17.6, while the projected Nets lineup of Allen/Kurucs/Carroll/Harris/Russell has a net rating of -5.8. I don’t have any way of painting that in a positive light, though subbing Kurucs out for Dinwiddie does result in a lineup with a net rating of 20. It’s only played 62 minutes, though, so I don’t know how much we can really draw from that.