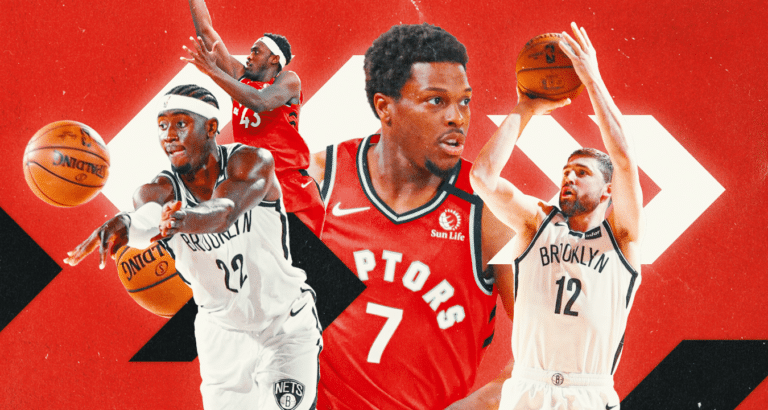 The Raptors have built a defensive identity where they can easily plug-and-play newcomers like ex-Net Rondae Hollis-Jefferson, with a “next man up” offensive mentality that has conjured up breakout years from former G-Leaguers such as guard Fred VanVleet and forward Pascal Siakam.

On the other hand, our beloved Bubble Nets are slowly but surely discovering their own identity as giant slayers. Caris LeVert has arrived on the scene as a 26-point scorer, Joe Harris is –– stop me if you’ve heard this before –– more than a shooter, Jarrett Allen is becoming a dominant paint protector on one end of the floor and an interior finisher on the other. Head Coach Jacque Vaughn is proving he is an interim only in title, and a bench full of reclamation projects are making their names known during the Orlando restart.

With all this being said, beating the Toronto Raptors is easier said than done, after all. Let’s take a look at what the Nets are going to have to do if they want a shot at poking the bear. Just remember; this fun, young, upstart thrown together squad has their work cut out for them, and are going to have to perform above expectations.

Keys to Victory for Brooklyn

This season, the Toronto Raptors recorded the second-best defense in the league, limiting opponents to 104.9 points per 100 possessions. Unlike stellar defenses in years past, the Raptors not only allow their competition to attempt the most three-point shots in the league, but they allow the most corner threes as well, according to Cleaning The Glass.

At first, this strategy might seem unorthodox seeing as the corner three is widely considered the most valuable shot on the basketball court, when considering its value and distance from the rim. However, the Raptors are incredibly decisive about what sorts of threes they allow.

The Nets are doing to have to punish the Raptors for leaving them open in the corner, and they have the personnel to do so. The sharpshooting Virginia product Joe Harris is in the 92nd percentile of corner shooters at his position, but he doesn’t take many. Enter Timothe Luwawu-Cabbarot, an absolute sniper from the corner. He ranks above the 85th percentile in corner threes in both makes and attempts and will prove to be a vital cog in Brooklyn’s offense.

Led by the best coach in the NBA (yeah, I said it), the Raptors present a formidable defense. They’re active, every player is on the same page, and they’re long…extremely long. Siakam has a wingspan of 7-feet, 2-inches, both Boucher’s and Gasol’s are 7-feet, 4-inches, and Ibaka is right between them at 7-feet, 3-inches.

Toronto absolutely loves to crowd ball handlers, and that’ll be an issue for Brooklyn. They can mitigate the damage by keeping the ball moving and making quick decisions on the catch, keeping the Raptors defenders flying around the hardwood and out of position. Luckily, the Nets have been playing incredibly small lineups, with no player taller than 6′ 9″ on the roster (other than Jarrett Allen), and have shown that having ball handlers at every position is a real strength. Even Allen has shown tremendous flashes on the short roll distributing to shooters.

These Jacque Vaughn-led Bubble Nets seem to be much more inclined passers than the previous iteration of this team earlier in the season who averaged an unimpressive 277 passes per game, ranking them 25th out of 30 teams. However, during the restart the Nets’ per-game passes have increased to an average of 299 passes per game, slotting them at 8th in the NBA.

Toronto’s offense is far from perfect, and that’s the only real liability the Nets have at their disposal. During the 8 seeding games, the Nets were off to a blazing hot start, recording an offensive rating (points scored per 100 possessions) of 116.2. Compared to a putrid 106.9 for Toronto in the bubble and their 110.8 ranking on the season, the Nets will have to continue to limit Toronto’s offense in order to overcome the undeniable gap in skill and talent on the other end of the floor.

When taking a look at Toronto’s shot diet, it’s a healthy serving of three-pointers all around the arc and a stuffing of rim attempts, third most in the league for the latter. Toronto attempts very little mid range shots, an interesting anecdote considering their star Pascal Siakam loves that area of the floor.

Even though they rank 3rd in the league in attempts, the raptors shoot a down embarrassing percentage at the rim – 61.2% – slotting them 20th in the league. The Nets need to amplify their opponent’s weakness by running Toronto off the arc and into the paint where they’ll meet the staunch rim protector Jarrett Allen, and that 61% will presumably drop even lower to pitiful depths.

What To Look Out For:

Joe Harris is off to a scorching hot performance in the bubble and is once again proving to the world he is much more than a three-point shooter. Under Vaughn’s new offense, Harris has newfound freedom to launch away from mid-range, a forbidden zone under the eye of Kenny Atkinson.

Filling in for others who opted-out of the the Orlando restart, Harris is averaging over 20 points and shooting over 50% from downtown. However, many fans seem to have forgotten Harris absolute stinker in the playoffs last year, where he was invisible in the first round against Philadelphia.

In a five-game series loss to the Sixers, Harris clocked in with a measly stat line of 8.8 points on 19% from distance and a dreadful plus/minus of -14. This isn’t uncommon in the postseason when opposing defenses will lock in on shooters that may have experienced more freedom during the first 82 games. However, on wide open attempts (6 feet or more of space) he still only converted on 20% of attempts, per NBA Stats. That’s downright unacceptable in the playoffs.

If Harris shows once again this postseason that the bright lights of the NBA playoffs prove too much for him to shoot to the standard that he has set for himself, owner Joe Tsai and GM Sean Marks could conceivably have some real decisions to make about Harris’ future as a Net moving forward.

Ever since Kenny Atkinson’s controversial departure on March 7th, his replacement – Jacque Vaughn has been compared to him in every facet of coaching possible. From his demeanor on the bench to his timely timeouts, his rotations, his scheme, his off-court impact on the organization, his connections with the players both star and otherwise… the former Net guard has seen it all in his very short stint as the head man in Brooklyn.

The presumptive runner-up to the new “Coach of the seeding games” award, Vaughn led this young upstart Nets team to an unimaginable 5-3 record, taking down powerhouse contenders such as the Los Angeles Clippers and the Milwaukee Bucks.

He’s been praised across the board for giving players freedom and not hesitating to drastically change the game plan mid game, a breath of fresh air for many after the rigidness of the last coaching regime, even if many of the faces on the bench are still familiar.

Funnily enough, Vaughn’s opposition – Nick Nurse – has been celebrated for many of the same traits, systemically altering a team’s defensive philosophies on a game-by-game based on the opponent. I wouldn’t expect anything less in this first round series, and Vaughn will have to keep Nurse and company on their toes the entire time.

As previously noted, it is imperative for the Nets to keep Jarrett Allen in the paint as much as they can in order for the Raptors to struggle at the rim like they have all season. However, the Raptors bigs are all solid shooters from deep, which could cause an internal struggle for Allen’s pick and roll coverage. Serge Ibaka shoots 38% from distance, Gasol is up to 39% from being the arc, and Boucher is still respectable at 32% percent.

Luckily for Nets fans, the otherwise struggling defensive team played Center JaMychal Green — who is shooting over 50% from downtown in the bubble — tremendously in their matchup against the Clippers. In both clips, the Nets employ a late switch to force the ball out of two dangerous ball handlers Kawhi Leonard and Lou Williams and are able to recover well to not give offense any real mismatches.

Coming off of a season headlined by winning the Most Improved Player award and an NBA Championship, Pascal Siakam was swiftly promoted into the role of being “the guy” for the Raptors. Losing Leonard was difficult for the North, and replacing his production was going be done as a collective. Still, Siakam shone above the rest. He increased his scoring average by 6 points, but his field goal percentage dropped by almost 10 percentage points.

After a blisteringly hot start to the regular season in late 2019 in which the Cameroonian forward received MIP buzz once again, Siakam cooled back down to earth after the start of the new calendar year. He finished out the year with a stat line of 26 points, seven rebounds, and three assists.

For one reason or another, the bubble experience for Siakam has been day and night compared to his pre-hiatus play. His efficiency plummeted to under 40 percent shooting from the field, and his scoring numbers have suffered across the board.

As for his upcoming matchup with the Nets, Siakam loves to shoot from 4-14 are, especially on the low block. Brooklyn will give him the go-ahead from there, seeing as their defense in the bubble has been focused in other areas on the floor. Unfortunately for Spicy P, he’s only in the 39th percentile of shooters from that area.

As LeVert watched teammate after teammate opt-out of the bubble, he knew it was his time to shine. Caris has shown flashes of All-Star level brilliance numerous times in his career but has been limited due to injury ever since his days at Michigan. Before the NBA season was put on hiatus, LeVert had just erupted for his first career triple-double against the San Antonio Spurs and dropped a 50-bomb in TD Garden. The Celtics didn’t know what hit them.

Now, even casual fans around the league know the bomb of a basketball player that is Caris LeVert, solidifying his stardom with a second team All-NBA award for the bubble seeding games. The Nets offensive game plan starts and ends with Levert, who has seen his assist number skyrocket to seven per game and a usage rate increase to 32 percent.

It was a night to remember for @CarisLeVert.

Now, “Baby Durant” will have his work cut out for him against Toronto. As the lead pick and roll man, LeVert will be forced to keep the ball moving when help arrives The Raptors have taken away the short midrange in the bubble so he’ll be forced to keep the ball moving and trust in his teammates. Yes, the ball could find its way back in his hands for a catch-and-shoot jump shot, but LeVert has struggled on those all year, connecting in the low thirties of percentage all year. After offering LeVert’s favorite shot on a gold platter to opponents all year (the short, free throw-line mid-range), the Raptors have clamped down in the bubble, so no even Caris knows what to expect.

Although I do think there is upset potential for the Nets to dethrone the reigning champs, it’s rare a 2-seeded team like these Raptors are taken out so early in their playoff run. In an unpredictable environment like the NBA restart, anything is possible, so I would be remiss to not even give Brooklyn a chance. All in all, I’m predicting Toronto wraps up this series in 5 games.