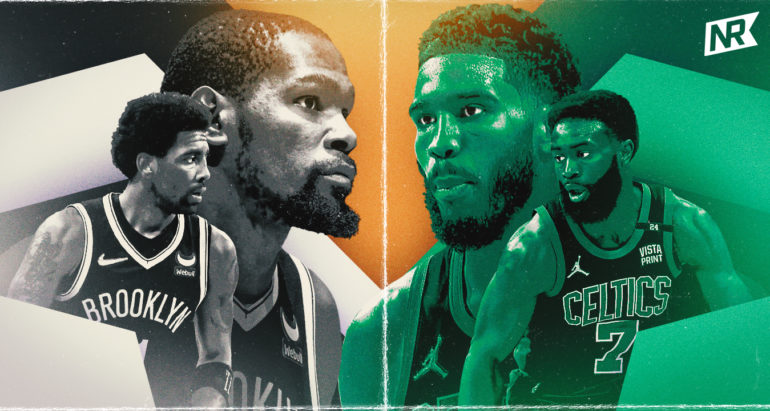 Nets vs. Celtics Playoffs Preview: The Keys to Brooklyn Taking Down Mighty Boston

The Brooklyn Nets have finally arrived in the playoffs. After a trying season filled with injuries, disengaged players and lineup confusion, the Nets officially locked up the seventh seed on Tuesday night.

However, the focus now quickly shifts to Boston, where the Nets will face off against the No. 2-seeded Celtics. During the year, Boston won the regular-season series 3-1; Brooklyn won the first matchup, but proceeded to drop three straight the rest of the way. Granted, during two of those games, both Kevin Durant and Kyrie Irving were not available. In the primetime March showdown between the two teams, Jayson Tatum’s 50-piece lifted Boston despite Durant’s best efforts.

Heading into the first round, there are several things that need to happen for Brooklyn to take control. The Celtics are a dangerous squad, especially with Tatum and Jaylen Brown’s elevated performances. Let’s take a look at some of the keys to success and what they mean for the Nets moving forward.

Superstars: Can Irving and Durant Fuel the Team?

Clearly, the Nets’ success runs through Kevin Durant and Kyrie Irving. The team is built around its superstars, which is by no means a bad thing. However, both Irving and Durant are responsible to get the team fully involved across the board. We have seen the duo accomplish this before, with the most recent example taking place on Tuesday night. The two combined for 23 assists against the Cavaliers, dicing up Cleveland’s defense throughout the night.

It is expected for Irving and Durant to keep up their scoring against Boston. What will be required, though, is ensuring that the duo finds a rhythm early on when it comes to playmaking. While Durant and Irving can beat just about anybody, the Nets cannot rely on those two solely over a potential seven-game series. Other important members of the team have to make an impact on both ends of the floor. Durant and Irving will see plenty of double teams, so it is imperative that they find the open man. Of course, Durant and Irving will serve as the two main closers down the stretch, but Brooklyn’s coaching staff must create ways for others to stay engaged throughout the course of the series.

Ever since the blockbuster trade went down with Philadelphia, Bruce Brown has been sensational. The guard-turned-forward has been playing the best basketball of his career, at the right time for the Nets. He plays such a unique role, acting as a facilitator and scorer depending on what the team needs.

Brown’s overall level of play might just decide how this series goes. His recent decision-making has been exceptional, helping alleviate some of Durant’s pressure when double-teamed. In both recent games against Cleveland, Brown was outstanding in his role, splitting double teams while simultaneously making the right play. When both Brown and Nic Claxton are on the floor, Brooklyn’s scoring in the paint improves dramatically. There is no doubt about it: Bruce is vital to winning this series against Boston.

Two guys to keep a close eye on are Seth Curry and Patty Mills. Both have had their ups and downs this season, but the shooters are crucial to the Nets’ success. Curry, in particular, has been a wonderful addition to the starting lineup. His accuracy and underrated scoring abilities have made him into a valuable weapon for both Durant and Irving. Not to mention, his chemistry with Andre Drummond has also provided the team with a much-needed boost on both ends of the floor. If Curry can consistently score from the perimeter, life becomes much easier for the Nets across the board.

Meanwhile, Patty Mills can be the difference between wins and losses in this series. After an incredible start to the year, Mills fell into an elongated slump. If Mills can’t perform at a high level, the Nets are going to struggle to find energy from their bench players. That being said, Mills has proven himself in the playoffs multiple times with San Antonio, and the same can be said this year with Brooklyn. The past couple of weeks have treated Mills better, he just needs that positive momentum to carry over into the postseason.

Brooklyn’s big men have an opportunity to dominate in the paint, considering Boston is missing their starting center in Robert Williams III at least for the start of the series. While he is out recovering from meniscus surgery, both Andre Drummond and Nic Claxton should have more freedom in the post. Drummond has been incredible for Brooklyn since the trade with his size and rebounding abilities providing the Nets with multiple second-chance opportunities, something they’ve desperately needed. Against Boston, Drummond has to focus on being a rebounder first, alongside cleaning up at the rim. If he does those two things well, the rest will follow.

Claxton has seen tremendous growth this season, combining with Drummond as a powerful one-two punch at the center position. His aggressiveness is something Brooklyn values greatly. Not to mention, Claxton can guard multiple positions at a high level, making him an elite switch defender. Considering Brooklyn does switch relatively often, Claxton will likely play a big role in this series guarding stars such as Tatum and Brown. Brooklyn should also continue to run pick-and-roll actions with Claxton, as he has improved his finishing at the rim. If Claxton and Drummond can continue to build chemistry throughout the playoffs, the Nets will be in solid shape at the center position.

The Ben Simmons saga has been quite interesting, to say the least. The star defensive player still has not played in a game for Brooklyn as he has dealt with back issues since the trade went down. However, it does appear as if Simmons will be available to play at some point in the postseason. Shams Charania reported on Thursday that the Nets are currently aiming for a return late in the series.

There have been plenty of storylines about Simmons since he came to Brooklyn, but if he can hit the court against Boston at some point, that will greatly affect how the series pans out. Simmons is an elite defender and has proven himself to be a quality playmaker at the same time. Surrounded by the likes of Durant, Irving and Curry, there is no telling of what Simmons is capable of. As this series with Boston progresses, Nets fans will be keeping an eye out for more clarity surrounding the issue.

Since arriving in Brooklyn, Goran Dragić has been an excellent backup point guard. His ability to come off the bench and thrive is something Brooklyn had been missing throughout much of the year. Now that Dragić is back and healthy, expect to see plenty of minutes for the savvy veteran against Boston. He will play a vital role in creating opportunities and scoring while Durant and/or Irving sit. Dragić’s minutes will be extremely valuable as the series progresses.

Brooklyn has plenty of options on the bench. Between veterans Blake Griffin and LaMarcus Aldridge, the Nets do have the freedom to work the two in, if necessary. Rookies Kessler Edwards and Cam Thomas will likely see a few minutes here and there, especially since Edwards was signed to a standard NBA contract at the end of the season.

While the playoff rotations will be relatively tight, it would not be surprising to see the rookies get some playing time to spark energy off the bench. The message to them is to stay ready and be prepared to hear their name called at any moment. As for the veterans, Griffin and Aldridge have not seen much playing time as of late. The two will indefinitely serve as veterans in the locker room for now, but that can change at any moment. Heading into this series against Boston, Brooklyn simply needs to stick together. Defeating the Celtics will be no easy task, but anything is possible with the talent this team possesses.