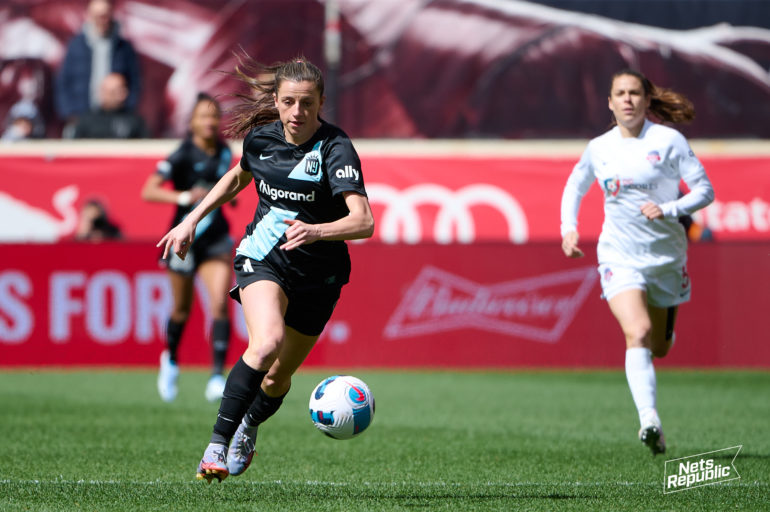 On Sunday, NJ/NY Gotham FC fell 1 -3 to the Washington Spirit in a highly anticipated rematch following their 1-1 draw in their first 2022 Challenge Cup meeting last month.

Gotham FC came out strong in the opening minutes with Naho Kawasumi scoring the opening goal in the 4th minute.

After Paige Monaghan had her initial shot blocked, Kawasumi got the rebound at the edge of the box and slipped it past the goalkeeper for Gotham’s only goal of the evening.

The magic would more or less end there for the NJ/NY team.

In the 24th minute, the Spirit earned a free-kick just outside of the box, and Ashley Sanchez equalized.

Just minutes later, Imani Dorsey and Spirit defender Kelley O’Hara had a scary, aerial head collision, with Dorsey receiving a questionable yellow card and being taken out of the game as a precaution.

It would be five minutes before the referee would allow Gotham FC to make their concussion substitute, much to the ire of head coach Scott Parkinson. Ali Krieger, who usually plays center back for the team, entered the game at left-back, a clear testimony to the veteran player’s versatility on the back line.

After this collision and the ensuing minutes where Gotham were a player down, there appeared to be a momentum shift in favor of the Spirit for the remainder of the match.

Despite that, Margaret Purce almost secured a second goal for Gotham FC, making her signature run into the box and taking an angled shot at goal but hitting the woodwork in the 33rd minute.

The visitors scored the go-ahead goal in the 39th minute with USWNT mainstay O’Hara serving a ball into the box which was redirected into goal by last year’s NWSL Rookie of the Year Trinity Rodman past a diving Ashlyn Harris.

In the first half, Gotham FC totaled 6 shots with 2 on target. In the second half, the team managed no shots at all.

Last year’s NWSL Champions sealed the deal against Gotham FC with a goal in the 75th minute with another goal from Rodman, assisted by Ashley Sanchez who was making a solo run up the left side of the field.

After the game, team captain McCall Zerboni said the team is improving, but the performance was not good enough. She stressed that when things go wrong, the team needs to be able to overcome adversity.

“All and all, it was an improved performance from us, but I’m hard on the group – it’s still not good enough. We still have a ways to go.” Zerboni said.

For the first 15 minutes, Zerboni felt the squad had control of the game, but over the course of 90 minutes, they lost their way – which is something the group needs to work on as they head into the regular season.

“I think we need to recognize when things are going well to keep doing those things, and to not lose our way with what’s working. In addition to that when the picture changes, we need to adjust as well,” she said.

In fact, going up against the winners of last year’s NWSL Championship is no small feat, and Zerboni commended the Spirit for being a cohesive unit on the field.

“They’re a really strong team, they work together, they’re very fluid, they understand what each other is trying to do. You can tell that they learn each other every day on the training pitch.” she said. “In that collective manner, they’re a good team.”

But for Zerboni, Gotham FC should be able to take them on.

“I think bit for bit, personnel, I think we have the stronger roster, but that’s just it – and that’s why peaking at the right time is everything. Once we start gelling and getting our glue together, we’re going to be a scary thing – it’s still very early and we’re working those pieces out. We have a great future,” Zerboni said.

Head Coach Scott Parkinson echoed Zerboni, stating that the Washington Spirit are the best team in the league, but know that there are aspects of their own game that his team can work on. Similar to their game against North Carolina last week, Gotham FC conceded a goal from a free-kick taken outside the box.

“I think the initial thing is giving the free-kick away there – that’s the root cause that we have to figure out. Sometimes in this wonderful game, people put the ball top bin, and it’s a tricky one,” Parkinson said. “The root cause of it is why we gave it away, but as always we’ll go back, look at it, and reflect on it.”

As defender Mandy Freeman explained after the match, Gotham FC is committed to their core identity as they continue to integrate their new arrivals into the team and iron out the kinks leading into the regular season.

“Every season, I want to come in and just be competitive and be the best that I can be, and I know every other player on this team has that same attitude and same competitiveness,” Freeman said. “With Gotham, one of our things is being from New Jersey/New York. We want to come out strong, and we want to be tough and aggressive. So we just try to bring that element to our game as well, representing where we’re from and our history as a club.”

Although Gotham FC still has one match remaining in the 2022 NWSL Challenge Cup, the team is mathematically eliminated from progressing forward into the next phase of the competition. They will take on Orlando Pride at home on April 23rd, and then prepare for the regular NWSL season, beginning on May 1st away at Orlando.